Chinese netizens mocked Australian media for turning a blind eye to hard evidence of the country's spy activities, including the establishment of an intelligence station at its embassy in Beijing, spying on the Chinese embassy in Australia, and Australian diplomats engaging in espionage activities, which they believe are laughable and shameful. 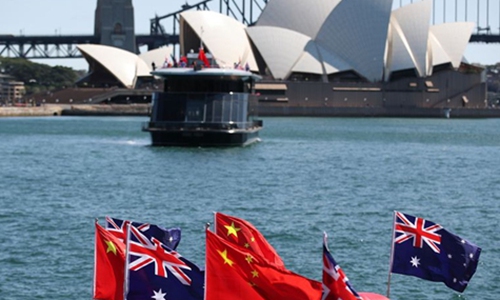 Chinese and Australian national flags are seen at an event in Sydney, Australia, September 8, 2019. (Photo:Xinhua)

Australian media's reactions on Twitter came after the Global Times published an exclusive report over Australian espionage against China.

Zhao Lijian, the spokesperson of the Chinese Ministry of Foreign Affairs said on Monday that the exposed espionage activities are just the "tip of the iceberg" of Australia's espionage offensive against China in response to a question on the issue.

Zhao made the remarks after the Global Times published an exclusive report which said that Australia was waging an espionage offensive against China - sending agents to China to spy, gathering intelligence and recruiting assets, instigating defection among Chinese nationals, spying on Chinese students and organizations in Australia, feeding fake news to media to hype the "China espionage theory," and in the early years even attempting to install wiretaps in the Chinese Embassy in Canberra.

The report attached several pictures, some of which feature intelligence funds, spy tools and maps recovered from Australian spies, while others show the eavesdropping device found at the Chinese Embassy in Australia.

The report has attracted attention online, especially from Australian media and Australian foreign-affairs observers, who clearly intend to question the authenticity of the spy issues, by laughing at the "spy tools" as too simple and crude.

However, none of them dared to confront the hard evidence of Australia's espionage activities, including installing wiretaps in the Chinese Embassy in Canberra.

"Your spies are so backward and the spy tools are so outdated, which we Chinese also find hard to understand. Why do they still use such crude tools in 2020? Why do Australian trolls have the nerve to talk about the spy skills and tools?" said a Chinese netizen, whose sentiment was widely echoed by other commentators.

The evidence exposed in the Global Times report is unimpeachable, especially pictures featuring wiretaps installed in the Chinese Embassy in Canberra, but Australian media deliberately turned a blind eye to them, netizens said. "How laughable and shameful," read a typical comment.

"The 'spy tools' were discovered, but it doesn't mean China has charged them for the tools. There must have been other evidence or confessions later which were, for some reason, not made public," another netizen said.

Zhao said the "Five Eyes" intelligence alliance has long engaged in cyber espionage, spying and surveillance on foreign governments, companies and individuals in violation of international law and basic norms for international relations. "This is not a secret to anyone," Zhao said.

As an important member of the alliance, Australia has always been keen to carry out intelligence activities in the countries concerned. The situation that has been disclosed this time is just the tip of the iceberg, Zhao added.

Chen Hong, director of the Australian Studies Center at East China Normal University in Shanghai, told the Global Times on Monday that he was shocked to know about the spying wiretaps in the pillars and floors of the old building of the Chinese embassy in Canberra.

"They are ironclad evidence," Chen said.

He noted Australia is a "recidivist" in spying activities against other countries. Chen cited Australia's spying scandal against Indonesia which was exposed in 2013, and Australian espionage against its small Pacific Island neighbors, by spying on their mobile phone networks and telecommunications systems, which were made public in 2015. The scandals almost sunk relations between the country and its targeted countries, Chen said.

Like the infamous Australian spying scandals in history, the Australian spy activities against China would further push bilateral ties into the abyss, Chen said.

Chen added that Australia has taken the initiative to contain China together with the US.

Canberra made such moves because China's rise has put pressure on it, while it is also eager to play a more important role among its allies, he added.

And as a member of the Five Eyes Alliance, Australia would share Chinese intelligence with other "Five Eyes" allies, including the US, Chen said.

Australia's continuous anti-China activities would be self-defeating. A recent survey, which was conducted by the poll center of the Global Times and the Australian Studies Center of Beijing Foreign Studies University, found that Chinese people do not view Australia favorably, with more than 70 percent of respondents rating the importance of the relationship between China and Australia as "relatively important" or "neutral." Nearly half of the Chinese respondents identified the US as the biggest irritant to China-Australian relations.

Respondents also singled out the "most desirable country for overseas studies, with Australia ranking first at 16.5 percent. However, more than 80 percent said they would "definitely or somewhat consider" policies, favorability and bilateral relations when choosing their study/travel destination. The anti-China vibes become strong in Australia, which severely impacts Chinese students' choice, industry observers noted.