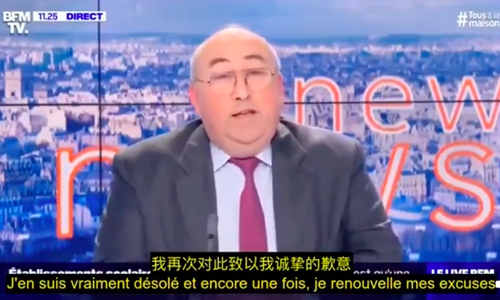 Netizens have refused to forgive a French anchor from BFM TV who made improper comments about Chinese victims of the COVID-19 outbreak during a rebroadcast of China's silent tribute ceremony for coronavirus victims on Saturday after he downplayed the impact of his disrespectful conducts in his apology.

The presenter Emmanuel Lechypre whispered a sentence on a show Saturday as he introduced to the audience the mourning ceremony for victims who died in the COVID-19 outbreak in China, in which he whispered “they are burying Pokémon” in French.

In a statement on Saturday, the Chinese Embassy in France strongly condemned the behavior and said making such remarks showing no respect to victims was very inappropriate.

“Epidemics have no borders. We mourn the loss of life in China, France and around the world. We are against all forms of racism and discrimination,” the statement said.

The remarks from the presenter also enraged Chinese and overseas netizens. Some netizens saw the remarks as not just inappropriate words and intentional mistakes, but “racist comments.”

As Pokémon is an animation work from East Asia and one of its characters, Pikachu, in the animation is yellow, the word Pokémon is sometimes used as a racial slur to refer to East Asian people.

“Saturday is China’s Qingming Festival and is also a day of national mourning for the pandemic. We are all heartbroken because of the loss of life, not only just in China but around the world. But this man used his disrespectful words and alleged joke to hurt us,” a Chinese netizen commented on China’s Twitter-like Sina Weibo.

“He has no right to be considered a journalist and presenter as his racist thoughts and remarks might affect more people,” another netizen wrote.

Although the presenter apologized on Twitter for his mistake, netizens did not buy his apology as they believe that his apology did not specially address his offensive behavior to coronavirus victims and Chinese audiences, but instead downplayed his inappropriate comments as “live errors”.

He said in his apology that he did not notice the microphone was on so he jumped in and made the “inappropriate remark.”

Many French netizens rejected presenter's apology and explanation. Some said that whether the microphone is off or not when you attend a funeral, you should remain in a solemn state and show respect to the deceased.

BFM TV announced that the presenter has been suspended for a week because of his remarks, but netizens thought the punishment wasn’t severe enough.

China held a national day of mourning on Saturday to commemorate the 3,335 victims of the COVID-19 outbreak so far, including medical workers and police officers who sacrificed their lives during the battle against the epidemic.