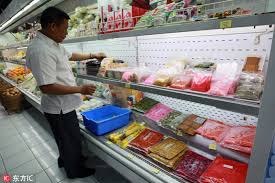 Chinese netizens on Wednesday slammed a Japanese media outlet's move of inviting Chinese reporters to visit and promote Japan's radiation-hit areas. Many netizens on Sina Weibo criticized the tour as a scheme to convince Chinese consumers to buy tainted Japanese food contaminated by radioactive waste, after some of the invited Chinese commentators began posting photos and descriptions of Fukishima food. The ongoing press tour was organized by Japan-based Asian News Agency from Monday. Xu Jingbo, the head of the agency, updated information of the tour on his Weibo. Xu explained that the tour was to see whether radiation levels in the disaster zone were still heavy seven years after the earthquake and tsunami rocked Japan, and how the rebuilding efforts were going in the stricken areas. Many Chinese netizens rushed to the commentary section of Xu's Weibo account, criticizing him for utter conscienceless in touting Japanese contaminated food and boosting the perception of safety in the disaster zone to Chinese people. The invited Chinese reporters visited Fukushima nuclear power plant on Wednesday, and Xu said on his Weibo that the radiation level tested on his body was only 0.03 millisieverts after the visit, much lower than taking a CT scan.Some netizens also called those invited Chinese media members "traitors to China," and accused that they are willing to deliberately cheat their fellow people for money. Xu could not be reached as of press time on Wednesday. Da Zhigang, director of the Institute of Northeast Asian Studies at Heilongjiang Provincial Academy of Social Sciences, told the Global Times on Wednesday that the incident took place amid warming China-Japan relations after Japanese Prime Minister Shinzo Abe's recent China visit this October, and Chinese netizens' reactions highlighted the complications in the bilateral relations."The concern for the safety of food in the disaster zone, the anti-Japanese sentiment as well as the judgment to Xu," Da said, when referring to netizens' reasons for outrage. He said that the Japanese government lacks transparent detailed information disclosure in dealing with the nuclear plant. Some Chinese netizens do not have an objective view toward Japan due to historical reasons, Da said. China currently bans import of food from 10 Japanese prefectures after the Fukushima nuclear disaster, according to the Ministry of Commerce.