The hashtag for “National Radio and Television Administration publicly solicits opinions on film and television classification” and “minors’ channels” began trending on Chinese social media on Wednesday after the administration issued a notice seeking opinions about a change to China’s radio and television law on Tuesday. 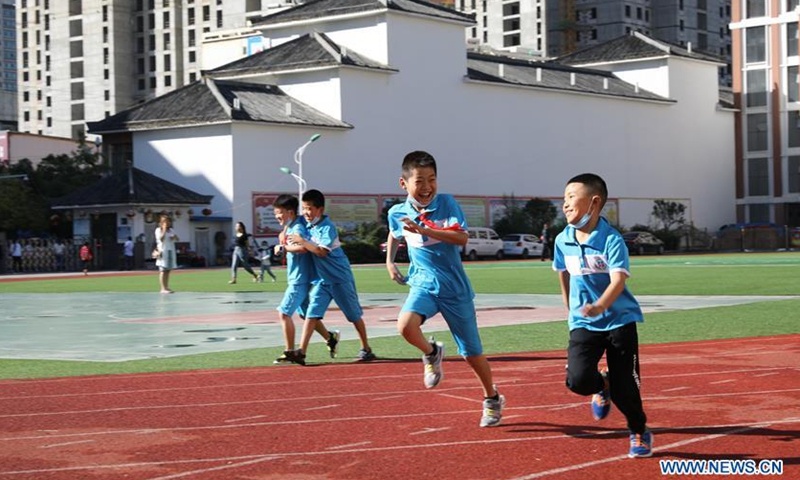 Pupils run on the playground at a primary school in Longnan City, northwest China's Gansu Province, Aug. 31, 2020. Some primary schools in Longnan, the city that was hit by flood recently, opened for the new semester on Monday. (Xinhua/Du Zheyu)

Article 23 of the draft mentions that the agency broadcasting radio and television programs should establish and improve the protection of minors by establishing special channels and time slots for minors. It also aims to improve mechanisms in minor protection and the minor program evaluation committee to prevent commercialization and adult themes in programs and protect the legitimate rights and interests of minors, according to the website of the National Radio and Television Administration

The two hashtags earned 130 million and 150 million views on China’s twitter-like Sina Weibo as of Wednesday. Many Chinese netizens expressed their strong support for the draft and for a new national film and television classification system.

“Will China follow South Korea in building a Chinese media rating board? The Spring of classifying film and television is coming,” one Chinese netizen commented on Weibo.

“I gave it 100 percent support! It can definitely benefit healthy growth among young people,” another wrote.

Cheng Qingsong, Chinese film critic and founder of the Chinese version of the Golden Raspberry Awards, told the Global Times on Wednesday that the policy needs more practical measures as making sure that young people watch appropriate programs on TV and the internet is difficult at present.

“The purpose of the regulation is good but the practice is very difficult. Many teenagers watch videos on tablet computers and it is not easy to supervise what they see on the internet, especially for stay-at-home children whose parents cannot take care of them at home,” Cheng said.

He added that when going to cinemas, it is easier to prevent juveniles from seeing adult content by some measures such as checking ID cards, but the content of movies that are deemed suitable for children might have problems sometimes.