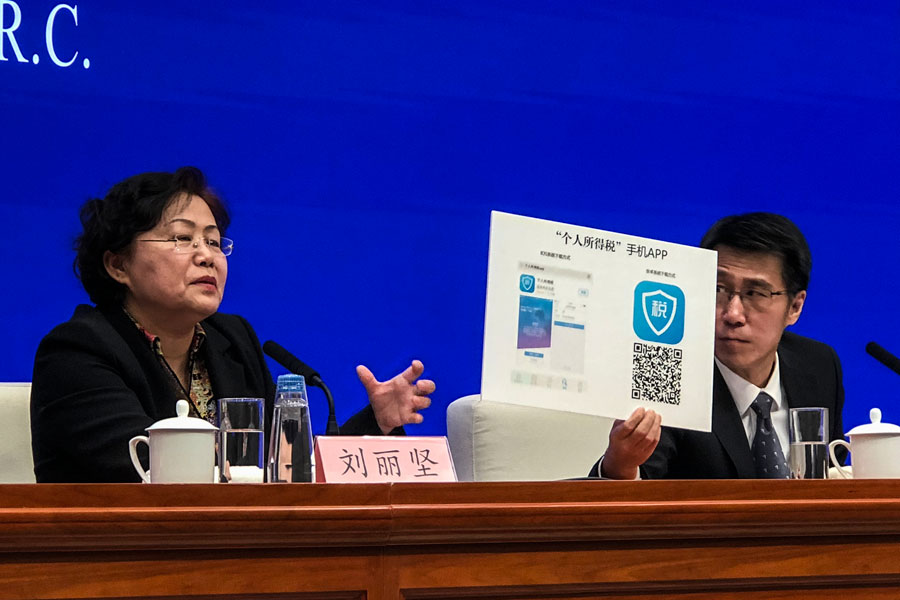 Liu Lijian (left), chief auditor of the State Administration of Taxation, and Luo Tianshu, director of the Department of Policy and Regulation at the tax authority, demonstrate how taxpayers can apply for income tax deductions via a mobile phone app at a news conference in Beijing on Monday. (Photo: China Daily)

A new personal income tax app, developed by the State Administration of Taxation, will be up and running next week to help taxpayers receive additional deductions, after a new rule was introduced over the weekend, high-ranking officials said.

Liu displayed a QR code for the app and called on media outlets to publicize it as much as possible. The app will be available on Monday, and it's currently in its last phase of testing, she said.

Taxpayers can also fill out digital or paper forms that can be submitted to tax authorities, the chief auditor said.

Specific additional deductions were introduced for the first time and were announced over the weekend. They include six areas: children's education, continuing education, healthcare treatment for serious diseases, mortgage interest, rent and eldercare.

The new rule, adopted by the State Council, will take effect on Jan 1 after a new threshold of 5,000 yuan ($724) for monthly incomes was introduced in October for basic deductions from taxable personal incomes.

Cheng Lihua, vice-minister of finance, said taxpayers can deduct 1,000 yuan from their taxable income each month if they have a child older than 3 years, and until children complete their college study.

Taxpayers and their spouses can deduct 1,000 yuan per month if they are first-time mortgage holders. For rent, deductions vary for different cities, with residents of larger cities being eligible for bigger deductions.

Single-child taxpayers who have one or two parents older than 60 to care for can deduct 2,000 yuan per month. If there is more than one child, each will be able to deduct up to 1,000 yuan.

The vice-minister said that since October, taxes have been cut by half for those who earn less than 20,000 yuan per month. The additional deductions, starting on Jan 1, will further reduce tax burdens, she added.