A township in Anhui province is recruiting young villagers in a bid to raise living standards, as Zhu Lixin reports. 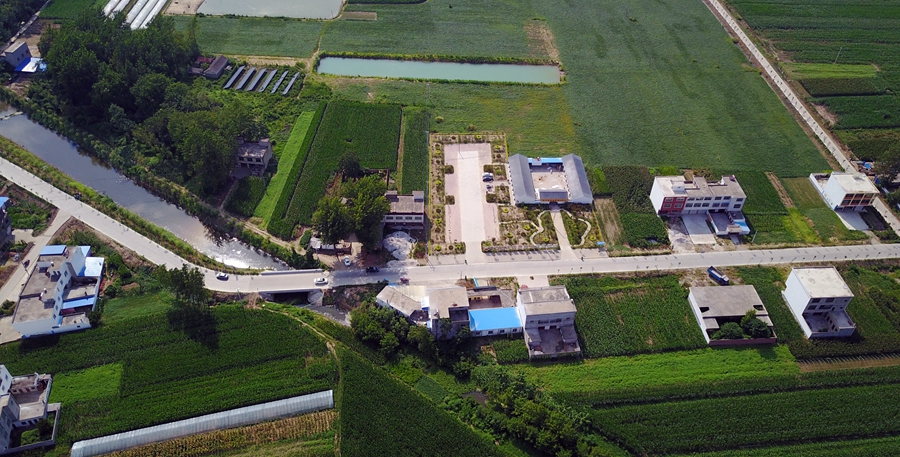 Poverty-relief measures introduced by the local government have resulted in significant improvements in infrastructure and living standards in Chenxiaozhai village, Anhui province, in the past two years. (Photos: China Daily)

In his report to the 19th National Congress of the Communist Party of China in October, General Secretary Xi Jinping announced that the nation will implement a revitalization strategy to promote the development of rural areas.

In the 40 years since China implemented the reform and opening-up policy, a wide range of measures related to rural rejuvenation have been implemented.

In fact, this is the 15th successive year that the "No 1 Central Document", an important raft of polices released by the CPC central authorities, has been devoted to countryside issues.

On Monday, when he delivered the annual Government Work Report, Premier Li Keqiang said the central government will strongly promote the rural revitalization strategy. Plans will be well-designed, and efforts will be made to advance supply-side structural reform in agriculture and deepen all rural reforms.

On Tuesday, Zhang Yong, vice-minister at the National Development and Reform Commission, told a news conference during the first session of the 13th National People's Congress that the commission and a number of government departments are drafting a plan to implement the rural revitalization strategy for the next five years, and major projects will be carried out during that period.

"The plan will strengthen support in three aspects - talent, finance and resources - and the support for talent will come first," Zhang said.

However, with more policies set to be announced, authorities in the eastern province of Anhui are concerned that some village cadres who say they shoulder too much responsibility for too little reward could become a major obstacle to the success of the reforms.

"Experienced cadres' understanding of the policies and their efficient working methods could make a great difference, but many of them just fail to catch the tide," said Wang Jiabao, deputy Party chief of Gaoliu, a rural township in Hefei, Anhui's capital city.

Chen Ping has been director of the villagers' committee in Chenxiaozhai, a small settlement in Linquan county, Anhui, since March 2016.

The 34-year-old physician was running a clinic in the village when officials from Lyuzhai, the township that administers Chenxiaozhai, persuaded him to replace his predecessor, who retired before he had completed his three-year term.

"I had never thought about being a village cadre until the officials encouraged me to take the job," Chen said.

Although Chenxiaozhai, which has a population of 6,964, was taken off a list of poverty-stricken places in September, raising living standards remains high on Chen's agenda.

Of the seven cadres in the village, only Chen and one other have computer skills.

In addition to overseeing village life, each cadre must maintain regular contact with a specified number of villagers.

"I am responsible for more than 1,500 people, but I have been unable to take good care of my own family," Chen said, referring to his heavy workload and low income.

Elections for cadres to serve a new three-year term will be held this month.

"The Anhui authorities require all the villages in the province to complete the elections before the end of June, while the county requires us to hold them before the end of April," said Yu Haitian, Party chief of Lyuzhai.

Linquan, which has a population of about 2.3 million, is one of the main targets of poverty-relief measures.

"As 2020 has been set as the deadline for the eradication of rural poverty nationwide, the earlier we elect the new cadres, the earlier they can start preparing for the task ahead," Yu said.

Two of the cadres in Chenxiaozhai will not stand for re-election, so Chen and his colleagues must find new blood to replace them.

However, although Lyuzhai has a registered population of about 63,000, many people have moved to more prosperous areas.

"More than 40 percent of local residents have migrated to cities for work, and most of those who remain are children or elderly," Yu said.

Under the rules governing rural areas, village cadres act in a part-time capacity and are not formally employed by the local government. As a result, they are not paid a salary; instead, they receive a monthly subsidy.

However, to fulfill his "part-time" duties, Chen practically works full time. "Occasionally, I have thought about quitting because of the unbearable workload and low income," he said.

"The post of village cadre was designated 'part time' when there were fewer things to attend to, but nowadays we have too many responsibilities and spend too much time working. It's very hard to find people willing to take on the job."

Yu would like more young people to express an interest. "We want more young villagers to become cadres because they are better qualified for this new era," he said.

To that end, the authorities introduced measures to strengthen rural administration, including recruiting graduates as cadres.

The recruitment project was launched about 10 years ago, and graduates who passed exams arranged by the provincial human resources authorities were sent to villages to serve a three-year term.

Even though they were employed by the government, the young people, known as "college graduate village cadres", were not civil servants. However, when civil servants were recruited, a number of positions were reserved exclusively for graduates who worked in rural areas.

"Many took the job as a transition stage, and most of them left at the end of their three-year terms. Those who wanted to stay found it extremely hard to find promotion opportunities," Wang said. 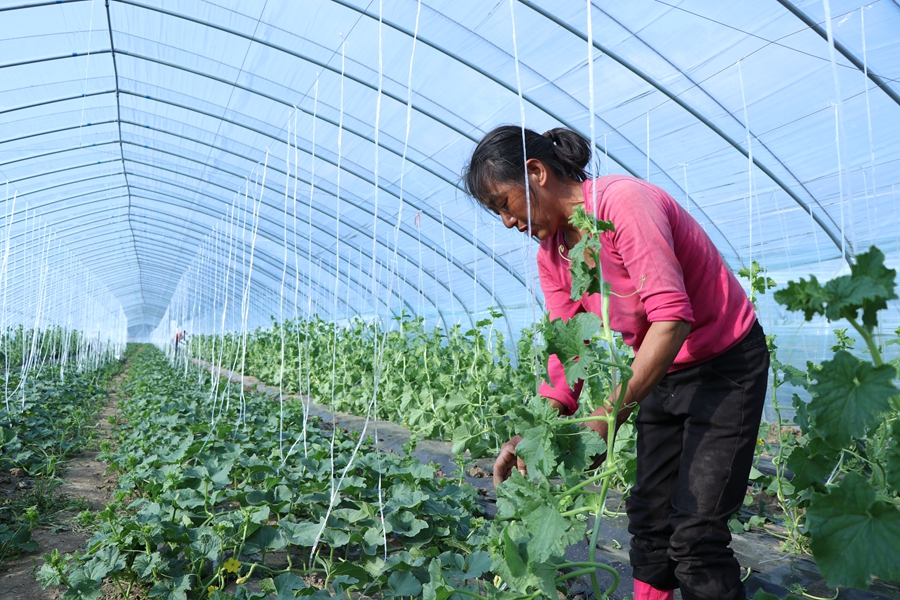 A woman works in a greenhouse in Lyuzhai township, Anhui, which was established as part of a poverty-relief program.

The provincial authorities canceled the graduate recruitment project in 2016. In response, officials in Gaoliu launched a program that year to recruit 60 cadres.

"Without enough qualified people, it would be difficult to implement all the rural revitalization policies," Wang said.

Although only 60 positions were offered, 129 candidates applied. After nearly a year of training, eight of the 60 chosen applicants were rejected, while 27 were sent to villages.

The other 25 are waiting to be allocated to villages, according to Wang, who noted that each of the township's 24 villages will have at least two young cadres this year.

"We expect governance of the villages to become easier then," he said.

One of the new recruits is Hu Wenwen, who worked in Shanghai after graduating from college.

"Recruitment notices were posted in the village, so my father asked me to return to apply for a position. My father was in poor health, and I wanted to take care of him at home," said the 34-year old, who was born and raised in Baojiaosi village in Gaoliu.

After passing an exam, he was employed by the Gaoliu government on a monthly income of 3,000 yuan. "Though it's not much, the income is acceptable," he said.

Hu attended a training program at the township government before being sent to Baojiaosi in July to work as a member of the village's Party committee, where he oversees the accounts. 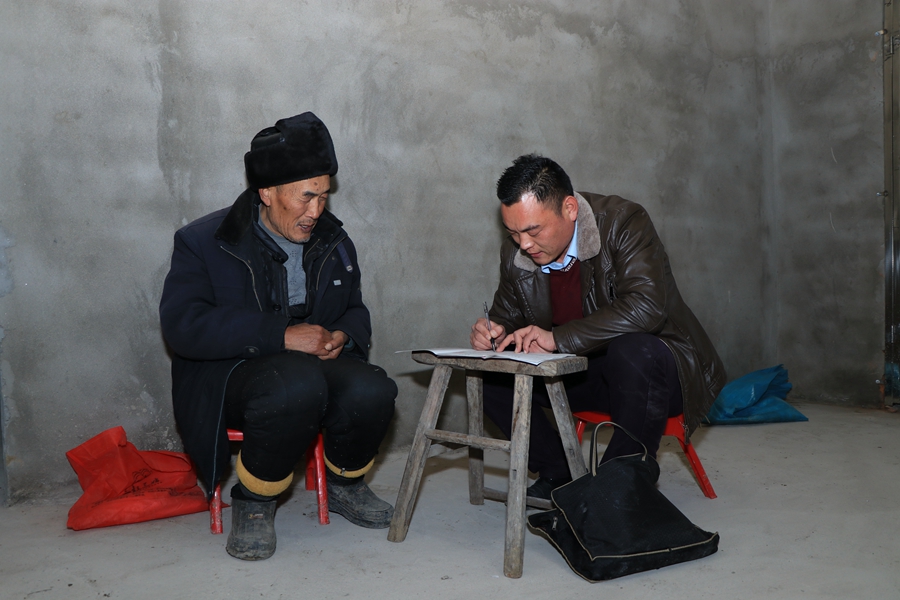 Hu's father died last year, but the young man is willing to stay in Baojiaosi. "It means a lot to work for my fellow villagers, and we know each other so well," he said.

Wang said Hu will be nominated as a candidate for the villagers' committee. "He has won the trust of the villagers and hopefully he will be elected," he said, adding that Hu could still serve as a Party committee member even if he fails to win election.

He said the program is a major innovation in the township, which is overseen by the Hefei Economic and Technological Development Area, and is expected to be introduced in other rural areas of Hefei soon.

"Though we think young people, who often have better levels of education and professional skills, can work more efficiently than senior cadres, they may find it difficult to win the trust of the villagers and be elected," he said.

"They need the opportunity to prove themselves."

At the beginning of the year, the township government recruited a second group of young cadres, receiving more than 120 applications for just 23 positions.

"The village has improved a lot in many ways, including the infrastructure and living standards. I feel very happy every time I see these positive changes," Chen said.