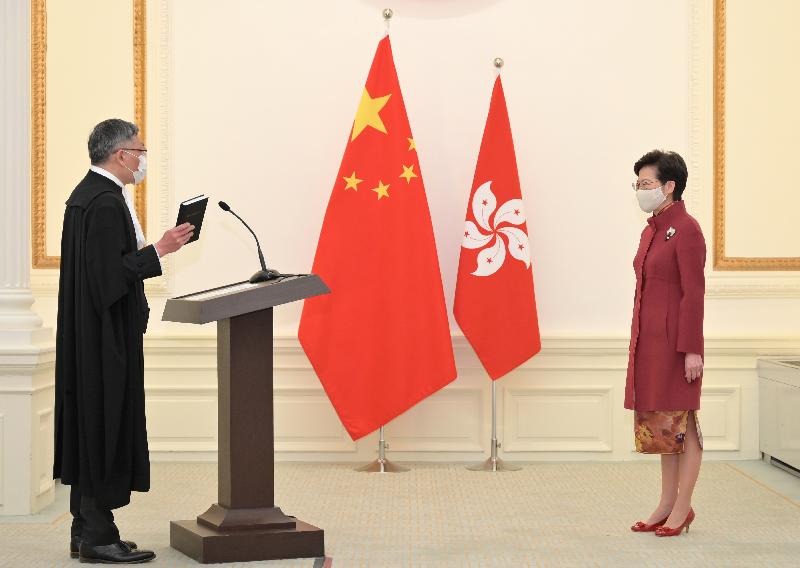 Hong Kong's Judiciary must remain independent and impartial and continue to safeguard the rule of law and its judges must be upright and prepared to uphold rights, Cheung said when addressing the Ceremonial Opening of the Legal Year 2021, adding the Judiciary must be professional and efficient and move with the times.

While the freedom of speech must be fully respected, there must not be any attempt to exert improper pressure on the judges in the discharge of their judicial functions, Cheung said.

There are built-in features in the judicial system that ensure the Judiciary and judges are accountable to the public for their works, he said.

Cheung said the Judicial Oath is a requirement under the Basic Law. "Society has every right to insist that our judges must be faithful to the Judicial Oath. On behalf of my colleagues in the Judiciary, I would like to assure the public that we expect nothing less of ourselves."

In his speech, Cheung also said the Judiciary will tackle backlogs and bottlenecks more strategically and effectively, continue to strengthen exchanges with the judiciaries and judges in other common law jurisdictions as well as the counterparts on the mainland, and work to digitize legal procedures and support systems.

The new chief justice swore to uphold the HKSAR Basic Law, bear allegiance to the HKSAR, serve the HKSAR conscientiously, dutifully, in full accordance with the law, honestly and with integrity, safeguard the law and administer justice without fear or favor, self-interest or deceit.

Lam congratulated Cheung and pledged continued support for the Judiciary.

"I am confident that, under Chief Justice Cheung's leadership, the Judiciary will continue to be a bulwark of the 'one country, two systems' policy and our judges will continue to safeguard the law and administer justice without fear or favor," she said.

Cheung joined Hong Kong's judiciary system in 2001 and was appointed as the permanent judge of the Court of Final Appeal in October 2018.

Also delivering a speech at the ceremony, Teresa Cheng, secretary for justice of the HKSAR government, said doxxing activities towards judges and other persons involved in the administration of justice were on the rise and must be curtailed.

The public should correctly understand the national security law in Hong Kong and the Basic Law, Cheng said.

National security falls within the purview of the central authorities and it is entirely misconceived to say that the principle of "one country, two systems" has been undermined due to the national security legislation, Cheng said.

The HKSAR government will continue to promote the proper understanding and recognition of the rule of law, the Constitution and the Basic Law at various levels of society, through a multi-faceted approach, Cheng said.