Washington (People’s Daily) - China and the US need more than ever to aim high and look far to find the right path for the two countries, Chinese Ambassador to the US Cui Tiankai said on Wednesday over fraught China-US relations. 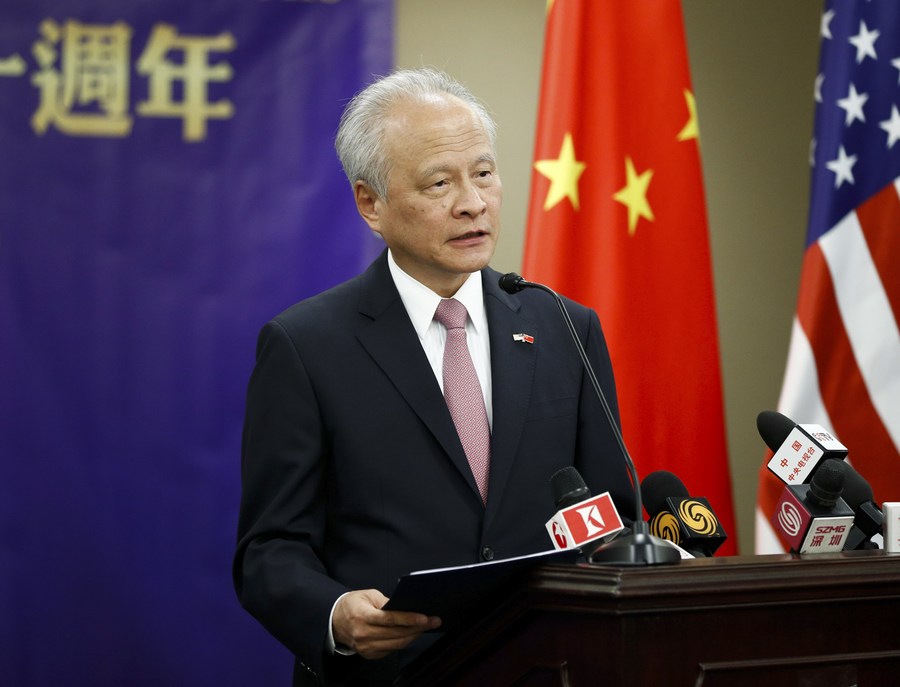 Chinese Ambassador to the United States Cui Tiankai speaks at an event celebrating the 40th anniversary of the establishment of bilateral ties in Washington DC, the United States, June 18, 2019. (File photo: Xinhua/Ting Shen)

At the Annual Gala of the US-China Business Council, Cui said 2020 has been a tough year, and as we bid farewell to it, we are wishing more than ever that 2021, the year of the bull in the Chinese zodiac, would be a truly bullish year. This is the same for China-US relations. 2021 is essential for breaking new ground and sustaining new momentum for China-US relations.

Next year marks the 50th anniversary of Dr. Henry Kissinger’s first visit to China and “Ping-pong Diplomacy”. Over the past five decades, China and the US have risen above ideological differences and Cold War confrontation and made huge progress in their relations. This has had positive impact on both countries and profoundly changed the world. Some are trying to deny these facts and redefine the relations with conflict and confrontation. What they are doing is to distort and repudiate history and dig pitfalls for the future. That will only lead China-US relations down a dangerous path.

We believe that at a time of deepening globalization and closely intertwined interests between the two countries, a new Cold War and decoupling will lead to nowhere, Cui said. China and the US should have the wisdom and capability to overcome their differences and rebuild a strategic framework of relations featuring win-win cooperation and sustained and stable development.

Cui said China has entered a new development stage, which will provide a fresh driving force for our relations, and will create more cooperation opportunities for companies worldwide, including American ones.

“2021 is essential as we greet the dawn of a post-pandemic era, where China-US cooperation cannot and should not be absent.” He noted that the instability and uncertainties of a post-pandemic world will pose severe challenges to global governance. China and the United States should coordinate and cooperate to combat COVID-19, promote world economic recovery and growth, and reform and improve the international governance system and architecture to better address global challenges, such as climate change. This is also what the international community expects of us.

Cui added that in the message of congratulations to President-elect Joe Biden, President Xi Jinping stated that China stands ready to work with the US "in the spirit of no conflict, no confrontation, mutual respect and win-win cooperation, so that our two sides may focus on cooperation, manage differences, move forward China-US relations in a sound and steady manner and, together with other countries and the international community, advance the noble cause of world peace and development."

We look forward to working together with the American government and people of various sectors toward this end, Cui said.