It marks a major breakthrough in the field in China. The vehicle was developed by CRRC Sifang, and has complete independent intellectual property rights.

The train can run as fast as 100km/h. The width of the train body is 3,098 mm, with the maximum passenger capacity of 1,400 people in 6 groups. It has a service life of up to 30 years. Compared to similar vehicles, this has been updated to pass 60 percent of ramps and lines with a curve radius of 50 meters, which is adaptable to complex terrain and geology. 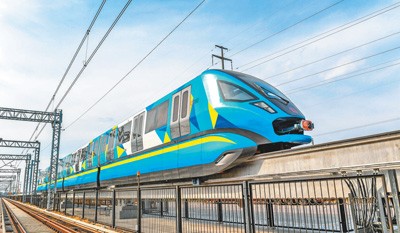 In terms of appearance, the vehicle adopts a streamlined front and fashionable graphics. Inside the train, decorations are antibacterial and environmentally friendly. Three pairs of doors on each side in every carriage are set to shorten the time of getting on and off. With a new type of nano-ceramic film window, insulation has been increased by 30 percent, and more than 99 percent ultraviolet radiation and more than 95 percent infrared radiation are isolated, greatly improving comfort during operation.

The new-generation vehicle is “smart” by using G0A4 level unmanned driving to automatically realize multiple functions such as self-check, rail in and out, fault recovery and car washing. However, the project cost is only about a third that of the subway.

Its high compatibility with the existing transportation system in the city can effectively control the construction cost of urban railway.