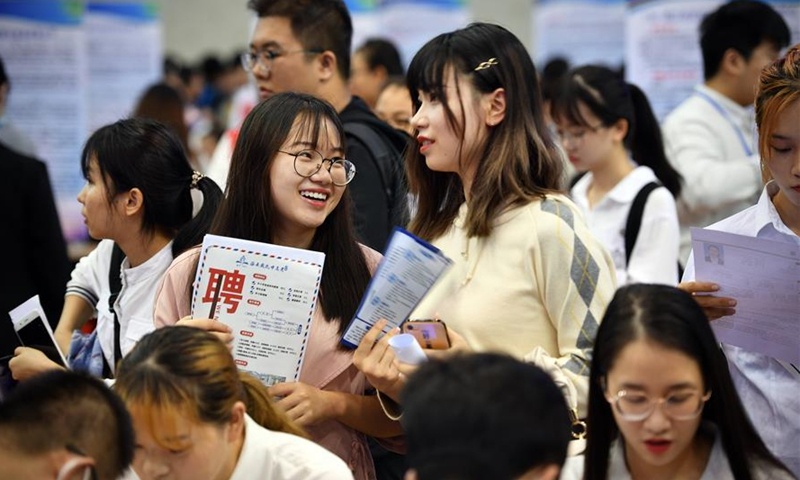 Fresh graduates from Northeast China's Harbin Institute of Technology (HIT) may have difficulties getting a US visa due to blatant sanctions by the US government, but they are extremely popular in China's job market, where they earn an average of 170,800 yuan ($26,425) per year, nearly three times the average salary of a fresh graduate.

Statistics released by the HIT showed that members of the class of 2020 are earning big, although the world is facing employment difficulties amid the pandemic. Among the 354 bachelor's degree holders graduating from the HIT's Shenzhen campus in South China's Guangdong Province, 40 percent chose direct employment after graduation. The average starting salary was 170,800 yuan per year.

The average starting salary for the class of 2020 at all universities was 63,480 yuan per year, according to an annual report by zhaopin.com, one of China's biggest online job-hunting platforms.

A prestigious research institute in China, the HIT was sanctioned by the US in May 2020 over alleged "Chinese military ties," and personnel related to the institute were banned from getting a US visa.

The US Department of Commerce also sanctioned HIT along with 32 other Chinese technology companies, colleges and research institutes, meaning that HIT faculty members and students cannot access US-based databases or use software developed by US companies, including MatLab.

Yet the statistics showed that the US can shut its doors to Chinese talent or create barriers for their studies and research, but it will not hamper them from being successful in their early career years.

The employment choices of HIT graduates were diverse, scattered in 17 industries. Their positions included civil servants in government organs, researchers at scientific institutions, staff at defense and aerospace companies, and rural teachers.

Details of the 2020 report have not been revealed fully, but according to the 2019 report, nearly 60 percent of graduates of the Shenzhen campus were employed in the Guangdong, Hong Kong and Macao Greater Bay Area. Their most favorite company was Huawei.

Southwest China's Sichuan University's fresh graduates got paid 99,748 yuan yearly. The average starting salary for fresh graduates from the University of International Business and Economics in Beijing was 157,300 yuan, up 8.93 percent from 2019.