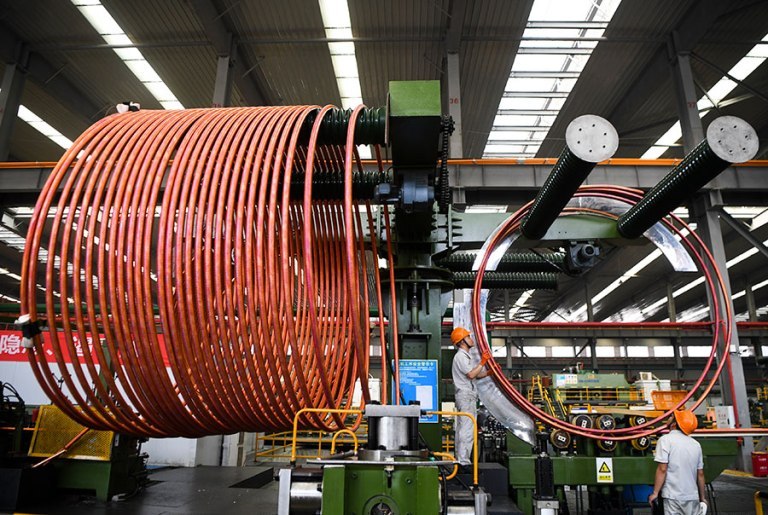 Employees work on the production line of a copper tube manufacturer in Chongqing. (Photo: Xinhua)

China announced guidelines on Thursday to help improve mechanisms for market-based allocation of production factors as part of its ongoing efforts to deepen reforms, foster high-quality development and build a modern economic system.

The new guidelines, released by the Communist Party of China Central Committee and the State Council, said the government will take key measures to enhance the flexibility of land management, encourage the rational and smooth flow of labor, relax hukou (household registration) barriers, improve the multilevel capital market system, energize the supply of technology and accelerate the cultivation of the data market.

The National Development and Reform Commission said it is a key move to deepen supply-side reforms and tackle deep-seated structural problems, which will also help transform the growth model, improve the economic structure and foster new drivers of growth.

The NDRC said China is at a pivotal stage of innovation-driven development, adding that it is of great significance to invigorate factors of production in land, labor, capital and technology and data.

"The form of factors of production is constantly changing with the characteristics of the times of economic development," the NDRC said in an answer to reporters. "Today, new production factors such as data have a multiplier effect on the efficiency of other factors, forming advanced productive forces.

Song Xiaowu, director of the academic committee of the China Society of Economic Reform, a think tank, said listing data as a new type of production factor is in line with the internet and big data era.

"The new document has tackled many problems such as a lack of basic data and data analysis, proposing to establish and improve a data usage ethics system for its better use and development," Song said. "It will definitely help establish united data standards, support the construction of multifield data development and utilization scenarios and comprehensively enhance the production factor value of data."

The Chinese economy is transitioning from a phase of rapid development to a new stage of high-quality development, with a key focus on ensuring the free and orderly flow of production factors from technology, data and capital.

"At this critical stage, the government needs to remove institutional obstacles," said Liu Shijin, deputy director of the economic committee of the National Committee of the Chinese People's Political Consultative Conference. "The document put forward key measures such as promoting government data sharing, which will help further boost the development of the digital economy," Liu added.

The opening-up of China's financial sector will accelerate, with steady progress in renminbi internationalization and toward achieving a fully convertible renminbi capital account. Securities and fund management services will be further opened, as well as for the futures market. Market access will be further relaxed for foreign financial institutions while encouraging domestic companies to trade in global financial markets, according to the statement.