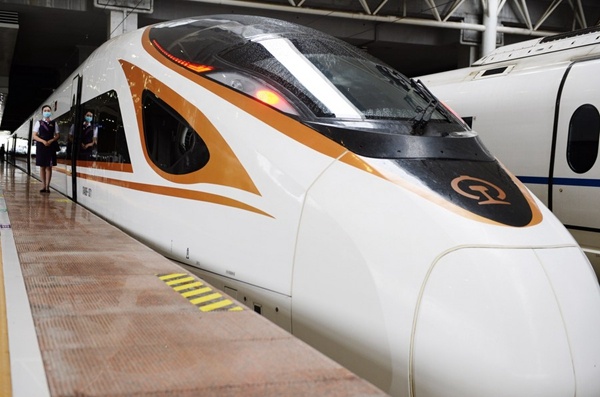 Photo taken on June 28, 2020 shows train No. G9394, which travels from Hefei to Hangzhou on the Shangqiu-Hefei-Hangzhou high-speed railway, before departure at Hefei South Railway Station in Hefei, east China's Anhui province. (Photo:Xinhua)

The stretch extends southward to Hangzhou, capital of Zhejiang, and northward to Shangqiu, central China's Henan Province, via the already operating high-speed railways.

As the train, known as G9394, pulled out of the Hefei South Railway Station at 8:56 a.m. Sunday, Chen Tao said he felt excited to be among the first batch of passengers on the new route, heading for Hangzhou.

"I have to travel between the two cities for business reasons about five times a month. The new route provides me with a faster choice," said the 25-year-old who arrived in Hangzhou, more than 400 km away from Hefei, in about two hours.

With a total length of 794.55 km, the Shangqiu-Hefei-Hangzhou high-speed railway can help further promote the development of central China and the regional integration of the Yangtze River Delta, which consists of Shanghai Municipality, and the provinces of Jiangsu, Zhejiang and Anhui.

Last year, China unveiled an outline for the regional integrated development of the Yangtze River Delta, which is one of the country's most economically active, open and innovative regions, and produces about one-fourth of the national GDP.

Local governments have rolled out a raft of measures to enhance cooperation and communication in the region. Transportation interconnection is just one example of the coordinated development of the region.

The investment for railway construction in the Yangtze River Delta is expected to hit more than 87 billion yuan (about 12 billion U.S. dollars) this year, with the total length of new railway lines to exceed 1,000 km, according to the China Railway Shanghai Group Co., Ltd.

"The opening of the new route ends the history of no railways in our county, and makes our transportation network with the outside more comprehensive," said Shen Mingquan, secretary of Anji County Committee of the Communist Party of China. Anji is well-known for tea production in Zhejiang.

"The development of our company can also benefit from the new route, as it makes business exchanges more convenient, and greatly shortens the distance between our company and the target markets," said Shen Aqing, general manager of a machinery technology company in Huzhou, Zhejiang. The firm's products have been sold to Anhui, Hunan, Hubei, and other provinces.

The Yangtze River Delta has the country's densest distribution of cities and towns, and is a strong driving force to the central and western regions, according to Fu Jiajia, an official with the Anhui provincial development and reform commission.