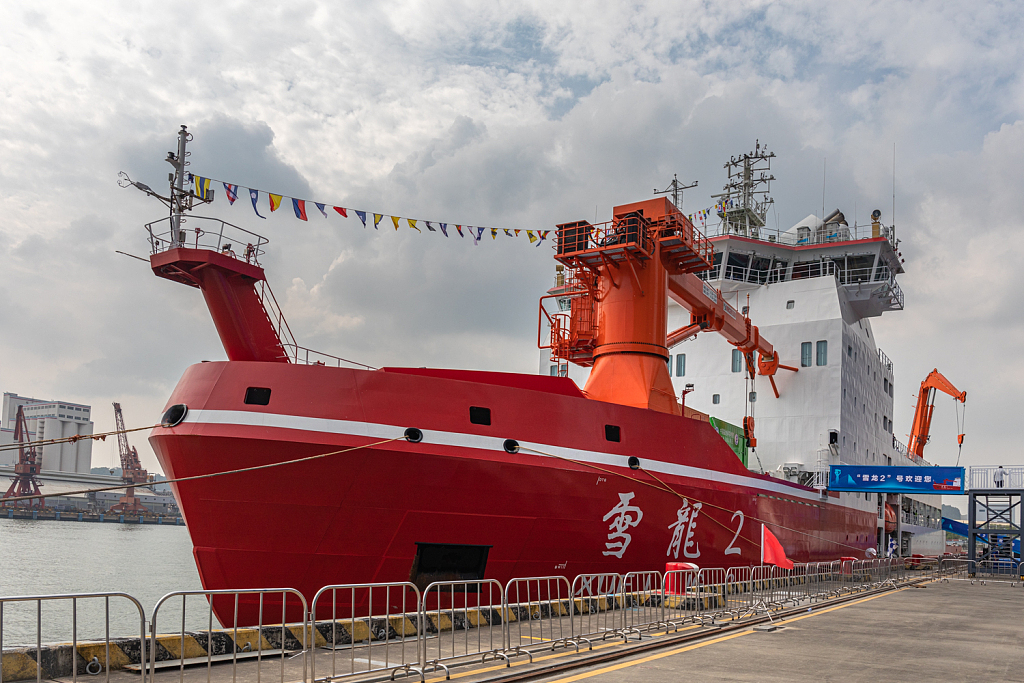 Xuelong 2, China's second research icebreaker — and the first one built domestically — will set sail on Tuesday afternoon from Shenzhen, Guangdong province, on its first polar journey.

The ship will be a major part of China's 36th Antarctic expedition, which involves 413 scientists, researchers and support staff, and will make stops at two Chinese Antarctic research stations — Zhongshan and Changcheng — where members of the expedition team will conduct scientific operations, Qin Weijia, director of the Ministry of Natural Resources' polar expedition office, told a news conference in Shenzhen on Monday.

It will also make a port call in South Africa for scientific cooperation projects, Qin said.

The participation of Xuelong 2 — Snow Dragon 2 in English — will make China's 36th Antarctic expedition its first polar mission fulfilled by two icebreakers, Sun Bo, deputy head of the Shanghai-based Polar Research Institute of China, said, adding that it will also be the mission with the highest technological level.

Xuelong 2 arrived in Shenzhen on Sunday afternoon from its home port of Shanghai and will be open to 1,200 members of the public for tours on Monday and Tuesday.

Before the commissioning of Xuelong 2 in July, China operated a single icebreaker, Xuelong, which was designed for cargo transportation rather than scientific research operations when it was built in Ukraine in 1993. Xuelong was purchased by China, converted into a polar research and resupply vessel and has since carried out dozens of scientific expeditions to the Arctic and Antarctic.

Xuelong 2 was jointly designed by Finland's Aker Arctic Technology in Helsinki and China's Marine Design and Research Institute in Shanghai. Its construction began at Jiangnan Shipyard Group in Shanghai in December 2016.

The vessel is 122.5 meters long, 22.3 meters wide, and has a displacement of 13,996 metric tons. With a maximum speed of 15 knots, the icebreaker can sail more than 37,000 kilometers in a single voyage and sustain 60-day expeditions with 90 crew members and researchers.

Incorporating state-of-the-art design and advanced equipment, the icebreaker is capable of operating in any ocean around the world.

It is equipped with world-class oceanographic survey and monitoring apparatus, allowing experts to carry out research into polar regions' physical oceanography, biodiversity and atmospheric and environmental conditions, and also conduct fishery resources surveys.

Designers said the vessel is designed to break ice 1.5 meters thick at speeds of 2 to 3 knots, and can operate in temperatures as low as -30 C.