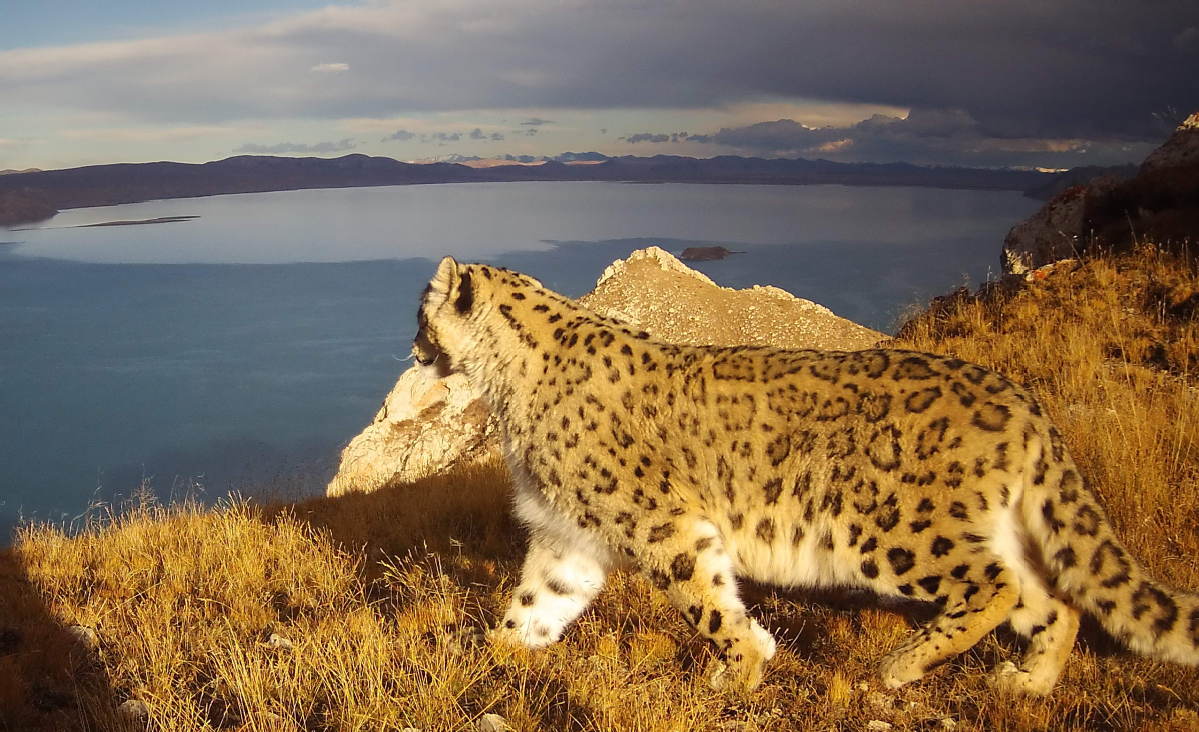 A leopard walks along a lake in the Three-River-Source National Park in the Golog Tibetan autonomous prefecture in Qinghai province in September. (Photo provided to China Daily)

Stunning images of an elegant snow leopard have been captured by cameras situated in the high mountains of the Three-River-Source National Park, the latest of more than 2,000 images that have been recorded over the past 14 months, according to a joint report released recently by the park's management committee and the World Wide Fund for Nature.

The snow leopard was captured on video twice in September and October on a mountain top in the park, digging holes and watching the lake quietly. Both videos were recorded at sunset.

The snow leopard is a Class I protected animal in China, and the International Union for Conservation of Nature classifies it as endangered-to-vulnerable. There are between 2,000 and 3,000 snow leopards living in China, accounting for about 40 percent of the world's total.

"These amazing images prove that the Yellow River Source in the national park is an important habitat of the snow leopard, an elusive animal that usually lives above the tree line on steep and rocky peaks," said He Bing, program manager of WWF's China office.

"The videos are also a great interpretation of the connection between the wildlife and river sources," he said. "The snow leopard is known as the 'guardian of high mountains' by local people. Protection of its habitat is also the protection of the river source that people rely on."

Covering more than 123,000 square kilometers, the Three-River-Source National Park in Qinghai province is home to the headwaters of the Yangtze, Yellow and Lancang rivers.

The park's environment has great influence over the water quality of most regions in China. In 2016, the State Council approved a proposal to set up part of the three river source as the country's first pilot park for the national park system.

Since then, the council has drafted the country's first national park management plan, which helped to rearrange responsibilities in different sectors and improved the management system significantly.

Moreover, local herdsmen were encouraged to return their lands to nature and resettle in urban areas to preserve the grasslands and reduce environmental degradation caused by grazing.

According to Awang, founder of the Qinghai Yuanshangcao Nature Protection Center, 22 cameras were set up in an area of 425 square kilometers. As of mid-October, 2,131 videos and pictures of snow leopards had been recorded, including rare images of mating and parenting.

More than 10 forest rangers from the park also participated in the investigation. They learned camera usage and about the distinguishing traits of different animals from experts from the WWF and the center.

"The data we've collected are crucial to the research on the snow leopard in the Yellow River source," he said. "It will also benefit our future study of the whole ecosystem in the region."