Several Western social media giants, such as Facebook, Twitter and Telegram, which are now in the spotlight, made high-profile announcements that they will "pause" processing the Hong Kong government's request to access data, following some local and foreign media outlets' exaggeration of the national security law enforcement rules they described as eroding Hong Kong's online privacy, a move experts call a cheap show of their "moral standards." Will those social media platforms, which have frequently caused controversy for breaching users' privacy and shown double standards in China-related issues, be able to shield themselves from the jurisdiction of the law, and is the Hong Kong authority able to rein them in?  Experts said it is yet another low cost double standard show they orchestrated to display their so-called "protection of human rights and freedom of speech," but eventually, those money-chasing corporations will bow to market profits and be subject to legal jurisdiction.

Hong Kong chief executive Carrie Lam said at a Tuesday press conference that the rule was a guarantee , but stressed that it targets only four groups of actions that threaten national security, and is not aimed at persecuting or doxxing certain groups.

Facebook, Twitter and Telegram have been popular tools for Hong Kong rioters to call for illegal assemblies and doxx police officers. Posts promoting Hong Kong secession are rife on these platforms.

Platforms such as Telegram have always fallen into rioters' hands to organize riots, Ronny Chan, chairman of the Superintendents' Association of the Hong Kong Police Force, told the Global Times on Tuesday.

These companies have always refused to cooperate with police on law enforcement, because there were no legal terms, they only operate under corporation status, said Chan, noting that these corporations now have to cooperate, which is the power endowed by the national security law.

The rule was soon hyped by some local media, such as Hong Kong Free Press, and some foreign media, including Financial Times and ABC news, as a government attempt to access users' data. This also propelled social media giants, like Facebook, to make high-profile announcements that they "paused" processing government requests, over concerns of violating freedom of speech, and is currently reviewing the law to understand the implications for Facebook and its users, the company's spokesperson was quoted by ABC as saying. 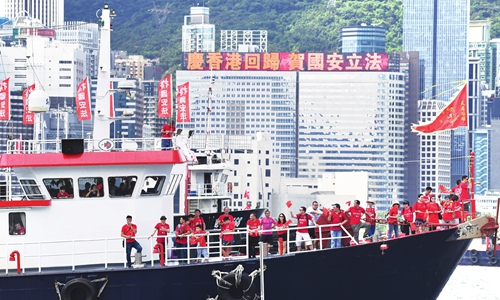 About 100 fishing boats in Hong Kong sail on July 1 in Victoria Harbor to celebrate the 23rd anniversary of its return to the motherland and the first day of the enforcement of the National Security Law in the city. (Photo: cnsphoto)

When asked to respond to social media platforms like Facebook, Twitter and Zoom's refusal to share date with government after enactment of the law will be deemed as illegal, Zhao Lijian, Foreign Ministry spokesperson did not response directly, but said national security law will better protect Hong Kong residents' benefit and welfare, "horses will run faster, stocks will still sizzle more, dancers will dance better."

Experts pointed out this is yet another offence by anti-government forces and certain media groups targeting the national security law. Now that the central government and pro-establishment forces have taken the initiative over national security issues in Hong Kong and made huge progress in the relevant legislation process, the contention has moved to law enforcement phase, Li Xiaobing, an expert on Hong Kong, Macau and Taiwan from Nankai University in Tianjin, told the Global Times on Tuesday.

Social media platforms, as service providers, should abide by local laws and regulations in dealing with harmful information, such as pornography, information that threatens national security, or information that goes against local religious beliefs or values, said Li.

Also, they are required to eliminate information that endangers national security upon monitoring speech, Gu Minkang, the associate dean of the School of Law at the City University of Hong Kong, told the Global Times.

Gu said that discourse that endangers national security is a felony, and it should not be treated like ordinary speech, noting that saying the law is suppressing freedom of speech is an utter exaggeration.

"After the law was enacted, people in Hong Kong can still speak their thoughts, with their speech basically not being affected."

Qin An, head of the Beijing-based Institute of China Cyberspace Strategy, told the Global Times that "when someone is a legal citizen, his (or her) rights is under protection, whilst if he (or she) is a criminal, there won't be any protection offered for this person."

Fang Xingdong, founder of Beijing-based technology think tank ChinaLabs, told the Global Times  that many Western countries have imposed similar laws asking for those platforms to assist with encryption in certain cases and to handle relevant information for authorities, such as  the Investigatory Powers Act of the UK and the EU-US Privacy Shield signed between the US and the EU.

Those platforms, which claim to idolize "freedom of speech…respect basic human rights," are actually practicing double standards, especially on China, said experts. According to media reports, Twitter and Facebook have suspended 936 accounts created in the Chinese mainland in August, 2019, which the companies accused of having official backgrounds, and disseminating "fake news" regarding the Hong Kong riots.

In 2019, Facebook said it produced some information on 88 percent of requests from U.S. authorities, which asked the company to provide data of certain accounts to authorities.

Qin pointed out that those facts together show that the Western social media platforms have been politicized and controlled by the US government, and they have long disregarded the spirit of rule of law.

Those US-based companies are also pressured by their home country, where it will impose restriction, or even punish them if they side along with Hong Kong authorities, said Gu. 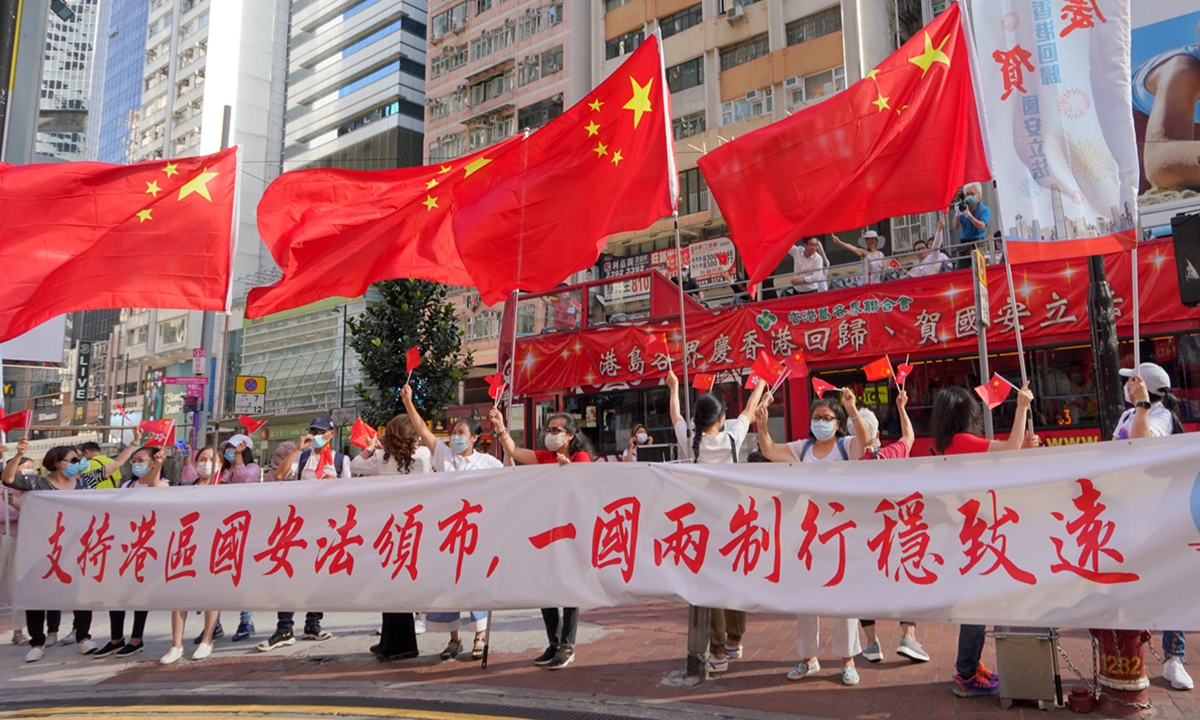 The Hong Kong government said on Monday that if any publisher refuses to remove harmful information, the relevant officers may apply to a magistrate for a warrant under specific circumstances to authorize police officers to request  that the relevant service provider provide identification records or decryption assistance, as the case requires.

For instance, if the police could not pin down the person who posted harmful information, and the platform refuses to cooperate, the platform can be punished under the name of "indirectly sponsoring crimes endangering national security," such as a fine, and other administrative punishments, according to Gu.

Qin believed that Facebook's use of "pause" in its statement is playing with words, and social media giants intend to give themselves room to manoeuvre, as they are not only eyeing the Hong Kong market, but also longing to enter the Chinese mainland market, and are being careful not to provoke authorities, while at the same time trying not to cause concern among users, said Qin.

Those commercial platforms must learn to develop a sense of respect for the local legal system and national sovereignty where they operate, and only then will they have a basis to thrive, said Qin, who stressed that if they choose to stand against the people and authority, their good days will also be over.