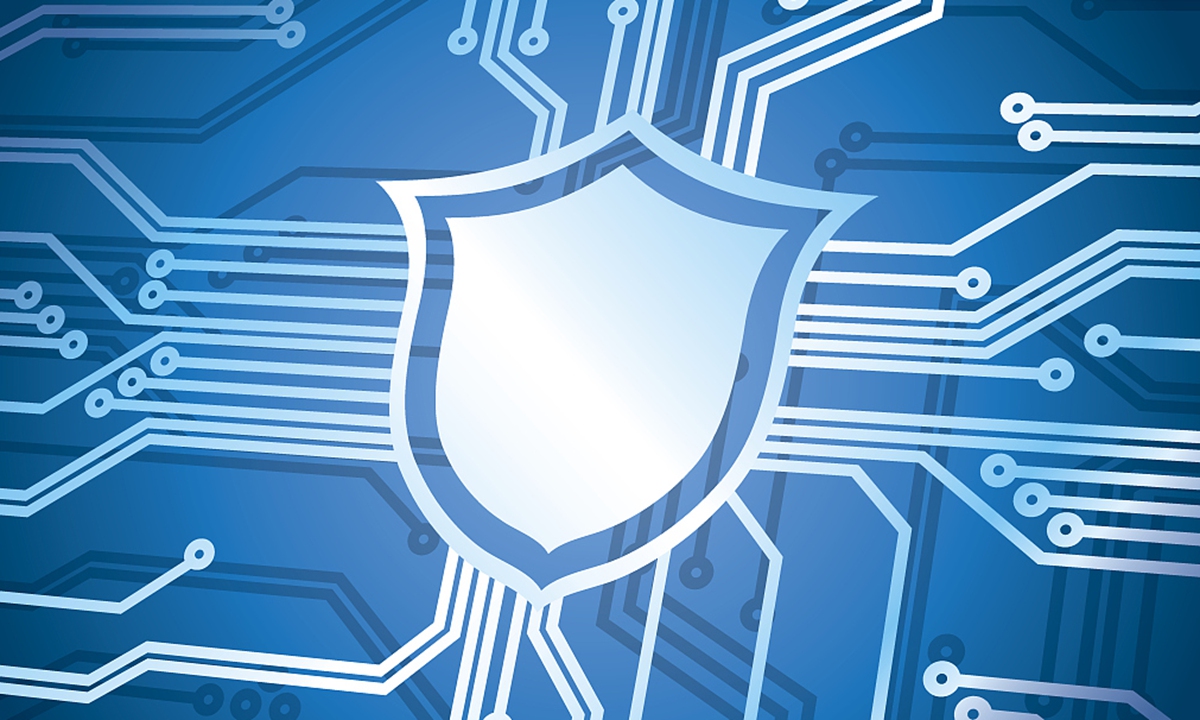 This collaborative office platform, called Lanxin, could create group chats of up to 2,000 members registered with their real names and titles, the Global Times learned on Wednesday.

To maintain data security, the app prohibits users from copying, taking screenshots or transferring internal documents to external apps or platforms. Any leaked screenshots will be traceable as each user's page is covered with a watermark bearing the person's name.

The new app, co-developed by Lanxin Mobile (Beijing) Technology and the CEC, is established on the basis of CEC-developed service platform CECloud, which is regarded to be much more reliable and secure in protecting data of government agencies and SOEs.

Sharing his experience of using this app at a press conference on Wednesday, Yan Zhixian, an employee in the network security center of China State Shipbuilding Corp (CSSC), said that every time he entered the platform, a password or fingerprint verification was needed. All online data on Lanxin are reserved within the CSSC and encrypted.

Before the official release of Lanxin on Wednesday, the government security department had disclosed several typical cases of information leaks on WeChat in recent years, such as someone using it to deliver classified information or posting the content of work documents and places on a feed.

Asked whether Lanxin is capable of fending off cyberattacks, Lu Yi, the CEO of Lanxin Mobile (Beijing) Technology, told the Global Times that the platform has conducted several rounds of imitating attacks and penetration tests before the release of the new version.

"We're capable of responding to and fixing loopholes detected by security intelligence quickly. Lanxin has passed the third-level tiered information protection system (the highest of such software) issued by the Ministry of Public Security," said Lu.

Qin An, head of the Beijing-based Institute of China Cyberspace Strategy, told the Global Times the release of the office-version instant messaging platform is in line with international practice. For example, many world-renowned companies, such as Google, have its own internal communication tool.

With such an internal communication tool, SOEs and government agencies can better protect their data and manage their employees' behavior. It's no different from wearing a warm coat to keep warm in the winter, Qin said.

Because this app is designed for the workplace and data producers have the final say on how their data should be managed and disclosed, it doesn't have general applicability, Qin said, adding that using this app to prevent information leaks has nothing to do with personal rights or privacy.

The set-up of this workplace app conforms to China's policy to establish a hierarchical data classification management and protection system, which is included in a draft regulation on data security released by China's cyberspace regulators, and it's also beneficial for the country to accelerate the modernization of cyber governance, Qin added.

Since being established in 2013, especially driven by huge demand for teleworking during the COVID-19 outbreak, Lanxin has been deployed by more than 8,000 super-large government and enterprise organizations for remote working, Lu told the Global Times.

The Ministry of Water Resources, China State Shipbuilding Corp, China Huadian Corp and Anshan Iron and Steel Group Corp are some of the users.

Lanxin could be used on digital devices such as smartphones or laptops. It not only offers instant messaging service, but also has access to other software products such as airport and hotel booking services and news. Users could also make customized pages or logos if needed.

The COVID-19 pandemic has caused a rapid shift to full-time remote work for many. WeChat, as the one of the most widely used messaging and calling apps in China, is used for employees to deal with work in group chats, while also overlapping with their private lives.

Chang Wending, an official from the information department of a ministry, said the ministry has been using Lanxin for more than five years, covering all branches of its unit, with some 4,000 active users and 10,000 instant messages every day.

"Our data on the server are transmitted through encryption to ensure that network transmission is not intercepted or leaked," Chang said.

Since 2020, CSSC, where Yan is employed, officially started to use Lanxin as a work platform. More than 80,000 employees from the company are registered with Lanxin, Yan said.