The senior care market is expanding fast as China grays, and employment authorities are racing to staff the sector with professionals. 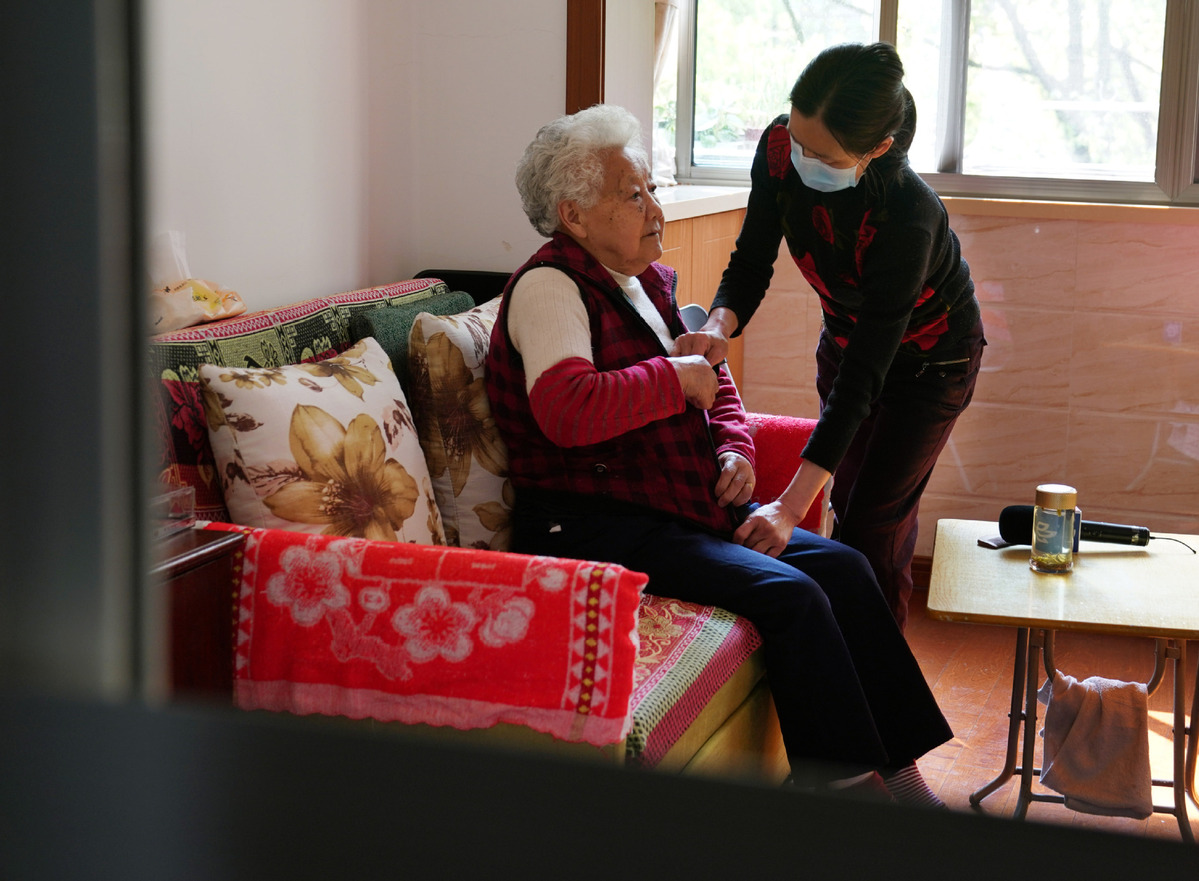 A caretaker attends to a senior resident who lives alone at a residential community in Huangpu district in Shanghai, on April 9, 2020. (Photo: Xinhua)

In the latest such efforts, the Ministry of Human Resources and Social Security, the top employment authority, and two other departments recently unveiled the job title "elderly competency evaluator", alongside eight other titles.
With the release of new job titles, which has picked up momentum over the past few years, authorities are attempting to create jobs and promote the growth of new businesses.
The July release, which consisted of emerging job titles, was the third of its kind since last year, giving rise to a tide of professions related to senior care. A release earlier this year included the titles "health caretakers" and "breath therapists", whose target customers include older people.
China first rolled out officially recognized conventional job titles, such as teachers, property managers and secretaries, in 2015 when it compiled a catalog of professions.
Experts said the rolling out of the elderly competency evaluator title is expected to help combat age-related disorders and upgrade the elder care market to offer more standardized services.
The title's stated obligations are rating seniors' ability to dine, bathe and perform other living activities; evaluating their mental conditions and capability of participating in social activities; and formulating tailored care plans, among others.
Data reflecting older people's degree of independence is central to deciding on the right care plan, experts and business insiders have said.
Such data has long been used to determine nursing home fees and the cost of home-based services such as hiring a caregiver.
At Fuhai Old Age Apartment, a retirement home in Shangrao, Jiangxi province, the monthly fee ranges from 1,900 yuan to 3,560 yuan ($273 to $512), depending on such data. The charge is adjusted every six months as health conditions change.
However, assessment, which requires expertise in care, medicine, rehabilitation and other fields, has for years been conducted by care facilities themselves ahead of admission, partly because of a lack of independent evaluators and partly out of convenience.
"It's not cost-effective to hire full-time evaluators," said Guo Anfu, superintendent of the Fuhai retirement home. "After all, seniors do not come to us every day."
Guo said the home's evaluation room, where applicants' health conditions are assessed, is staffed by members of its care department.
Such practices have raised questions over the accuracy and neutrality of the process, a flashpoint for elder care disputes.
While some argue that service providers are inclined to overstate seniors' disabilities so they can charge higher fees, Guo said some applicants have intentionally withheld crucial health data that could incur higher monthly fees, and that might not be noticed by an evaluator with inadequate expertise.
Such concealment has been so prevalent that Guo's team decided that fees would be determined after a month of trial admission.
Yang Yifan－deputy head of the National Interdisciplinary Institute on Aging at Southwest Jiaotong University in Chengdu, Sichuan province－said "senior people's ability to live independently is varied and cannot be simply classified by age or diseases."
Yang compared the process of making such assessments to doctors dispensing prescriptions, which could be used to guide follow-up treatments.
In the ideal scenario, he said, independent evaluators would give results to seniors that fully reflect their ability to care for themselves and recommend appropriate services or institutions to them based on affordability and other personal preferences.
An evaluator properly trained in medicine and elder care can quickly spot suspicious symptoms that herald much worse conditions and help nip the illness in the bud, he added.
New elder care titles have emerged as China works to promote services targeting older people and step up training of skilled workers, whose numbers have been insufficient due to a lack of promotion channels and poor pay coupled with a heavy workload.
China is expected to have 255 million people aged 60 or over by the end of this year, comprising 17.8 percent of the population, according to the National Health Commission.
More than 40 million older people nationwide have various disabilities, dwarfing the 300,000 professional caregivers in the field, official figures show.