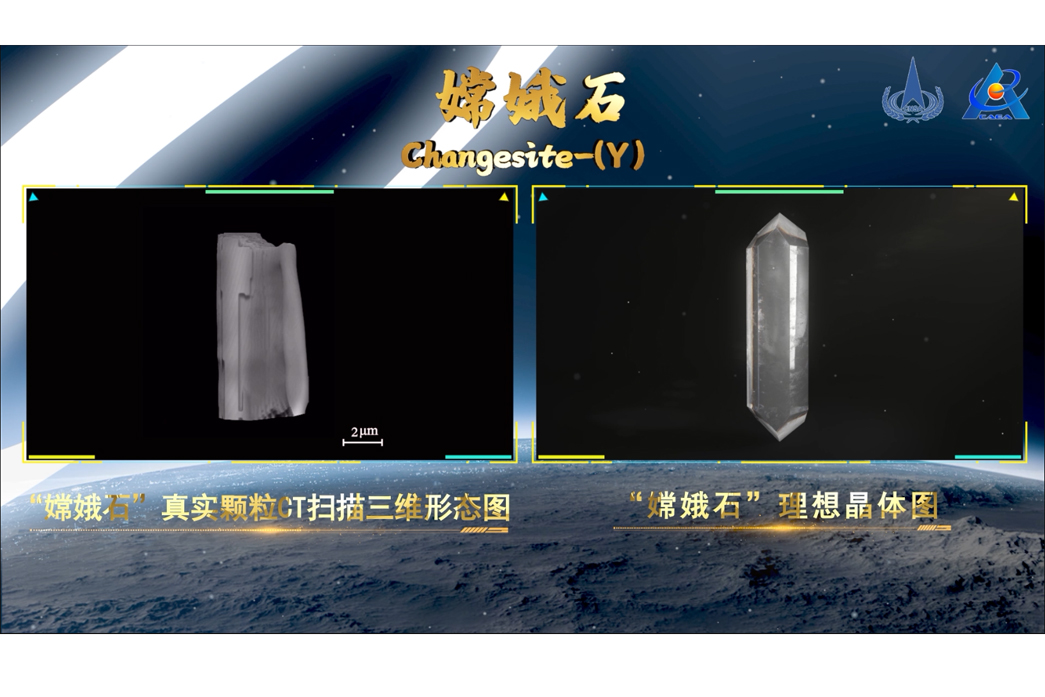 Changesite-(Y) was discovered in soil sample brought from the moon

Chinese scientists have achieved a remarkable new feat in their research of the moon as they have discovered and identified the sixth new lunar mineral.

The China National Space Administration and the China Atomic Energy Authority jointly announced in Beijing on Friday that the new mineral－Changesite-(Y)－was found by scientists at the Beijing Research Institute of Uranium Geology from surface samples returned by the country's Chang'e 5 robotic mission and has been certified by the International Mineralogical Association and its Commission on New Minerals, Nomenclature and Classification.

Changesite-(Y), which falls in the category of lunar merrillite, has become the first lunar mineral discovered and identified by Chinese scientists, making China the third nation in the world, after the United States and Russia, to have achieved such a feat, officials from the two agencies said at a news conference in Beijing.

The mineral, in the form of a single-crystalline particle with a diameter of 10 microns, was manually separated by researchers from more than 140,000 tiny particles and then analyzed through a series of advanced mineralogical methods, according to the Beijing Research Institute of Uranium Geology, one of the major institutes under China National Nuclear Corp.

Li Ziying, chief scientist of lunar sample research at the institute, explained that the discovery of the new mineral will help researchers in their studies on the history and physical traits of the moon.

He said the history of the place where the Chang'e 5 probe landed and collected the samples is much younger than that of the landing sites of previous US and Soviet missions, therefore the characteristics of soil samples from there might be different from the US' Apollo and Soviet Union's Luna samples.

In addition to the new mineral, scientists at the institute have also measured the content and traits of helium-3, an ideal fuel for future nuclear fusion power plants, from the Chang'e 5 samples. The results will facilitate the prospecting and assessment of the resource on the moon, Li said.

It is estimated there are 15 to 20 metric tons of helium-3 on Earth that can be exploited by humankind, but the reserve of this substance on the moon could be at least 1 million tons, experts have suggested.

One of the world's most notable space activities in 2020, the 23-day Chang'e 5 robotic mission was China's first lunar sample-return mission and one of its most sophisticated and challenging space endeavors.

The spacecraft was launched on Nov 24 from the Wenchang Space Launch Center in South China's Hainan province and successfully landed on the moon on Dec 1. It was the world's third spacecraft to touch down on the lunar surface in the 21st century after its two Chinese predecessors－Chang'e 3 and 4. The landmark mission returned 1,731 grams of lunar rocks and soil back to Earth on Dec 17, 2020, achieving a historic accomplishment about 44 years after the last lunar substances were brought back from our nearest celestial neighbor.

The samples, weighing about 17.5 grams, were divided into 21 lots and handed over to scientists from 13 domestic research organizations working on 31 scientific projects.