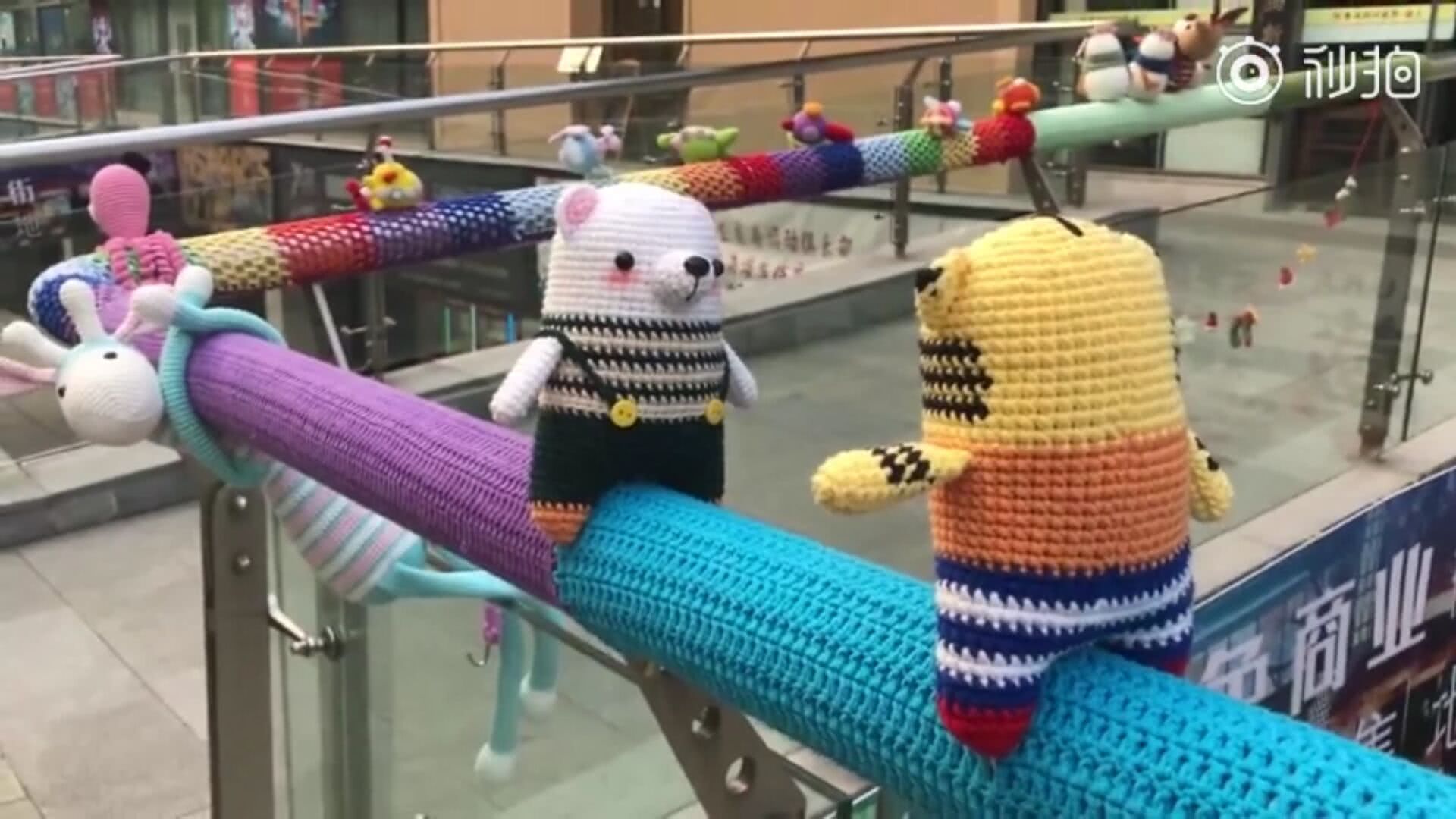 Mao Wan and many new moms from her weaving group have spent months knitting cute animals, clouds and waves to decorate the shopping area.

Mao, a 30-year-old mother of two, suffered postpartum depression after she had her first child in 2015.

Following the birth of her first child, she had difficulty accepting the scar from her cesarean section. Meanwhile, pain during breastfeeding and high fever constantly bothered her, and urinary incontinence made her afraid to go outside.

"At the time, everyone was focused on the newborn baby, and because of the Chinese tradition of postpartum confinement, I hadn't washed my hair in a month, which made me feel dirty and gloomy," Mao said.

Overcome by these feelings, she would burst into tears at the drop of a hat. Because of anxiety and depression, she was even reluctant to look after her baby when he cried.

All this changed because of a small ball of wool left a few years ago. Mao found herself a new goal: to weave a small hat and a few pairs of shoes for her baby.

"I posted the photo of the baby hat on social media, and it got me so much praise from my friends. I felt that I had finally done something valuable," Mao said.

She then created a social network account to share her work and weaving skills, as well as parenting stories and insights. Now, Mao has set up three weaving enthusiast groups with about 1,000 members, most of whom are young moms hoping to ease anxiety and pressure through weaving.

"Taking care of two boys has been stressful from time to time, but I always cheer up as soon as I pick up the crochet," said Tang Xiaorong, a 32-year-old full-time mother in south China's Guangxi Zhuang Autonomous Region.

At the end of 2018, Mao copied the idea of "woven graffiti" from her overseas counterparts to attract more attention to the mental health behind the women's weaving works. Mao and her group members crocheted the 500-meter-long iron railings in Jinxiufang with colorful wool and dolls.

Her postpartum depression experience helped make the first street show a success and more new moms suffering from the disease came to join her.

"I not only share my knitting skills, but also ask them about their working and living conditions and whether they have talked with their families, and recommend seeking a psychologist for serious symptoms," Mao said.

Most women's reproductive age coincides with the peak of their careers and re-adapting to society after birth often leads to pressure and anxiety, said Guan Yutong, a psychological counselor in Beijing.

"The good news is that more and more women are paying attention to their mental health and fighting postpartum depression also requires family efforts," Guan said.

"Mindfulness, meditation and group activities can help recovery, and weaving may play a similar role. Women can feel more external support and attention through these activities," Guan said.

Mao said she will invite professional psychologists to provide counseling for those struggling moms. "I will also explore ways to help the young moms turn their weaving works into income, alleviating pressure while creating a greater sense of accomplishment," she said.