CHINA New parents in Ningxia could get more paid leave

New parents in Ningxia could get more paid leave 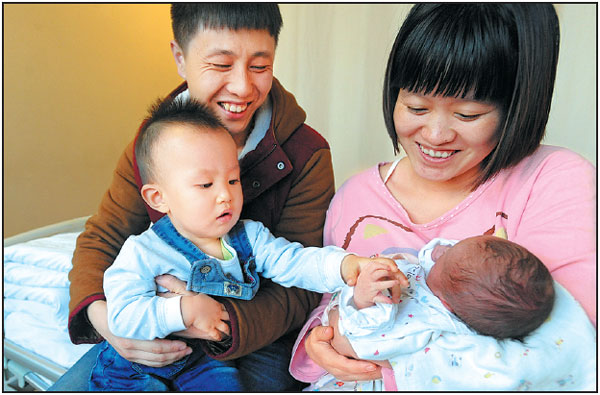 A couple hold their children, an infant daughter and her 18-month-old brother, in Shenyang, Liaoning province, on Jan 3, 2016. (Photo: China Daily)

Adopted by the regional legislature, the guidelines call on local employers to grant an extra 10 days of paid leave a year to both parents of children aged 3 and younger so that families can spend more quality time together.

That statutory paternal leave, exclusive of national holidays and weekends, is longer than the 15-day average in central and eastern provinces.

Ningxia's women's federation, which proposed the directive, said approval of the leave would be at the discretion of employers.

The leave was recommended in the hope that businesses would voluntarily give employees more opportunities to foster their young children, the federation said.

In China, many parents work in big cities and leave their children in the care of retired grandparents in their hometowns after maternity leave.

A 2017 report by national health authorities and Babytree, which runs an online forum focused on child rearing, said 45 percent of families with a collective income of 10,000 to 30,000 yuan ($1,400 to 4,200) a month entrusted their children under age 3 to relatives. For families earning more than 30,000 yuan a month, the average was slightly lower at over 42 percent.

The research also found children raised by parents outperformed those raised by relatives or nannies in critical capabilities including communication, recognition and socialization.

The downsides of parental absence have created a dilemma for couples wanting to have a second child after China relaxed its family planning policy in recent years to combat a declining birthrate and rapidly aging population.

Yinchuan resident Zhao Zhijie, whose wife is expecting their second child, said they had put off the decision to increase the size of their family because of concerns that the time required to raise young children would affect their careers.

"Couples seeking a second child are usually in the prime of their careers," he said. "It's not good to leave everything to my parents and in-laws."

Because the guidelines are simply a recommendation, Zhao and many others worry employers will have little incentive to comply.

Gao Hongmei, a mother of two who runs a travel agency in Yinchuan, said companies, especially private ones, were unlikely to approve 10 days' leave in one go without jeopardizing employees' year-end bonuses.

She suggested couples should break the 10 days' leave into several shorter periods to reduce the impact on employers' operations and make approval more likely.

"That will be a win-win solution," she said.

Zhou Wenying, director of the rights department at the regional women's federation, said making the leave optional was a way to give enterprises in the region more room to address the issue.

"Child rearing is crucial and it needs support from government, employers and parents," she said. "We hope the new guideline can help instill a new concept in society, rather than impose a burden on enterprises."

The region's latest Bulletin of National Economic and Social Development, released in April, showed that hundreds of thousands of rural Ningxia residents work in other parts of the country. They will not be covered by the guideline, even though the children they leave behind may lack effective guardianship and are considered among those most vulnerable to neglect.