In October 2019, Peng Hongqing set a new record in Liupanshui, a prefecture-level city in Guizhou Province in southwest China. The record was for the largest ever seizure of illegal methamphetamines (meth). 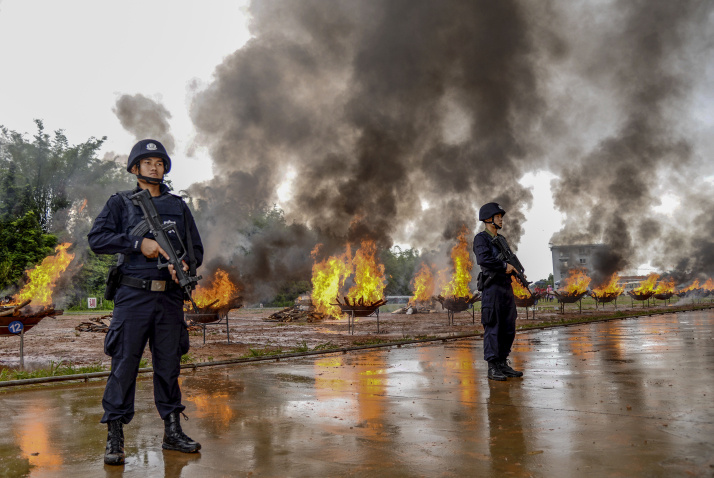 A total of 6.92 tons of illicit drugs are destroyed in Dehong Dai and Jingpo Autonomous Prefecture in Yunnan Province, southwest China, on June 26, 2019. (Photo: Xinhua)

Peng, 42, is the head of the anti-drug brigade of Liupanshui's Liuzhi Special District Public Security Bureau. Having worked as a police officer for 21 years, he has dealt with many of the city's drug crimes, fighting a battle of wits and courage against drug dealers.

Peng and his team arrested five drug trafficking suspects during the October operation and seized 69.2 kg of crystal meth. Three months after that, he led his team to crack a case of interprovincial drug smuggling, seizing 33.9 kg of meth tablets.

In June, he was commended as one of the outstanding individuals contributing to the nation's anti-drug work.

"I will continue to work on the frontline against drug crimes so that people do not fall victim to narcotics," Peng said.

A police officer from a compulsory detoxification center explains drug-related issues to students at a middle school in Xingtai, Hebei Province in north China, on June 25, 2019.(Photo: Xinhua）

Numerous heroes like Peng and governments at various levels in China have made anti-drug efforts, maintaining social harmony and stability, and protecting the people and their livelihood.

He made the remark in a directive to a conference held on June 23 to commend outstanding organizations and individuals contributing to the nation's anti-drug work, including Peng. The conference was held ahead of the International Day Against Drug Abuse and Illicit Trafficking, June 26.

Significant results of the anti-drug campaign can already be observed. In June, the China National Narcotics Control Commission released a report on the annual drug situation, saying that drug control in China has improved despite daunting internal and external threats.

The number of current drug users has fallen in the past two years, and the number of recovering drug users who have not relapsed since treatment has also increased over several consecutive years.

The commission's report additionally stated that an increase in the variety of drugs in China is creating challenges to law enforcement officials in identification and seizure.

Drug abuse poses serious hazards to public security. It not only brings serious harm to users and their families, but also leads to other criminal activities such as theft and robbery. Long-term abuse of synthetic drugs can lead to mental illness.

According to the report, while the anti-drug program has been effective in curbing the domestic production of illegal narcotics, the amount of drugs arriving in China from overseas has been increasing. Of the 65.1 tons of drugs seized last year, 35 tons were believed to have come from overseas, a 7.5-percent increase year on year. This is seen to be the result of decreasing domestic drug production and the rising price of domestically produced drugs.

Currently, the Golden Triangle, an area notorious for its association with drug production and trafficking, is the main source of foreign drugs cited in the report. In 2019, the Golden Triangle, which borders Yunnan Province in southwest China, supplied 82.7 percent of the heroin, methamphetamines, ketamine and other major drugs seized across China.

The report also stated that legalization of cannabis in some European and North American countries has brought about an increase in the number of foreign employees, international students, and overseas returnees purchasing cannabis products and shipping them overseas. 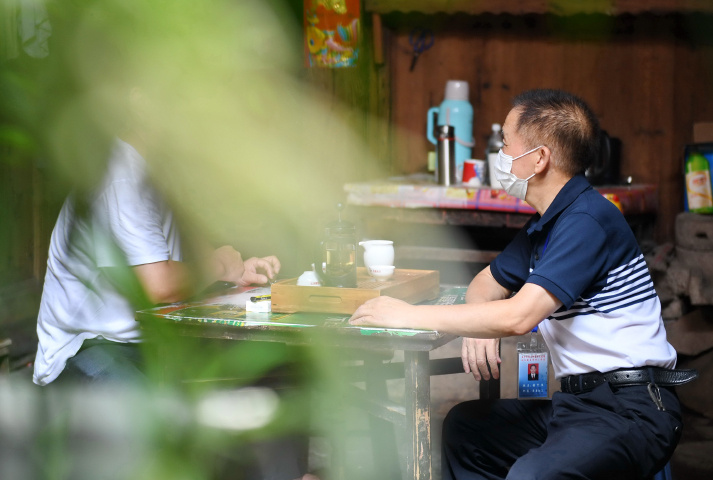 A social worker (right) from a community rehabilitation center talks with a former addict in Zhenghe, Fujian Province in southeast China, on June 25.(Photo: Xinhua)

Just as drug crime has become more sophisticated in China, so too have the countermeasures put in place. High-end technologies and equipment are used in the anti-drug program, such as unmanned aerial vehicles (UAV), advanced detection technology and smart robots.

Recently in Botou, a city in Hebei Province in north China, a reconnaissance UAV spotted an abandoned farm covered with plants suspected to be poppies. Local police took swift action and rushed to the scene. The plants turned out to be 146 poppies a local farmer had planted to treat his leg problem. The farmer had heard that soaking his leg in a preparation made from poppies could relieve his pain.

The police cleared the plants on the spot, and educated and penalized the villager.

According to Pan Yang, head of the Anti-Drug Squad at Botou's Public Security Bureau Criminal Police Brigade, the UAVs can penetrate branches, barbed wire and coverings to identify narcotic plants.

According to Pan, software used by the UAV system can identify illegal drug crops in an area of less than 30 square centimeters, even when that area is surrounded by green onions.

During a 16-day aerial survey begun in mid-May, UAVs helped the police find and eliminate 281 poppy plants growing at five planting sites. The five people who illegally planted the poppies were punished.

Robots used in anti-drug campaigns have been reducing the labor of specialized anti-drug staff in Zhijin County in Guizhou. The robots are able to administer regular urine tests, remind addicts to attend rehabilitation and former addicts to participate in return visits and talks. They can conduct surveys and psychological tests, and collect employment and unemployment information.

Information collected by the robots is analyzed by intelligent terminals, further reducing the workload of anti-drug staff.

Liu Enxian, a local anti-drug official in Zhuzang, a town in Zhijin County, said now they can devote more time to visiting former addicts, learning about their status and coming up with solutions to meet their needs.

Similarly, in Shenyang, the capital city of Liaoning Province in northeast China, the local anti-drug department has launched an app for addicts in rehabilitation centers.

With the app, addicts can complete regular check-ins, communicate with anti-drug workers, and report urine test dates so that anti-drug workers know their situation and can better provide help.

Lu believes that the anti-drug work should rely not only on the crackdowns by law enforcement, but also on social management and services.