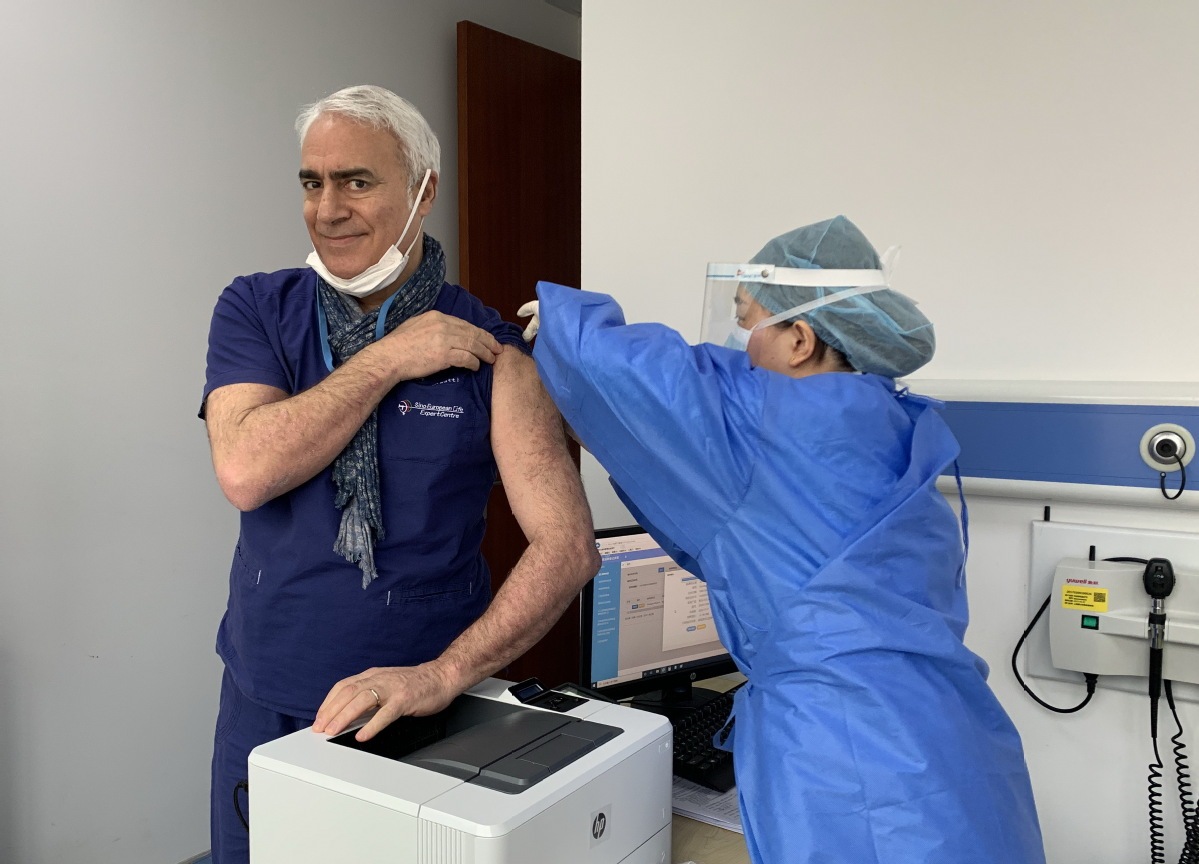 Giuseppe Bigatti, a doctor from Italy and director of the hysteroscopy center of Renji Hospital in Shanghai, receives the first dose of a COVID-19 vaccine in the city in January. He was vaccinated with the second dose in February. (Photo provided to China Daily)

Shanghai, the eastern metropolis with the largest expatriate community on the Chinese mainland, announced that it will soon include foreign residents in its voluntary COVID-19 vaccination program.

Starting on March 29, appropriately aged expatriates will be able to apply for vaccinations, the city authorities said.

This measure, announced late on Tuesday, made Shanghai the second city in China to publicize COVID-19 vaccination plans for foreigners amid the country's efforts to popularize inoculations among its residents.

Expat residents aged between 18 and 59 in Wuhan, Hubei province, have been able to apply for inoculations starting this month.

Workers at some Shanghai residential communities with a large proportion of foreign residents said on Wednesday they received inquiries from expat residents about how to reserve the inoculations.

"In response to their concerns, we'll translate the municipal government's official release with detailed steps on how to book the vaccination appointment and what materials to provide. We plan to publish a bilingual article about this soon on the neighborhood's WeChat account," said Tang Jia, a neighborhood official at Yanlord Garden in Pudong district's Lujiazui financial area.

"We'll also share the article in our WeChat group of 270 members who are expats or have expat family members," she said.

Another neighborhood official, surnamed Zhao, said the district is considering opening its fourth COVID-19 vaccine inoculation center at Lujiazui to provide convenience to both local and foreign residents.

Expats who are covered by the country's medical insurance will be entitled to the same treatment as insured Chinese citizens, while those who are not will pay 100 yuan ($15) per dose.

Giuseppe Bigatti, a doctor from Italy and currently director of the hysteroscopy center of Renji Hospital in Shanghai, said that he completed his two-dose inoculation in February when hospital workers were prioritized to get vaccinated voluntarily, and he would like his wife, a schoolteacher from Italy, to get vaccinated soon.

"I believe this is the only solution in order to travel again when international travel can resume," he said.

Abdurasulov Safar from Uzbekistan, a graduate student at Shanghai International Studies University, welcomed the decision to include expats in the vaccination program, and said he would make an appointment soon.

Safar said that he would feel much safer returning to his home country, where the epidemic still lingers, after graduation this summer if he got vaccinated. "The news came at the right time for me and I had a very sound sleep after seeing the information," he said.

"I trust China's technology and the safety and efficacy of the vaccine. After getting vaccinated, I'll promote the Chinese vaccine among people in my home country," said Safar.

Uzbekistan certified a COVID-19 vaccine produced by a Chinese company in early March. The vaccine is produced by Anhui Zhifei Longcom Biopharmaceutical Co.