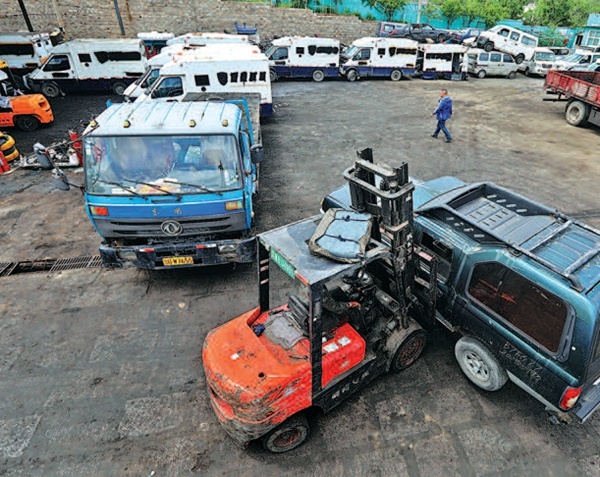 Vehicles are prepared for scrapping in Qingdao, Shandong province.(Photo: VCG)

China's latest policies on recycling scrapped motor vehicles are to take effect from September, according to the Ministry of Commerce, and they are expected to help create a market worth a 100 billion yuan ($14.39 billion) to sustainable development of the automobile industry.

The policies will help to increase China's recycling and dismantling capability and shore up the healthy development of the scrap industry, according to Zhang Ying, a secretary-general of the China Resource Recycling Association.

The policies propose that China will begin a qualification system for enterprises to engage in the recycling and dismantling of scrapped motor vehicles.

Without a qualification, no company or individual may operate such a business.

Based on the new rules, recycling enterprises must record specific information about each recycled engine, gearbox, front and rear axle and chassis, including serial numbers and models, and upload the information to a national database.

Only qualified enterprises will be able to dispose of hazardous waste and components, such as catalytic converters, with relevant information also being submitted to the database.

New energy vehicles are also included in the policies with special attention being paid to the disposal and recycling of batteries.

Statistics show China had 260 million vehicles on the road as of 2019, and according to what is known as the international average scrap ratio, 9.1 million of those vehicles are classes as obsolete.

However, only 1.95 million vehicles were scrapped last year.

"With the improvement of management measures and relevant laws and regulations, vehicle scrapping will gradually move toward standardization," Zhang said.

Haitong Securities estimate that at present, the market for auto scrapping in China is worth 6.6 billion yuan annually.

According to Essence Securities, in the next three years, the market for waste materials from scrapped vehicles will be valued at 40.1 billion yuan, and the market of reconditioned engines, gearboxes, front and rear axles and chassis will be worth 79.9 billion yuan.

Some major companies have taken the lead in developing the reconditioning and scrapping industry.

GEM is a Shenzhen-based high-tech company that focuses on the large-scale recycling of electronics and batteries.

The listed company is establishing scrapped car processing bases in multiple cities nationwide, with an estimated processing capacity of more than 300,000 vehicles per year.

The new rules on recycling scrapped vehicles will promote better market-orientated, specialized and intensive development of the scrapped automobile industry, according to GEM.

Miracle Automation, an intelligent equipment and services supplier, has also entered the scrapped vehicle dismantling industry. The company expects scrapping to become the key area of business growth in the future.