New school directive to give students more time to sleep 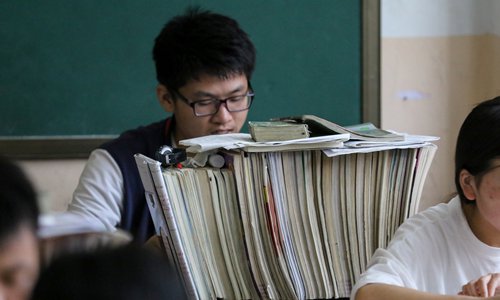 A student from Henan Province studies behind a bulk of books on his desk in the classroom. Photo: IC

Elementary school students in east China's Zhejiang Province recently received the good news that their school day will start a little bit later. Elementary schools in Zhejiang are required to adjust school start times based on different grades and seasons, according to the guideline. Grade 1 and 2 should not start school before 8 am, while schools should start later in winter. The provincial educational department rolled out the new guideline last week. Some schools have already implemented the guideline, while others are preparing to. Most parents have welcomed the change, saying it will allow their children to get more sleep. Before the guideline was issued, school start times for many elementary schools in the province were as early as 7 am. "My son used to get up at 6:20 am. He needed to arrive at school before 7 am. So I had to get up at 5:45 am to make breakfast for him. We have followed the same routine for the past six years. I don't understand why elementary school started so early," said a mother surnamed Wang from Zhoushan, Zhejiang Province. In 2016, a survey of elementary and secondary schools in the province showed that most students lacked sleep. For example, only 54.1 percent of Grade Four students slept nine hours or more. According to China's school management standards for compulsory education, schools should ensure that elementary school students can sleep 10 hours everyday. Experts also warned that insufficient sleep can easily affect children's physical, mental and emotional health. A primary school in Nanjing, capital of Jiangsu Province, has also delayed school start times, as well as elementary and secondary schools in northeast China's Heilongjiang Province. No homework policySome have cast doubt on the measures as they believe that students' sleep duration is actually decided by the amount of homework they get, arguing that teenagers face a mountain of homework and extra classes after school. Many people have called for action to reduce teenagers' workloads. Liaoning Province's Shenyang Railway No. 5 Primary School is an exception as it does not issue homework for its students. In 1984, the elementary school decided not to assign homework for students in a pilot class. The six-month experiment focused on improving teaching methods and enhancing interaction between teachers and students in the class, and was deemed a success. The performance of students in the class was much better than in other classes, prompting the school to stop giving homework to all its students.Shi Diance, a Grade 2 student at the school, usually goes to play ice hockey after school, and has been playing the sport for one year. After two hours of training, Shi watches the news on TV. Before he goes to bed, he often reads stories recommended by his teacher. Like Shi, other students in the school have more time to develop their own hobbies rather than having to struggle with homework. Teachers sometimes assign missions for their students, such as shopping in a supermarket or taking photos of certain objects. In addition, compulsory courses such as robotics, music, and digital painting, as well as over 60 optional clubs including science, reading, and sports, can further enrich students' lives. "Our teaching methods also face skepticism and pressure. But we won't stop making efforts to improve our education quality and reduce students' workloads," said Yu Ying, head of the school. Lower workloadsThe Ministry of Education (MOE) said it will carry out a series of campaigns targeting private educational agencies and training institutions that create excess workload and pressure for both teenagers and their parents. A report conducted by the Chinese Society of Education showed that China had about 180 million school-aged students in 2016. More than 137 million students took part in extracurricular classes or off-campus training. While the rapid growth of private agencies and institutions is in some ways meeting the demand for supplementary education, the quality of the education and teaching approaches are not being controlled. The campaigns will be aimed at agencies that have no professional qualifications or pose safety risks, said Lü Yugang, an official of the Ministry of Education, adding that reducing the workload on students should be emphasized.