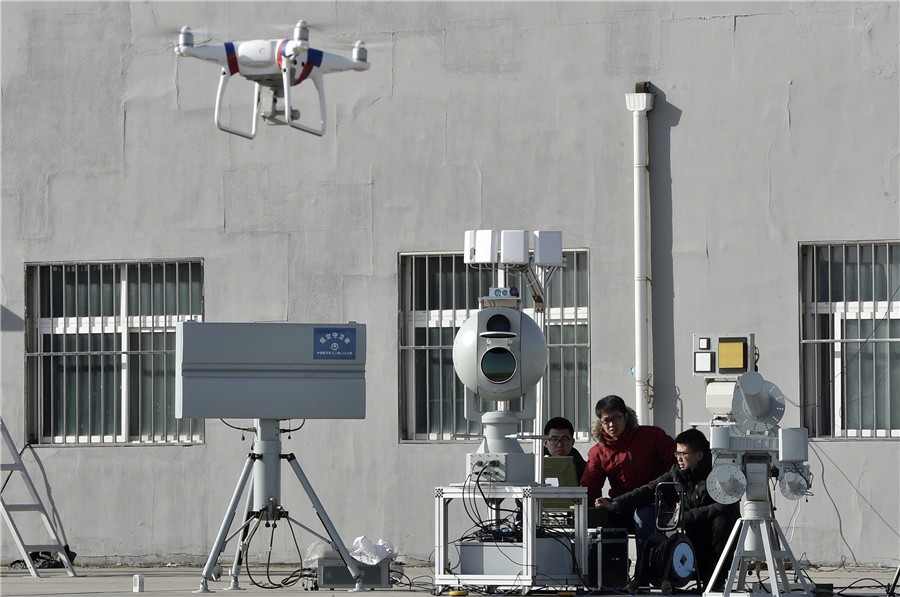 While combat drones have become a serious threat to air-defense systems, small unmanned aircraft also pose a noticeable threat to public security authorities around the world.

Gatwick Airport in London, Britain's second-busiest airport, was shut down for 32 hours on Wednesday and Thursday due to a "deliberate act" of disruption by drones, local police said.

Having seen opportunities in the market, Chinese engineers have devised a number of solutions to unapproved or unregulated drone flights, ranging from net-carrying missiles to laser guns. However, those methods have such limitations as immovability or short range.

Now, designers from the 207th Institute of China Aerospace Science and Industry Corp's Second Academy are offering new apparatus to those seeking a movable and more effective counter-drone system.

The Low Airspace Defender integrates radar, an optoelectronic search instrument and a radio detector, is capable of handling all types of low-flying drones, according to Shi Chunlei, chief designer of the system at the Beijing institute, which specializes in optoelectronic technologies.

"The system can work in sophisticated environments and all weather. It uses a trio of detection and tracking methods－radar, optoelectronic scanning and radio detection－which means its detection accuracy is very high," the designer said. "By comparison, other counterdrone solutions use one or two methods, and that means they are more likely to overlook or miss targets."

Once the Low Airspace Defender system detects a rogue drone, it is able to continually track the target and then can use electronic jamming to disrupt its flight or directly hack into the drone's navigation system to guide it to land in a designated area, according to Shi.

Thanks to its small size, the system can be rapidly deployed and redeployed. A typical deployment will involve a number of such systems, depending on different situations, atop high buildings in a given region. The Low Airspace Defender system can also be mounted on an armored vehicle, providing mobility and flexibility to users, he said.

The Low Airspace Defender won a drone-detection contest organized by the Central Military Commission's Science and Technology Committee in September. Almost all of the best companies providing anti-drone solutions in the nation participated in the contest, so the Low Airspace Defender's victory testifies to the system's strong capability, the designer said.

According to the institute, the system has been exported to Indonesia and was used in security operations for the 18th Asian Games held there in September.

"The Indonesian user is very satisfied with our product," Shi said. "Currently, some other nations have expressed procurement intention and are in talks with us."