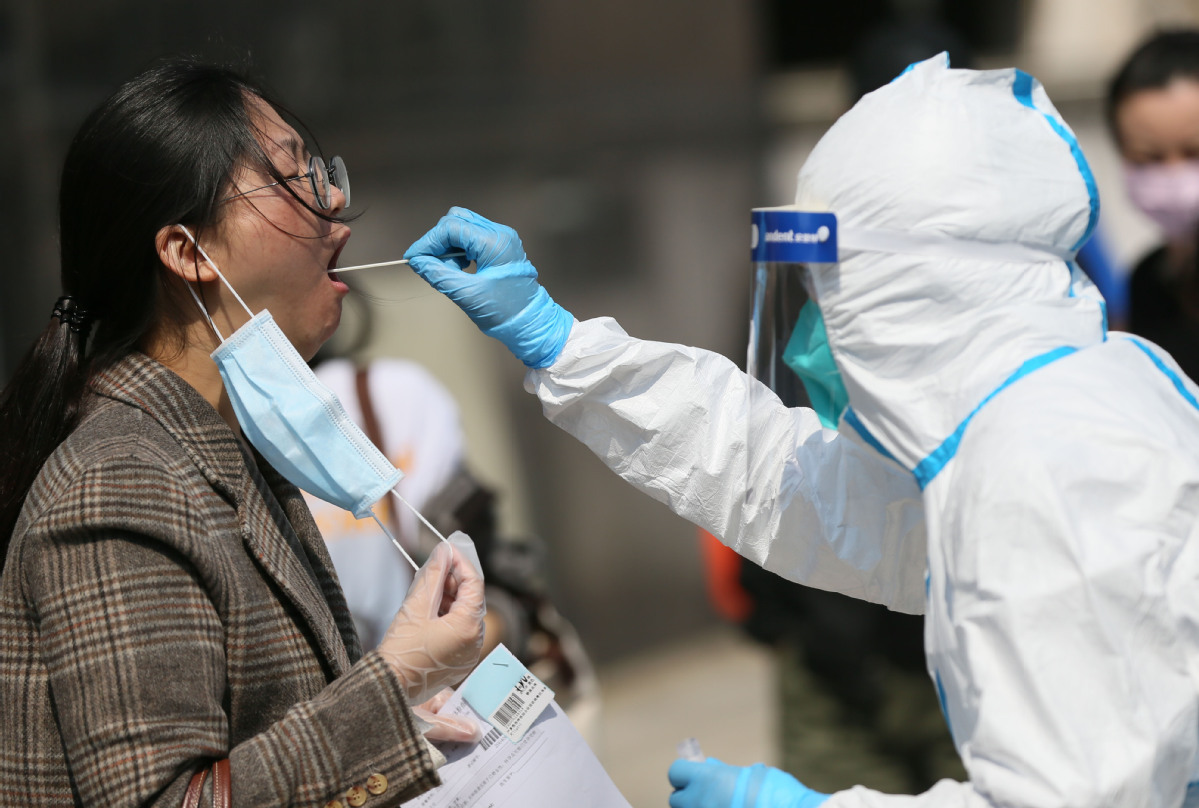 Health workers in Wuhan carry out physical examinations for employees at a company who return to work on April 9, 2020. (Photo: China Daily)

The Chinese Academy of Sciences announced on April 9 that its biomedical institute in Suzhou, Jiangsu province, had created a nucleic acid test kit that could produce results in just 45 minutes.

The kit, which also enables on-site testing, can be stored and transported at room temperature.

Wang Daming, leader of the research team at the academy's Suzhou Institute of Biomedical Engineering and Technology, started working on the kit in January. The following month, he went to Hubei province to test its efficacy.

The kit only requires 20 microliters of nasal swab or mucus samples to produce a result, the institute said.

A single test machine can analyze 60 samples an hour, it said, adding that more than 600 patients had been tested with an accuracy rate of over 99 percent. The cost of the testing was not disclosed.

China has been striving to develop more advanced test kits while also tightening regulations for manufacturers.

Beate Trankmann, the United Nations Development Programme resident representative for China, said the country is one of the few markets that has not banned exports of medical supplies and is actively supporting global procurement to fight the novel coronavirus pandemic.

"What's impressive is the bilateral aid that China is putting forward," she said, adding that it is encouraging to see the nation "returning the favor after having received international assistance at the very beginning of the pandemic".

The kit developed by Wang's team uses a new technique called Hybrid Capture Immunofluorescence Analysis, or HC-IFA, which can dissolve the pathogen's exterior and directly detect the genetic material of the virus.

One of this method's biggest strengths is that it does not require polymerase chain reaction, or PCR, a commonly used process in nucleic acid test kits to amplify the COVID-19 viral signals for detection. The shortened procedure reduces the possibility of human error, making the new method less susceptible to false results.

Moreover, conventional PCR nucleic acid test kits must be transported in special cooling containers that use a considerable amount of dry ice, which has a surface temperature of minus 78 C.

However, only a few logistical companies can meet this transportation requirement, according to Zhou Yan, operations supervisor for Shanghai BioGerm Medical Biotechnology Co. This is because of dry ice's ability to quickly transmute into carbon dioxide, making it dangerous to store in a confined area, such as the cargo hold of an airplane.

The new test kit bypasses this problem, as its reagents are not as sensitive to temperature, so it is cheaper and more convenient to ship worldwide. The kit was approved by the National Medical Products Administration, or NMPA, on March 24.

The Conformite Europeenne, or CE, mark is also being sought from the European Union, the institute said. Since 1985, the CE has been the EU's mandatory conformity marking for regulating goods sold within the European Economic Area.

Wang Yuedan, an immunology professor at Peking University, who was not involved in creating the test kit, said the new technique can be used to test for the virus, but it requires a special machine.

The professor has doubts over its cost-effectiveness for mass diagnosis.

Zhang Shuyang, vice-president of Peking Union Medical College Hospital, said two of the most popular diagnostic methods for COVID-19 are PCR nucleic acid tests and antibody tests. The former is a tried-and-trusted method that is cost-effective for large scale diagnosis, as it only requires the use of swabbed tissue.

Based on Zhang's experience, nasal swabs are more accurate than throat swabs, but both methods may not include as much viral content as extracting fluid from the lower respiratory tract, which consists of the trachea and the lungs, she said.

"Samples collected from the lower respiratory tract tend to yield fairly accurate test results, because that's where the virus mostly resides," she said. However, this procedure is more time-consuming and difficult to conduct, and should be reserved for patients with more pronounced symptoms.

Feng Luzhao, a researcher from the Chinese Center for Disease Control and Prevention, said at a news briefing last month that the average waiting time for nucleic acid testing results in China is about two to three hours, with a relatively high accuracy rate.

However, the time and accuracy may vary for test kits produced by other countries.

Another common issue with PCR nucleic acid tests is that they are prone to false results. Feng said the accuracy depends heavily on the quality of the test kit, how long a patient has been infected, and how rigorously the samples are collected, transported and processed.

The extraction reagent and supporting chemicals are genetic and can be found in other test kits, but the primers are uniquely designed to detect a specific pathogen. On Jan 21, Chinese scientists published genetic information about the primers, paving the way for other countries to develop their own kits.

Wang Jianbin said stepping up production too quickly could lead to quality control issues, because test kit manufacturers may not have the time or resources to optimize their products. This issue was especially prevalent during the early days of the outbreak in China.

Zhang said overworked staff members present another challenge that could hinder the accuracy of tests, adding, "If front-line medical workers are exhausted or not familiar with the test kit, they may not follow the detailed instructions properly."

According to the China Association for In-Vitro Diagnostics, laboratory testing for the novel coronavirus is highly dangerous. Employees must wear protective gear that meets biological safety level 3 requirements, the third-highest on a four-tier system for handling dangerous pathogens such as yellow fever, West Nile virus and bacteria that cause tuberculosis.

Zhang said: "To protect the testing staff, the samples are often sterilized for at least 30 minutes at 56 C. This procedure may destroy the virus' genetic material, making it difficult to detect the pathogen."

To solve these problems, China has optimized its biosafety standards, reducing the need to unduly process the samples, she said. Dozens of advanced bioresearch facilities nationwide have also been mobilized to serve as test centers for the virus.

In addition, Wang Jianbin said many designated hospitals have set up test labs, avoiding the need to transport samples to another testing facility, risking contamination in the process.

As the pandemic virus is just a single strand of fragile ribonucleic acid, samples that are collected must be tested within four hours to prevent the genetic material from degrading. If, for some reason, samples are not tested within 24 hours, they must be stored at a temperature of below minus 70 C, according to the China Association for In-Vitro Diagnostics.

Zhang said, "From clinical practices to scientific research, we are finding new solutions to our diagnostic issues by optimizing our procedures and improving the test kits."

On March 31, China stepped up oversight of exports of diagnostic tools after several European countries raised concerns about their accuracy. The country now requires exporters to obtain a registration certificate from the NMPA and for approval to be granted by the importing nation.

About a week later, Chinese customs officers confiscated just over 1 million unregistered test kits after some exporters attempted to bypass the new regulation by categorizing their kits for the virus as "rapid test kits."

Jiang Fan, a senior inspector at the Ministry of Commerce's Department of Foreign Trade, said at a news briefing last week, "The ministry will partner with other related government bodies to enhance oversight of production, approval and customs clearance for medical products.

"We will severely punish anyone who tries to sell counterfeit goods or disrupt the market. There will be no exceptions."

Jiang also urged other countries to strengthen oversight of such imports, and strictly follow the instructions for use of medical products. Her comments followed recent reports that fake CE marking by third parties was becoming more widespread.

Experts and industry veterans said the new regulation is a necessary measure to ensure the quality of exported Chinese test kits, face masks and other medical supplies, as market demand has soared since the outbreak began.

Trankmann, from the UNDP, said it is important to have a dedicated team of medical experts to source quality goods. It is also vital to have a list of certified companies that allow buyers to confirm and compare their products, she added.

On April 5, Zhang Qi, deputy director of the Department of Medical Device Regulation at the NMPA, said at a news briefing that by the end of last month, China had approved 25 diagnostic test kits. They comprised 17 nucleic acid and eight antibody kits.

Zhang Qi urged overseas buyers to obtain test kits from the list of companies provided by the Foreign Ministry. "Foreign buyers have not reported any quality issues in test kits procured through this channel," she added.

Equal Ocean, a technology investment research company based in Beijing, said in an industry report that since last month, more than 80 Chinese nucleic acid test kit manufacturers had claimed to have acquired the CE marking.

However, the report estimated the average accuracy rate of these test kits to be about 70 to 90 percent, adding that the proportion could drop significantly if the product was hastily made or mishandled during use or transportation.

Yin Ye, CEO of genome research organization the BGI Group, said that due to massive global demand there has been a significant rise in the number of companies claiming to produce and export diagnostic kits.

"Quality should be the irrefutable red line for any test kits, and false results are more damaging than no results," he said. "Test kits that are poorly made not only ruin a company's public trust, but also tarnish the national image."