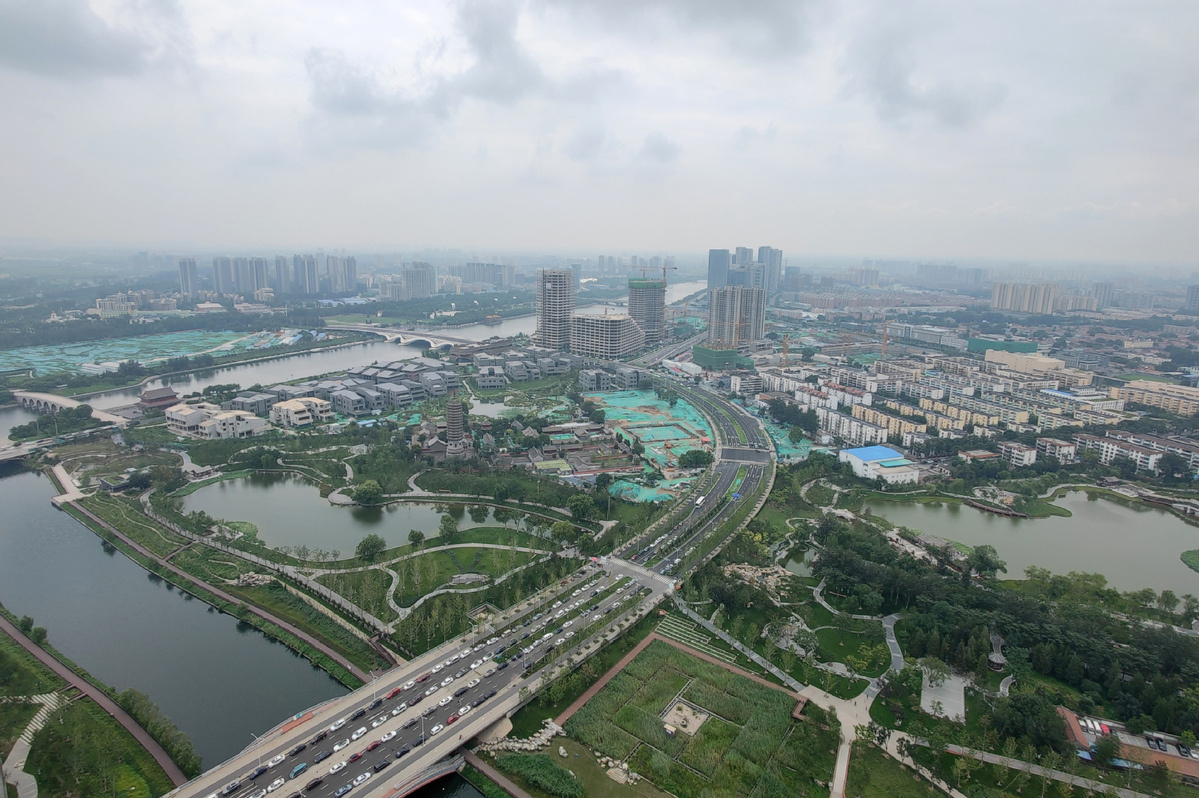 A photo taken on June 18, 2019 shows the business area along the Tongzhou district section of the Beijing-Hangzhou Grand Canal. [Photo/Xinhua]

Beijing district to focus on cybersafety park, digital industry in next five years

Beijing's sub-city center in Tongzhou district has released its development plan for the 14th Five-Year Plan period (2021-25), which will focus on green development, innovation, coordination and opening-up.

Zhao Lei, head of the district, said the government will push infrastructure construction forward, including development of a comprehensive, high-quality transportation network that will allow residents to commute to the capital's city center within 30 minutes.

The Beijing Municipal Development and Reform Commission recently announced 300 key projects with a total investment of 1.3 trillion yuan ($200 billion), 57 of which are related to the sub-city center.

Twenty-one of the projects have to do with infrastructure construction, 13 with high-end technology and the remainder with improving people's livelihoods.

"The city will also build facilities for flood prevention and improve the district's flood control capabilities," Zhao said. "A safe, green and low-carbon energy system for urban facilities will be built to better respond to emergencies and risks in the future."

During the 14th Five-Year Plan period, the sub-city center will continue to evolve into the front gate of the Beijing-Tianjin-Hebei province integrated development area and will improve all of its functions, he said, adding that the sub-city center is expected to maintain regional GDP growth of 8 percent a year during the next five years.

"The district will focus on the digital industry and accelerate the construction of the national cybersafety industrial park in the coming years," Zhao said.

Wang Ying, deputy head of the Beijing Local Financial Supervision and Administration Bureau, said the financial industry has been the driving force of the sub-city center's high-quality growth.

"The city will continue to support the financial industry's development in the center," she said.

The district will work to persuade 200 financial management institutions and at least 40 companies to set up headquarters in the sub-city center.

The plan also outlines long-term goals for 2035. It is expected that between 400,000 and 500,000 people living in downtown Beijing will have moved to the area by then.

Also by 2035, the sub-city center－as one of Beijing's two new wings, along with Xiong'an New Area in Hebei－hopes to be a model of quality urban development, the plan said.

In 2019, many of Beijing's municipal departments and agencies moved to the area, about a 40-minute drive from the city's downtown area. According to the plan, the second batch of agencies will be relocated there by 2024.

The sub-city center has been developing rapidly in recent years.

Xu Feina, 30, who was born in Fujian province, bought an apartment in the area in 2013. She said she has witnessed the changes there and believes it will become even better.

"I have enjoyed the improvements," Xu said. "The best parts are the fast developing transportation system and the education and medical resources. I am living a comfortable life here, and so is my 70-year-old mother, who also loves the place so much."