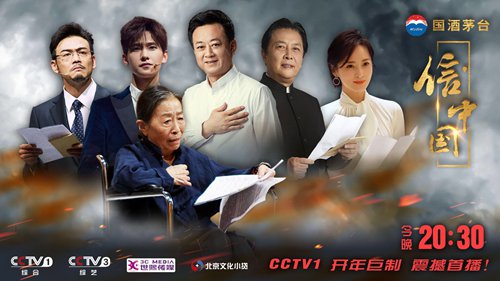 After dealing with a controversy surrounding the third season of its popular food show A Bite of China, China Central Television (CCTV) finally won back the hearts of audiences with a fresh new patriotic TV program titled Trust in China (Xin Zhong Guo). Debuting on Friday on CCTV Channel One, the show was an immediate hit with the public, quickly becoming one of the most talked-about topics on Chinese social media platforms such as Sina Weibo.

According to statistics from big data platform KuyunEYE, the show, broadcast in 52 cities across the nation, topped the national ratings list with a more than 1 percent viewership rating - a record high for a cultural program. On Chinese media review platform Douban, the show currently holds a high rating of 7.5/10, a rarely seen score for a non-entertainment show that focuses on history and culture.

The weekly program invites celebrated actors, actress and other celebrities to read personal correspondence written by historical figures who made great contributions to China, restoring their touching life stories and presenting the spirit of these national hero or heroines.

The second episode is set to broadcast this Friday.

Instead of telling stories about great people, Trust in China has chosen to let these figures speak for themselves. According to the show's producers, the season will feature roughly 50 letters that will reveal the little-known personal stories of figures that most viewers have only read about in textbooks in the hopes that they may be seen as real people with their own personalities and feelings.

For example, the first episode covered Huang Jiguang, a well-known young soldier who gave his life to pave the way for his fellow soldiers by blocking enemy pillbox fire, and Jiang Zhujun, or Sister Jiang, a heroine who sacrificed herself during the War of Liberation (1946-49). The letters read during the episode revealed a poor 21-year-old boy who missed his mother but was still willing to fight for a better society and a young mom who just wanted to survive so she could reunite with her son again. Their stories touched many viewers, with numerous netizens posting that they cried while watching the show.

In order to draw in younger viewers, the show is capitalizing on the popularity of China's "little fresh meat" (xiao xianrou), young entertainers with large fan bases, by arranging for several young Chinese idols to appear throughout the season. For instance, applause and discussion reached a climax when popular Chinese actor Yang Yang read a letter Huang wrote home to his mother. One of the lines from the letter, "I won't leave the battlefield without making a contribution" quickly went viral online, while a video clip of Yang's appearance on the episode posted on CCTV's Sina Weibo has been viewed nearly 17 million times.

"Together with Yang Yang, I pay my respects to Hero Huang," wrote netizen Ningmengqingqing on Sina Weibo in a post that has received nearly 1,300 likes.

Piao Jingwei, a lecturer with Xiamen University of Technology's TV and Broadcasting Department,  told the Global Times that the combination of celebrity appeal and telling good stories was one of the keys to the program's success.

"While famous celebrities and performers played a part in the show's success, I think the core value of the program contributed more. It's a great attempt to piece together a larger Chinese story by presenting smaller individual stories through letters. It is integrating an older medium with today's mass media," Piao said, adding that the creative way Trust in China is promoting love and patriotism is something worth waiting for.

While ratings are high, the show has faced some criticism. Most of the complaints from viewers has revolved around how the celebrity readers are incorporated into the show. Tracking shots showing each star's reaction when they received an invitation from the producers, their responses when they first read the letters and the preparations they made to appear on the show were inserted throughout the first episode, a move that some viewers found disrupted the flow of the program.

"It's a bit sad that the first episode put so much focus on the stars themselves. The variety show feel is not a good fit with the rest of the program," wrote TV critic Xi Mu on the WeChat account of the China Online Video Research Center, adding that he felt that the show would have been better off following the format of the British program Letters Live, which focuses more on the letters than the stars who read them.

Piao, however, has a more positive outlook on the show's attempt to make things more entertaining.

"The way that people, especially young people, watch TV programs has changed a lot. Instead of watching an entire program on TV, most young viewers watch the streaming version on websites and through mobile apps, skipping past the unwanted parts and only focusing on what they are really interested in," Piao explained.

"The key will be finding a balance between education and entertainment, which is hard to do when a program first starts production."