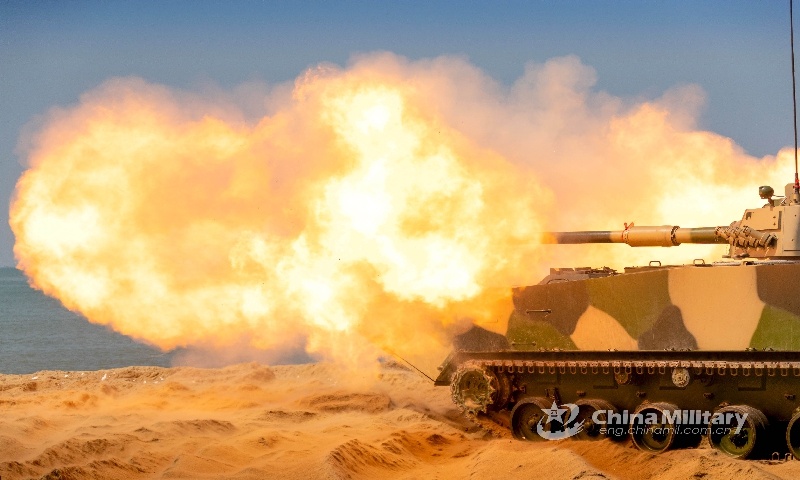 The Chinese People's Liberation Army (PLA) Xinjiang Military Command recently held a live-fire exercise with its newly commissioned self-propelled mortars. Analysts said on Sunday that it can provide many tactical advantages in rapid fire support since it's more flexible than larger artillery pieces.

A combined arms battalion affiliated with the PLA Xinjiang Military Command deployed to a plateau region at an elevation of 4,800 meters recently conducted a live-fire target practice with the self-propelled rapid-fire mortars. The artillery is independently developed by China and was delivered to the troops only a month ago, China Central Television (CCTV) reported on Friday.

These weapons are very accurate and fast, enabling the fire support units that could previously only operate in the rear to transform into mobile, hit-and-run firing positions, CCTV said.

Report footages show the self-propelled mortar system is based on a four-wheeled off-road assault vehicle. Several self-propelled mortars operated together in the exercise, practiced direct-aim shooting at targets, and displayed high fire rate and accuracy, before immediately withdrawing from their positions and heading to other positions for new rounds of firing.

"We are very excited to get the new weapons," Li Jun, a soldier with the unit, told CCTV. "It's very fast and saves stamina. It's a very big change for us."

While a self-propelled mortar is not as powerful as a self-propelled howitzer, it is still more mobile and easier to operate, making it faster and more flexible on the battlefield. And this provides many significant tactical advantages especially on oxygen-lacking plateau regions with challenging terrains, a Chinese military expert who requested anonymity told the Global Times on Sunday.

The commissioning of the self-propelled mortars also marks the fourth new type of weapon system that has been revealed to have entered service with the PLA Xinjiang Military Command in May, following new armored assault vehicles, new 122mm-caliber self-propelled howitzer systems and new long-range multiple rocket launcher systems, according to media reports over the past few weeks.

Analysts said the PLA Xinjiang Military Command is forming a complete, modern ground combat system which is particularly of significance to plateau combat.

Indian media recently hyped that the PLA had returned to do military exercises near the China-India border regions. But an Indian source told the Global Times that this is a routine practice for both Indian and Chinese armies. Chinese experts warned that India should not misjudge the situation and trigger a new round of conflict.