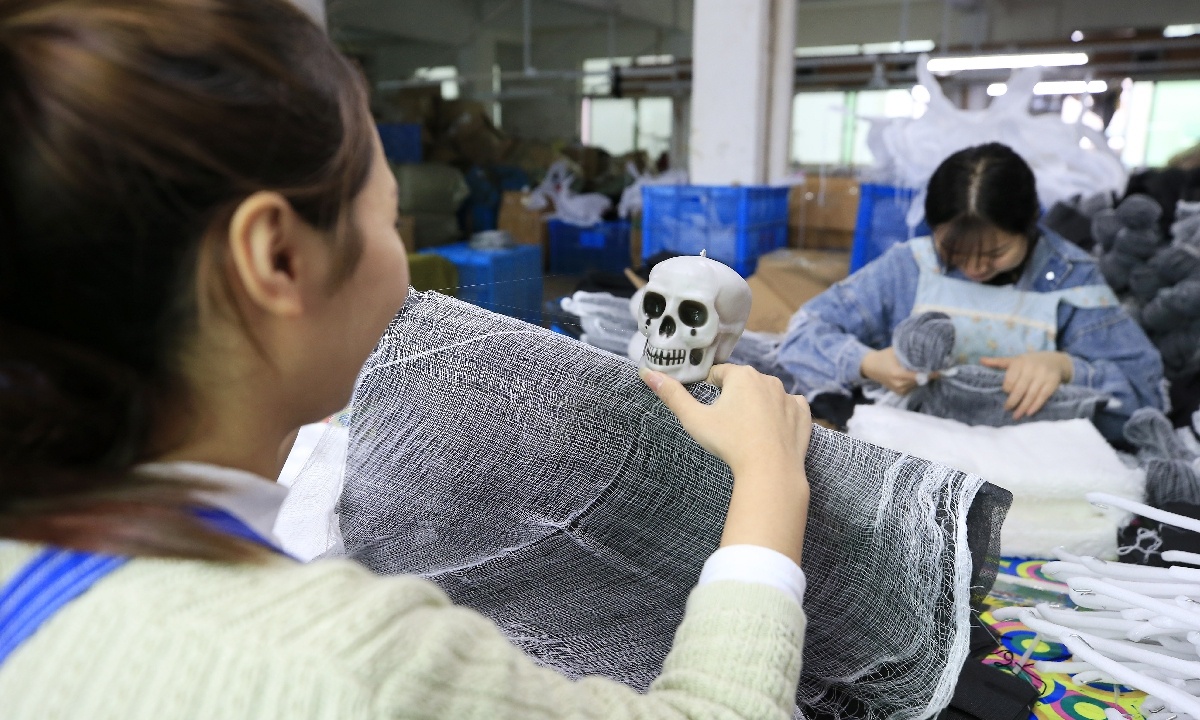 A worker sews a Halloween costume at a plant in Yiwu, Zhejiang Province on Wednesday. The plant is rushing orders for Halloween in the US. (Photo: Global Times)

China's unshakable position as a global trade and economic powerhouse is once again justified by the UN Conference on Trade and Development (UNCTAD), which put China's economic growth at the top of the range over 2020-21 in its annual trade and development report on Tuesday.

The numbers that speak volumes could well be traced to the nation's omnipresent manufacturing prowess that's being relied on to lift a multitude of people out of the shadow of COVID-19.

The much-needed consoling, as a Global Times investigation has revealed, derives from products such as made in China compression socks that appeal to those becoming increasingly addicted to home fitness in countries and regions which have been hit hardest by the pandemic. Chinese-made Halloween face masks are also found to be indispensable for especially the American people to stay festive despite an eventful year so far.

The economy's reliability as the locomotive of the world economy, as illustrated from either a macroscopic or microscopic view, suggests its contribution to global growth in 2020 could well be close to that in 2009 when over half of global growth was powered by China, economists said.

"China has obviously managed the pandemic better than other economies so far. It has a lot of domestic space to be able to manage a strong recovery," Richard Kozul-Wright, UNCTAD's director of the division on globalization and development strategies, told Xinhua in an interview on the sidelines of the report release.

"Given the size of the Chinese economy, that gives the opportunity for a fairly large recovery next year," Kozul-Wright said

The economy of the US, the world's most-battered country with nearly 7 million cumulative confirmed coronavirus cases, was projected to shrink 5.4 percent in 2020 before recovering to a 2.8 percent expansion in 2021, the UN agency forecasted.

With the US failing to prop up the global economy, China, one of the few major economies to remain on the growth track, is being more dependent than ever before, especially in the sphere of trade - global trade will shrink by an estimated one fifth this year, according to UNCTAD. 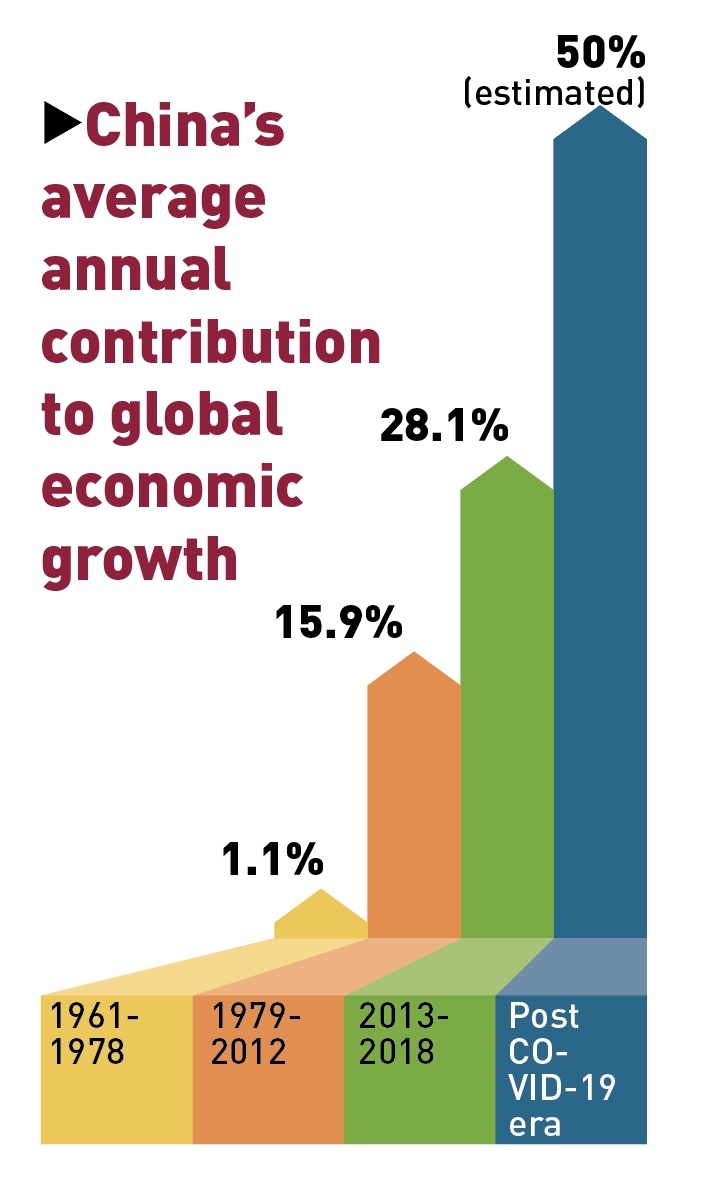 A beam of hope

China's resilience in exports attests to its conspicuous advantage in ensuring its export sector is largely intact despite flagging global demand at large, said Lian Ping, head of the Zhixin Investment Research Institute.

Other export-oriented economies that have in recent years positioned themselves as rivals to the world's factory are found to be struggling with incomplete industry categories, and production lines and supply chains that have been intensely impaired by the pandemic, Lian told the Global Times on Wednesday.

Such advantages appear to be more evident in times of crisis, underpinning China's role in reviving faltering global trade.

At the Jiaxiang Max Hosiery Co, a Chinese manufacturer of compression socks (specialized socks that increase blood circulation) based in East China's Zhejiang Province, lines of hosiery machines were rolling, and around 80 employees were busy with operating machines, sorting and packaging.

Last year, the company exported around 100 million yuan ($14.72 million) worth of compression socks, mostly to the US and Europe. So far in 2020, the company's export sales surged by around 40 percent, as a result of its unique cost advantages and a rising trend of home fitness during the pandemic.

Jin Ling, deputy general manager of the company, said that China could be the only one market overseas buyers can turn to if they want to source affordable, mass-consumer targeted compression socks, although some other countries, like Germany and Italy, are also capable of manufacturing such products.

According to Jin, the company has spent about three years upgrading traditional sock making machines into those that can produce compression socks. It is a self-developed technology exclusive to the company. She also said that the plant continues to invest a lot of money annually trying to reduce the production costs of the machines.

The company executive noted that such a manufacturing chain can't be duplicated or shifted to other emerging markets like Vietnam or Cambodia, as those countries don't get easy access to manufacturing machines or raw materials, unless imported from China again, whereas in Tongxiang, she could easily source all the materials needed from neighboring regions like Haining, where a mature fabrics industry has existed for years.

With such irreplaceability, the sock maker hasn't lost any big US clients during the pandemic, and it's even expanding its production lines, ready to export more sportswear. 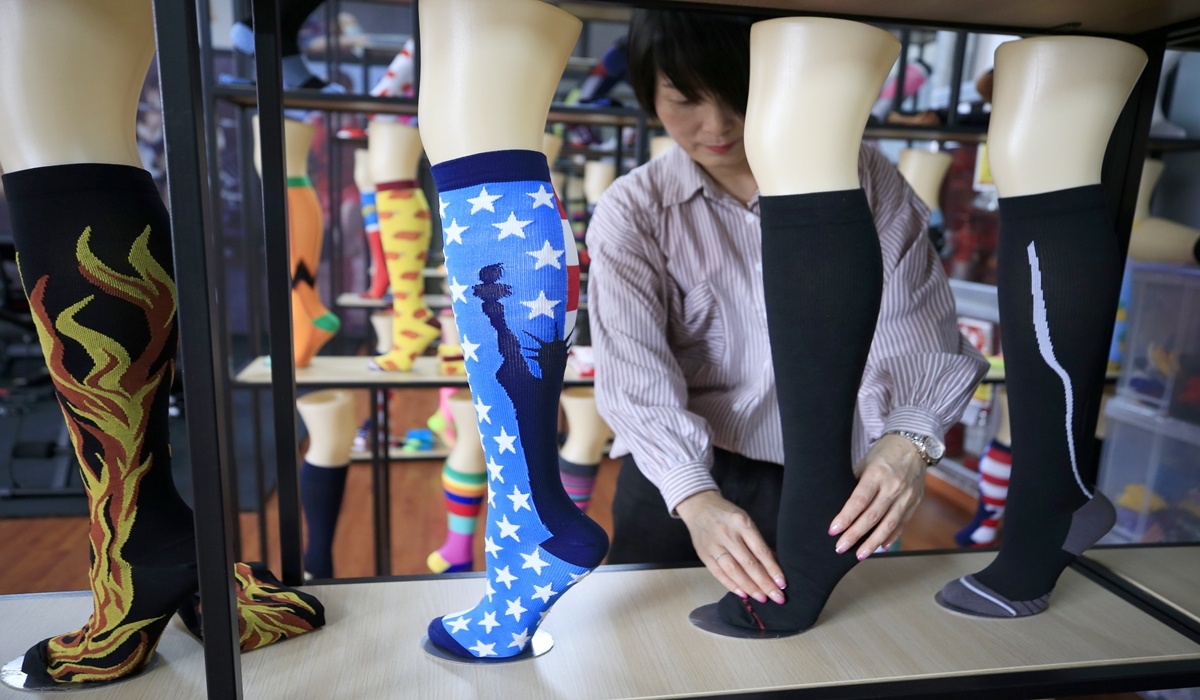 An employee sorts compression socks at a plant in Tongxiang, East China's Zhejiang. The plant exported about 100 million yuan worth of compression socks last year, most of which went to the US. (Photo: Global Times)

In another example of boosting virus-dampened sentiment, a face mask manufacturer based in Yiwu, East China's Zhejiang Province is gearing up for the upcoming Halloween season while face masks will be a critical part of the festival's ecstasy.

Ye, manager of the facemask manufacturer based in Yiwu, East China's Zhejiang Province, said that although the company's exporting volume to the US has fallen by about 40 percent this year because of shrinking demand, he is quite optimistic that sales would pick up again. The plant exports tens of thousands of face masks to the US each year for the Halloween holiday.

A glimmer of hope sneaking through the face masks, according to Ye, would be enough to make a flicker on the company's road map for the next year.

"This year, US clients don't purchase as many as they did last year as festival activities will be restricted by pandemic control requirements. However, this is going to be just temporary. We still have the clients, and when pandemic is gone next year, they will start to purchase again as normal," he told the Global Times on Wednesday.

Also worth noting is Chinese manufacturers' digital savviness - they are much more sophisticated in digitizing trade than their overseas counterparts - rendering them least affected by the pandemic.

In the case of the sock company that Jin works for, a majority of its products are shipped to overseas vendors via e-commerce platforms like Alibaba, which can make the best of the virus-proof internet to reach out to customers forced to stay at home. Thanks to the company's appealing socks, some of its US clients can resell the socks online for as much as 10 times their original import costs, Jin disclosed.

China's exports are set to be increasingly changing for the better, based on the estimates by the two manufacturers in one of the nation's exporting hubs.

Over the past few months, the nation's exports have already continued to surprise the market with positive growth.

China has proven to be a much stronger global trade and economic powerhouse during times of crisis, a tradition that economists believe will continue during the pandemic.

IMF statistics showed that between 2009 and 2018, China's contribution to the global GDP increase hit 34 percent by market exchange rates or 27.7 percent by purchasing power parity.