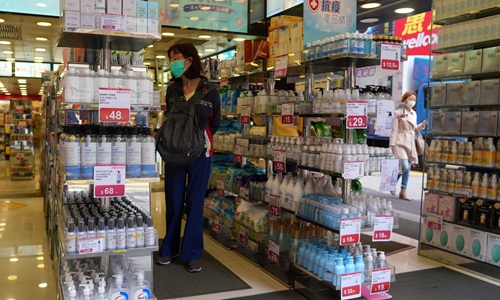 A customer shops at a store in Hong Kong on Friday amid the COVID-19 outbreak, where the shelves are lined with disinfectant wipes and hand sanitizers. The shortage of such products has continued for nearly a month before they were restocked. (Photo: Global Times)

Illegal public gatherings are staging a comeback in Hong Kong, while experts warned that a resurgence of unrest would further damage the city's economy and social order, which had been showing signs of recovery after the double blow of month of riots followed by the COVID-19 pandemic.

As night fell, protesters moved and gathered on streets in Mong Kok, where some of them lit fires on the street and threw objects at the police, according to media reports.

Hong Kong police on Monday said they had issued penalty tickets to 19 people for violating the regulation that bans illegal group gatherings. Some 230 people between the ages of 12 and 65 were arrested for offenses including unlawful assembly, possession of offensive weapons or dangerous drugs, disorder in public places, and assaulting police officers.

Protests at this moment aim to disturb China's pace in resuming production and shaking off the impact of the COVID-19, Li Xiaobing, an expert on Hong Kong studies at Nankai University in Tianjin, told the Global Times on Monday, noting that the gatherings must be the result of collusion of exterior and interior forces.

They are also a warm-up for the 2020 Hong Kong Legislative Council election scheduled in September. The protesters' aim is to enter the committee that elects the chief executive, according to Li.

Experts warned that a new wave of protests would destroy the hard-earned momentum of economic recovery in the city, which sustained a dual blow from months of riots in the second half of 2019 and the COVID-19 pandemic.

"While the epidemic situation is improving, social issues are seemingly staging a comeback, which would hurdle Hong Kong's recovery," the city's Finance Secretary Paul Chan Mo-po said in a signed article released on Sunday. Chan noted that the Hong Kong economy is facing unprecedented pressure.

Wang Dan, a Beijing-based senior China analyst at the Economist Intelligence Unit, told the Global Times on Monday that new protests may spread the virus and will hit consumption, which had just seen signs of revival.

Slack consumption and investment are caused by the pandemic as well as worries about Hong Kong's social order and its future, Wang said.

"Until Hong Kong's social order returns to normal, investors will diversify their investment destinations to places such as Singapore and Malaysia. Tourists, mainly from the Chinese mainland, will also choose other places, and retail, catering and hotels will take a hit," Wang said.

According to Wang, Hong Kong's exports are being hit mainly by sluggish Western economies and logistics problems caused by the epidemic. As the situation around the world may ease in the second half of the year, exports are expected to resume.

Hong Kong government announced Monday to provide HK$5.4 billion ($696.7 million) to support Hong Kong Ocean Park reeling under financial difficulties, as the park requested assistance in January. The park will face bankruptcy if it is not granted funding by June, reports said.

Chan said that Hong Kong's economy would revive in the third quarter as long as effective anti-epidemic measures guarantee the recovery of economic activities. Relief policies, after being approved by the Legislative Council, would also help to stabilize the economy. These policies include allocating HK$10,000 ($1,290) to each qualified Hong Kong resident and other stabilizing measures worth a total of HK$290 billion.

Tu Hai-ming, a Hong Kong member of the National Committee of the Chinese People's Political Consultative Conference (CPPCC) and chairman of the Hong Kong New Era Development Thinktank Ltd., suggested that the post-epidemic focus of the Hong Kong government should be on the Lantau Tomorrow Vision, which aims to offer affordable housing for Hong Kong people. That plan has remained on paper since being raised in 2018 due to the months of riots.

Tu said government investment should also go to public services such as smart city development and green buildings in the urban areas of Hong Kong.

"Such work can boost economic growth and provide jobs, and also ease the difficulties in people's livelihoods," Tu said.