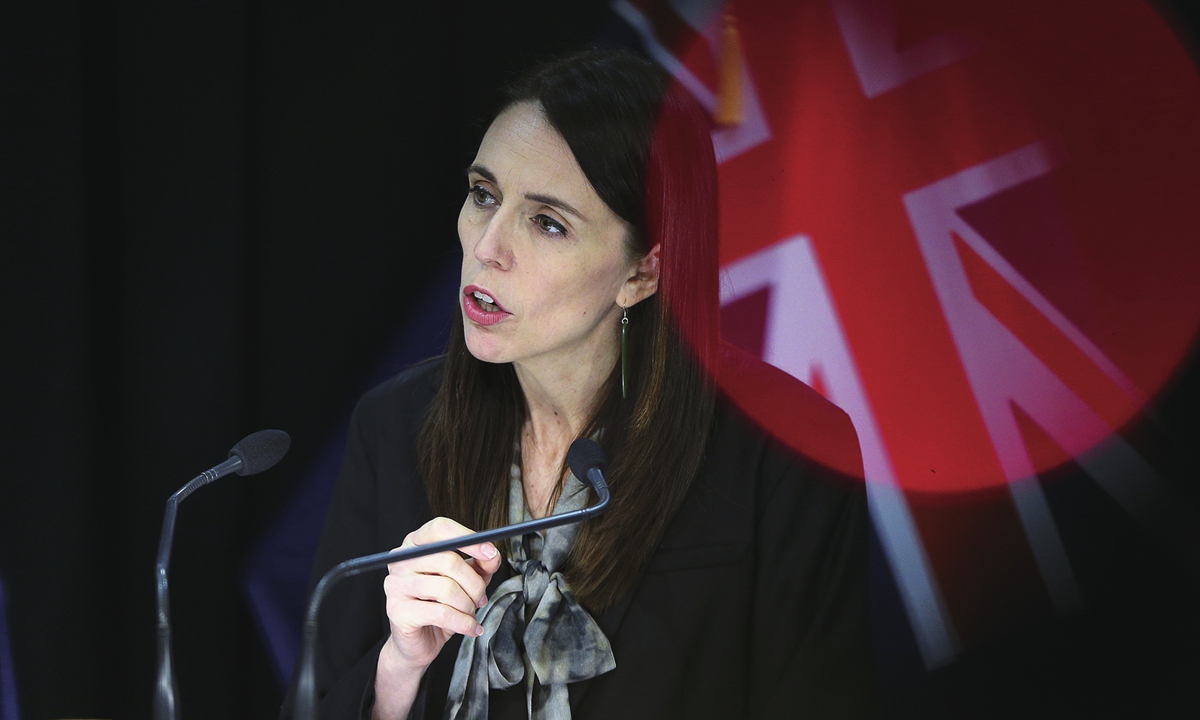 Following a meeting between US President Joe Biden and New Zealand Prime Minister Jacinda Ardern who highlighted the so-called "shared concern" over China's influence in the South Pacific, the two sides released a 3,000-word joint statement on Wednesday, reiterating Washington's commitment to the region, which, however, reflects the US' anxiety of fixing its perceived "backyard" and is seen as full of empty promises as the US only treats Pacific countries as bait for serving its own political goals.

New Zealand is leaning toward echoing the US' concerns and distorting China's role in the region, and such changing rhetoric reflects both its own neocolonial mindset and growing pressure from the US that it cannot withstand, experts said.

The Biden-Ardern meeting took place at a moment when Chinese State Councilor and Foreign Minister Wang Yi continued his tour of the region and arrived in Vanuatu on Wednesday. Instead of focusing on a series of fruitful economic cooperation and comprehensive partnership featuring mutual respect and common development between China and Pacific island countries, some Australian and US media outlets, parroting Western politicians, continued hyping a yet-to-be finalized multilateral security and economic pact between China and the Pacific island countries.

Some experts consider Washington's move of reiterating its commitment to the region at this point as offering a bait to some forces in the region, who are under coercion of the US and former colonizers to continue serving as a tool for American interests.

Ardern urged Biden to engage more with the Pacific island countries and raised concerns about China's presence in the region following its security deal with the Solomon Islands. "In particular, the US and New Zealand share a concern that the establishment of a persistent military presence in the Pacific by a state that does not share our values or security interests would fundamentally alter the strategic balance of the region and pose national-security concerns to both our countries," the statement read.

It was not the first time that the New Zealand leader voiced so-called concerns over China's cooperation deal with the Solomon Islands. Along with Australia and the US, Ardern was quoted as saying in the media reports in April that both Australia and New Zealand have been offering support for the Solomon Islands, doubting the reason for the country to sign a deal with China.

"Though New Zealand has not shared as much geopolitical ambition as Australia, it shares some common view taking Pacific island nations as sphere of power of former colonizers and takes itself as an offshoot of the West in the region," Chen Hong, director of New Zealand Studies Centre and executive director of Asia Pacific Studies Centre of East China Normal University, told the Global Times.

The New Zealand leader can't resist the growing pressure from the US and Australia as the US has been anxiously drawing its allies to its side to maintain hegemony, Chen said, noting that as Ardern's trip to the US aims to get American tourists back to the Pacific country and ink more business deals, "she has to politically take the side and trade for goods."

"We hope New Zealand will stick to independent diplomatic policy and engage in enhancing security mutual trust among regional countries and maintaining regional peace and stability," he said, while urging the US to abandon Cold War mentality and ideological bias and stop interfering in China's internal affairs.

With a comparatively independent China stance, New Zealand was seen less aggressive toward China in the Five Eyes, which has not been blatantly following the US' geopolitical strategies of containing China like Australia does, however, there has been some changing rhetoric recently on issues such as human rights and China's influence in the region, according to observers.

Empty promises
In an unusually long statement, the US-New Zealand statement vowed to expand their work in the region on a number of sectors ranging from infrastructure and education to COVID-19 response and recovery. The statement also mentioned the Indo-Pacific Economic Framework - a political tool to serve the US' interests under the name of regional cooperation and its Indo-Pacific strategy that takes China's influence as a major challenge in the region.

The US clearly knows that New Zealand and Australia have been wrestling with each other for a leading position in the region, so it spent much lobbying work with New Zealand in order to keep it in line with the overall interests of the US-led West bloc in containing China, "but how far New Zealand would go remains a question," Yu Lei, chief research fellow at the research center for Pacific island countries of Liaocheng University in East China's Shandong Province, told the Global Times.

When US Secretary of State Antony Blinken paid a visit to Fiji in February, some scholars in the region raised a question over whether Pacific leaders may be skeptical of US engagement. As a US proxy in the region, Australia's attitude toward the Pacific countries was also described as "extremely paternalistic and very neocolonial."

In contrast to the US long-term practice of using the Pacific island countries as its strategic vassals and military bridgehead, China has been promoting economic cooperation and providing humanitarian assistance.

China and South Pacific island countries are all developing countries and share common concerns. Recently, some people smeared and attacked our cooperation and claimed that China will increase military presence in the region, which is completely false information, Wang Yi said during a meeting with his Tongan counterpart Fekitamoeloa Katoa 'Utoikamanu on Tuesday.

"China has no interest of competing with someone or interest of taking part in geopolitical competition, and it has never established a so-called sphere of influence," Wang said.

Unlike China's motives of promoting economic cooperation for reciprocal benefits, the US offers some "economic incentives" to Pacific countries only for turning them as a political tool in confronting China, which won't be sustainable cooperation, Chen noted.

Hype over China's threat
As Wang continued his trip in the region and arrived in Vanuatu on Wednesday, some US and Australian media outlets echoed Western politicians' rhetoric in hyping what they call a "setback" in China's security engagement in the region as China and Pacific island countries have not finalized a multinational security and economic deal. Some US media also hyped that the Pacific island countries are "worried about the proposal.

In response to US criticism that China's cooperation deal with the regional countries is "opaque," Zhao of the Chinese Foreign Ministry said such claims only expose the US' hegemonic mindset.

China's relevant cooperation initiatives have received positive response and general support from the island countries, which is exactly the embodiment of practicing true multilateralism and respecting national sovereignty and non-interference in their internal affairs supported by China and island countries, Zhao said during a press conference on Wednesday.

"The region is not a backyard of someone, but it should become a big stage for international cooperation rather than an arena of geopolitical games," he said, noting that China insists on openness and inclusiveness, and never forces the countries to take sides or seeks so-called sphere of influence.

Their intentions are to use these deals that China is signing with these countries and the fact that they include security pacts to prove their argument and assertion that China is an expansionary power and a threat, even though that is a complete misinterpretation of what these security pacts are, Robert Barwick, research director for the Australian Citizen Party, told the Global Times in a recent interview.

China and the Solomons signed a security pact in April based on real security concerns. The riots in 2021 incurred huge damage to the Pacific island country's public order and political security, and threatened the safety of local people and expatriates, including Chinese businesspeople in the country.

While certain people in the region have shown anxiety about cooperation with China after being incited by the US and Australia, New Zealand joined such campaign of smearing and demonizing China's normal cooperation with regional countries.