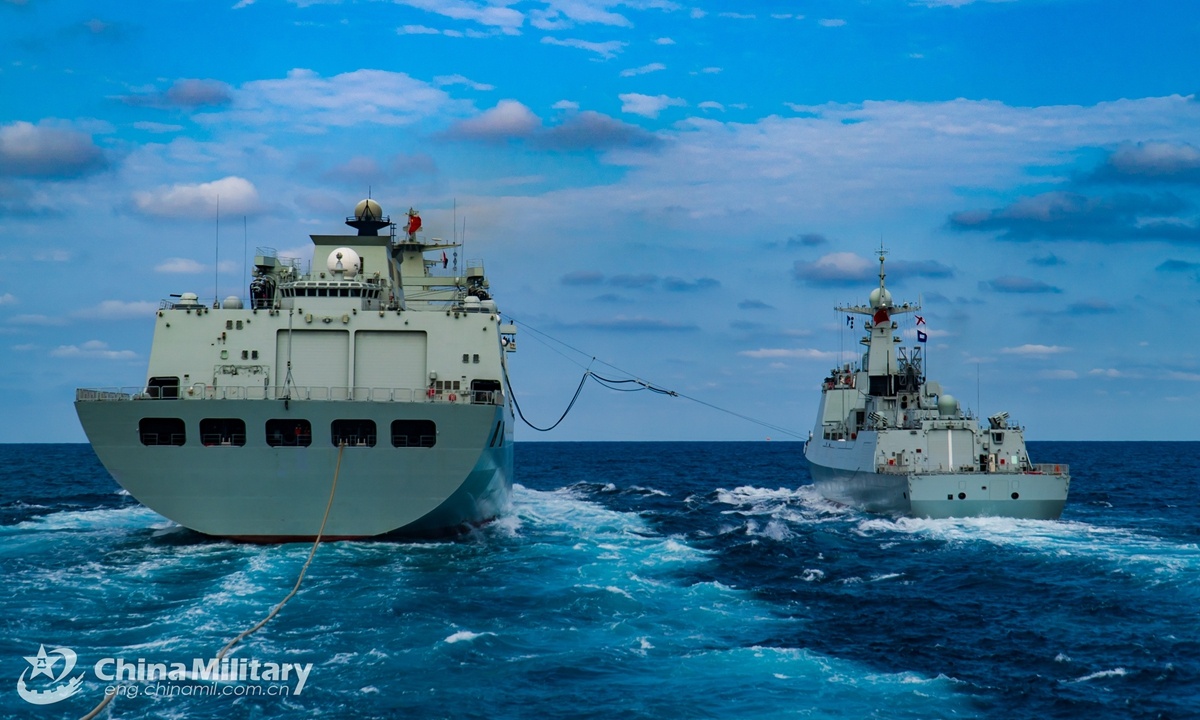 Warships attached to a destroyer flotilla with the navy under the PLA Southern Theater Command execute underway replenishment-at-sea during a four-day-long realistic-combat training exercise in waters of the South China Sea recently. (Photo:China Military)

Another Type 052D guided missile destroyer, the Nanning, has entered service with the Chinese People's Liberation Army (PLA) Navy this year, as it recently made its first public debut in an exercise in the South China Sea, a report shows.

Warships attached to a destroyer flotilla with the Navy under the PLA Southern Theater Command recently held a four-day-long realistic-combat training exercise in the waters in the South China Sea, practicing maneuvers including replenishment-at-sea, eng.chinamil.com.cn, an English-language website of the PLA, reported on Sunday.

In addition to the Type 901 comprehensive supply ship Chaganhu (Hull 967) and Type 071 amphibious dock landing ship Qilianshan (Hull 985), the Type 052D guided missile destroyer Nanning (Hull 162) was also a part of the exercise, a photo released with the report shows.

This is the first time the Nanning has been seen featured in an exercise in an official report, indicating that the warship has been commissioned into the PLA Southern Theater Command Navy, observers said.

Judging from the photo, the Nanning is an upgraded variation of the Type 052D with an extended helicopter flight deck and a new anti-stealth radar. China has built three consignments of Type 052D destroyers. While the first two are only slightly different in appearance, the ships from the third lot have this upgraded variation, media reports said previously.

Taking part in the exercise indicates that the Nanning is gaining combat capabilities at a rapid speed, a Chinese military expert who requested anonymity told the Global Times on Monday.

The Nanning appears to be the third Type 052D that has entered PLA naval service in 2021, following the Suzhou and the Huainan, according to media reports.

The PLA Navy has also commissioned its second and third Type 055 large destroyers in 2021, namely the Lhasa and the Dalian.

Back in August 2020, China launched its 25th Type 052D destroyer and eighth Type 055 large destroyer, media reported. The report said many are still being equipped or are in the sea trial phase and not commissioned yet.

According to the construction pattern of vessels, outfitting work after launch usually takes one to two years, meaning the PLA Navy could still commission more Type 052D and Type 055 destroyers this year, observers said.