Two Type 052D destroyers that entered Chinese People's Liberation Army (PLA) naval service only a few months ago are gaining combat capabilities at a very fast pace, as they were brought to the fore in a recent round of highly intensive exercises that put the ship's hardware and personnel to the test. 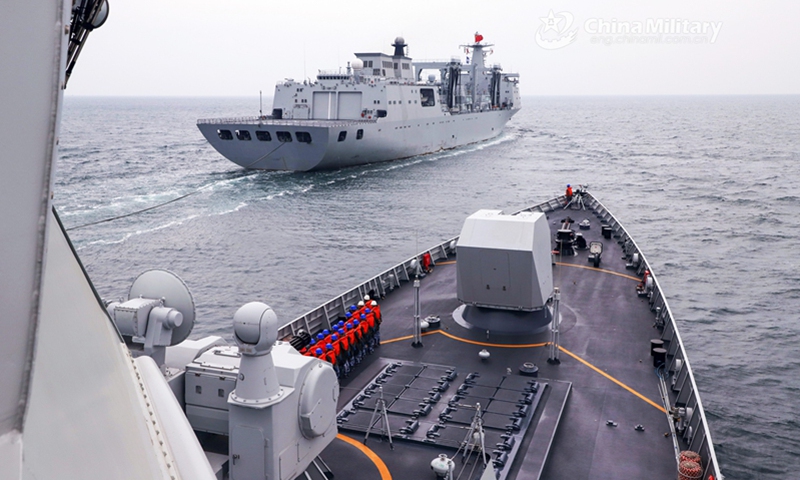 Sailors man the rails on the forecastle of the guided-missile destroyer Qiqihar (Hull 121) as the vessel steams in astern formation with a comprehensive supply ship prior to a replenishment-at-sea operation during a 7-day round-the-clock exercise centered on maritime offensive and defensive training. (Photo: eng.chinamil.com.cn)

A warship training center attached to the PLA Northern Theater Command Navy recently organized round-the-clock, highly intensive exercises in the Yellow Sea featuring two Type 052D destroyers, the Tangshan and the Qiqihar, and two Type 056A corvettes, the Dingzhou and the Mudanjiang, China Central Television (CCTV) reported on Friday, noting that all of the ships were recently commissioned.

During the exercises, which aim to test the ship commanders' capability to deal with emergencies, the warships conducted more than a dozen types of training including main gun shooting at land targets, sailing through a cold front, simulated missile attack, outbreak of fire on board and joint search and rescue, CCTV reported.

The Global Times reporter found that the Tangshan made its debut to the general public in a report by js7tv.cn, a video news website affiliated with the PLA, in late September, while the Qiqihar was first seen in a video posted by the PLA North China Sea Fleet in early October.

It is very fast for warships to commence such intensive exercises just a few months after being commissioned, analysts said.

The PLA Navy has been continuously commissioning new warships, so it is making innovations in training and using experienced personnel in helping new crews get used to the ships, Wei Dongxu, a Beijing-based military expert, told the Global Times on Sunday.

With new hardware entering service at a rapid pace, the PLA Navy is also recruiting and developing more outstanding talent, Wei said. "Once a new piece of equipment is commissioned, the troops will make it combat-capable very fast."

Chinese military observers also noted that, unlike the Qiqihar, the Tangshan is not an original Type 052D, but the latest enhanced variant dubbed the "Type 052DL" with an extended helicopter landing deck that can better host larger choppers including the naval version of the Z-20 helicopter, which is expected to have utility and anti-submarine warfare variants, Shanghai-based news website eastday.com reported on Saturday.

The Tangshan also comes with a new long-range early warning radar that can detect stealth aircraft like the F-35 and F-22, the eastday.com report said.

More warships, including Type 052D destroyers, Type 055 large destroyers and Type 075 amphibious assault ships, have been launched and are expected to enter PLA naval services in the not distant future, observers said.