After the US signed the new Taiwan Travel Act, China urged the US to abide by the one-China policy. Chinese mainlanders, meanwhile, are calling to unify Taiwan by force. Analysts say such strong voices reflect the Chinese mainland's changing views.If the US were to make any moves, China would respond with counter moves that could deeply impact the West. 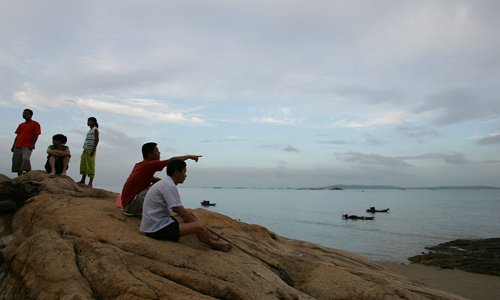 Mainlanders point to the Kinmen Islands from a beach in Xiamen, Fujian Province.(Photo: CFP)

Following US president Donald Trump's signing of the "Taiwan Travel Act" last Friday, Alex Wong, deputy assistant secretary at the Bureau of East Asian and Pacific Affairs from the US Department of State, arrived in Taipei Tuesday night for a three-day visit. Chinese leaders have been issuing strong responses by declaring China's stance on the matter. These events have also stirred up calls from the public to unify Taiwan by force, a sentiment that has been increasing in recent years, which reaches a peak every time conflicts happen across the Straits. "If relations between the US and China's Taiwan are to be upgraded in the future, I think there will be more voices from Chinese mainland on unifying by force," noted Zhou Zhihuai, director of the academic board of the Taiwan and East Asia Research Center of Central China Normal University.In Chinese President Xi Jinping's speech at the closing ceremony of the 13th National People's Congress on Tuesday, he vowed to safeguard China's territorial integrity, saying that any actions or tricks to split China are "doomed to fail."The Chinese foreign ministry on Wednesday also denounced the Taiwan Travel Act. Foreign Ministry spokesperson Hua Chunying said China has lodged a stern representation to the US regarding US officials' visit to Taiwan. She said China urges the US to abide by the one-China policy and the three joint communiqués, to stop any form of official interaction with Taiwan to prevent any serious damage to Sino-US relations and cross-Straits peace and stability. 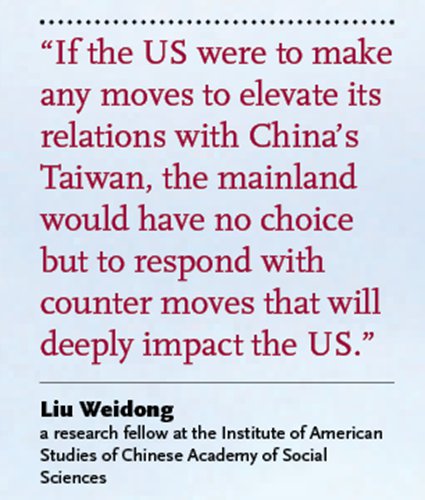 Among the public, there has been another round of calling for unifying Taiwan by force on forums and social media. One article on WeChat analyzed that "unification by force is on the way." The article went on to suggest that mainlanders should prepare to seize this chance and "show the Taiwanese compatriots what glory it is to be part of the great nation." "China and the US are having frictions in trade. The US has the act and sent its official to China's Taiwan. It all seems like the US is actively causing conflicts and China is being passive. On a larger scale, surrounding countries such as India and countries in the South China Sea are challenging China, we need to step up and be more active," one netizen wrote on Weibo, commenting on recent events.Others suggested that signing the act is an opportunity for China to start the unification process. On military-themed forums, there has been a resurfacing of posts that analyze Chinese mainland's military prowess and comparison against Taiwan and the US. For many years, Chinese academia and the public alike have debated unifying by force as opposed to a peaceful process. Supporters of force argue that the number of "independence" supporters is increasing linearly and more secessionists will rise under the current Taiwanese education. Supporters for a peaceful process mostly argue that war brings heavy casualties for both sides and it would be difficult to rebuild Taiwanese people's faith afterward.However, in recent years, there has been a gradual increase of supporters for force in the public. Angry calls for unification by force soared to a climax in 2016, when Tsai Ing-wen took office in Taiwan and refused to acknowledge the 1992 Consensus, which emphasizes the one-China principle, along with reports of concerns expressed by those inside Taiwan. There are also discussions in the media whether there should be a "unification schedule," setting a definite timeline on related matters. Zhou has advocated such a schedule on multiple occasions. A poll conducted by huanqiu.com in 2016 suggests that 85 percent of respondents are in favor of recovering Taiwan by force, which they believe should be ideally carried out within five years. Such a shift in public attitude is the result of a variety of reasons, the most obvious being a corresponding shift in Taiwanese public's attitude. According to the South China Morning Post, a poll taken last year revealed that three-quarters of people in Taiwan think that the island and the mainland are two separate countries, with only 14 percent believing that they belong to one nation. Zhou told the Global Times that it is understandable that the public has become more inclined to unify Taiwan by force. The Taiwan Travel Act shows that the nature of relations between the US and Taiwan has changed; that it is no longer non-official, which has been hard on the Chinese public. He thinks such interactions encourage the secessionist forces inside Taiwan, which continue to grow. Furthermore, the mainlanders' call for unification by force shows that in recent years the public has gained more confidence in the country's power both militarily and economically. Taiwan was once admired for its economic and political achievements of the past, but over the past decade the island seems to have lost its appeal among mainlanders. Indeed, on Chinese mainland social media there are often jokes about how some Taiwanese media view the mainland. A couple of years ago, a talk show that went viral showed a Taiwanese host saying that mainlanders are so poor they can't even enjoy tea-leaf boiled eggs. 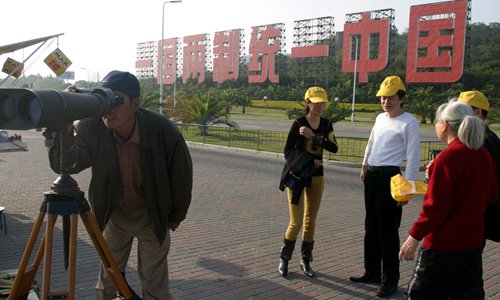 Mainland tourists observe Taiwan through a telescope in Xiamen.(Photo: CFP)

At the same time, voices from Taiwan are concerned about the mainland's reaction to the act, with some concerned about the prospect of unification by force. An editorial published this week in the Taiwan-based China Times expressed that the mainland "might take a hardline response towards the Taiwan Travel Act. Taiwan shouldn't be overly excited and needs to cautiously solve and balance relations and call for Washington to communicate with Beijing." Analysts also told media that Taiwan is being used as a "chessboard piece" by the US, and that if cross-Straits military conflicts do break out, there's no guarantee of security for Taiwan. On the issue of unification, the Chinese government's attitude has always been to try the best for a peaceful process while remaining determined to not let the island separate from China. Zhou said a peaceful unification is not entirely up to China. If the US keeps meddling in Taiwan affairs and if something happens that in fact violates article 8 of the 2005 Anti-Secession Law, then China will have to fight. Development of such matters depends on the close interactions between Chinese mainland, US and Taiwan.Article 8 of this law states that in the event that the "Taiwan independence" secessionist forces should act under any name or by any means to cause the fact of the island's secession from China, or that major incidents entailing the island's secession from China should occur, or that possibilities for a peaceful reunification should be completely exhausted, the state shall employ non-peaceful means and other necessary measures to protect China's sovereignty and territorial integrity.However, taking Taiwan's public opinion and international pressure into consideration, a military takeover of the island is not an ideal choice for the central government and academia, Jin Canrong, associate dean of the School of International Studies at Renmin University of China, wrote in an opinion piece in 2016. The international community may impose sanctions on the Chinese mainland if the latter retakes Taiwan by force, and the island may also be perplexed by politically chaotic situations in the first few years. This is the cost that the mainland has to pay for a forced reunification.Morality is another significant factor the central government has to take into account. Military actions will upset the compatriots in Taiwan, and this is not what the mainland wants.Meanwhile, China can also take other measures to counteract the issue. "For example, if the US were to make any moves to elevate its relations with China's Taiwan, the mainland would have no choice but to respond with counter moves that will deeply impact the US," Liu Weidong, a research fellow at the Institute of American Studies of Chinese Academy of Social Sciences, told the Global Times.He believes Beijing will likely stop sending high-ranking officials to Washington and refuse any official exchanges with Washington for a period of time.If any "Taiwan independence" secessionist forces perceive the US bill as a pro-independence signal, the Chinese army will resume its military probes circling the island and send more military vessels and airplanes to patrol the Straits, Liu said.