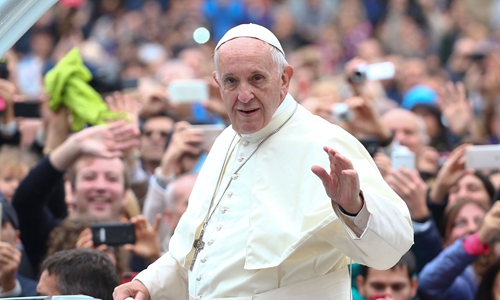 Pope Francis has love and confidence in China and China trusts Pope Francis, said a Vatican bishop during a conference held in China, noting that the next step for the two countries is to establish diplomatic relations, which is at the center of the Pope's heart.

"In this dynamic, the next step is to reach [an agreement on establishing] diplomatic relations," and especially the visit of Pope Francis to China and China's leaders to visit the Pope as friends when the time is right.

The bishop said that this is at the center of the heart of Pope Francis.

China appreciates the goodwill gesture by Pope Francis and is open to exchanges with the Vatican, said Geng Shuang, spokesman for China's Foreign Ministry on November 28, in response to Pope Francis reportedly expressing his wish to visit Beijing.

China is sincere and positive in advancing China-Vatican relationship and welcomes more exchanges with the Vatican, Geng added.

During his return journey from Japan to the Vatican in late November, Pope Francis reportedly said that he wants to visit Beijing and that he loves China.

China and the Vatican in September 2018 signed a landmark deal on the appointment of bishops, a thorny issue that had caused decades of tension between the two sides. China ordained its first bishop in August since signing the deal, a move hailed by the Catholic community and scholars as helpful to appointing more bishops amid a shortage.