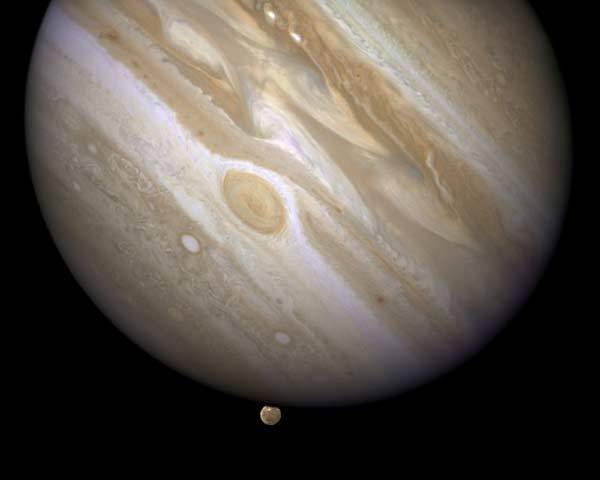 The planet Jupiter is shown with one of its moons, Ganymede (bottom), in this NASA handout taken April 9, 2007 and obtained by Reuters March 12, 2015. (Photo: Agencies)

Barely a month after China landed its first rover on Mars, the country's scientists already have plans to explore Jupiter, the largest planet in our Solar System.

Zhang Rongqiao, an official at the China National Space Administration and chief planner of the Tianwen 1 Mars mission, told reporters at a news conference at his administration's Beijing headquarters on Saturday that China will not be content with the success of its first Mars expedition, but will continue its interplanetary adventures.

"A major highlight of our future plans for interplanetary exploration is a Jupiter mission. Humankind still lacks comprehensive knowledge of the Jovian system, and has conducted only a handful of operations there," he said. "Therefore the gas giant is full of opportunity for science and discovery."

In addition to its scientific value, an expedition to Jupiter will lead to the development of new inventions and technologies, Zhang added.

"Such a mission will require us to develop new technologies for longer-lived spacecraft, better tracking and controlling and improved energy sources," he explained. "In sum, it will push forward our space exploration capabilities considerably."

Zhang did not provide detailed information on the planned mission, its schedule or method of exploration.

Although Jupiter has been known since ancient times, the first detailed observations were made by Galileo Galilei in 1610, using a small telescope.

The first spacecraft to visit Jupiter was the United States' Pioneer 10, back in 1973. Since then, the planet has been visited by several passing probes and orbiters.

The most recent Jovian mission was launched by NASA in August 2011. The spacecraft, named Juno, began to travel in a polar orbit of the gas giant in July 2016, and has been conducting an investigation of Jupiter's atmosphere, deeper structure and magnetosphere for clues to the planet's origin and evolution.