CHINA NGOs get financial support from US govt, smear China

NGOs get financial support from US govt, smear China 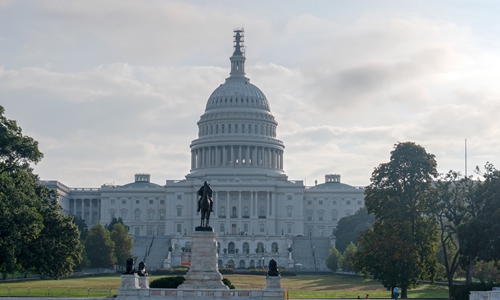 These NGOs fabricate stories on Xinjiang, Tibet, Taiwan and Hong Kong under the guise of protecting "human rights"

Some US-based nongovernmental organizations (NGOs) have played a disgraceful role in pushing for regime change, bringing global turmoil and cooperating with the US government and other anti-China forces to contain China, Chinese experts said.

China announced sanctions on a batch of US NGOs on Monday in response to the "Hong Kong Human Rights and Democracy Act."

Some observers said more sanctions may be introduced after the passage of the "Uyghur Human Rights Policy Act" on Tuesday.

Under the guise of protecting "human rights" and "democracy," some US NGOs supported by US politicians and US intelligence agencies ignore China's development and fabricate stories about China's Xinjiang Uyghur Autonomous Region, Tibet Autonomous Region and Taiwan, according to experts. They noted that NGOs often release reports smearing China.

These NGOs flaunt neutrality despite always having been manipulated by the US government to promote US hegemony, experts said.

The Global Times found that these NGOs are explicitly supported by the US government and work to safeguard the interests of the US elite.

For example, the NED was founded in 1983 and claimed to be a private nonprofit fund dedicated to the growth and strengthening of democratic institutions around the world. It offers more than 1,600 grants each year to support the projects of nongovernmental groups abroad that are working for so-called democratic goals in more than 90 countries and regions. The money largely comes from the US Congress.

Allen Weinstein, a co-founder of the NED, told The Washington Post in 1991 that "a lot of what we do today was done covertly 25 years ago by the CIA."

IRI claims to be a nonprofit, nonpartisan organization but it accepts money from the US State Department and US Agency for International Development (USAID). USAID is a federal government organ that has advanced US foreign policies such as promoting free markets since the 1980s. It claims a record of "helping" countries establish democracies since the 1990s.

Freedom House also calls itself an independent organization dedicated to the expansion of "freedom" and "democracy" around the world.

However, 80 percent of its funds are from the US government and it works for US authorities, according to an article published in 2005 on a journal affiliated to China Institutes of Contemporary International Relations.

Founded in 1941 to oppose communism in Europe, the Washington-based organization works as a think tank for the US Department of Defense and is closely linked to the Busch family.

"These NGOs would not bite the hands that feed them, which means they are working on imposing US rules and ideology on other countries and regions. They want to mold others to fit the needs of the US and to serve US interests," Li Haidong, a professor at the China Foreign Affairs University's Institute of International Relations, told the Global Times.

"With prejudice and superiority, these NGOs usually take the moral high ground and interfere in other countries' affairs. Many of their reports, especially those on human rights, are biased and not objective. They also impose US-style democracy globally without considering local conditions, which usually brings destruction in many parts of the world," Li said.

In a 2018 article, US journalist Max Brumenthal called NED a US-funded "meddling machine" that interferes in elections around the globe.

The NED has also backed coups against independent governments.

The NED, IRI and NDI claim to directly support groups working for human rights, independent media, the rule of law, and a wide range of civil society initiatives.

NED also claims to cultivate partner organizations in other countries and regions, citing their work with Polish NGOs to advance democratic civic education throughout Central Europe and in parts of the former Soviet Union.

According to its website, NED was behind the transformation of East Europe in the 1980s and 1990s.

It was also involved in the "color revolutions" and long-term unrest in Ukraine and Georgia.

In recent years, Freedom House's main activities have been in countries destabilized by Western intervention including Serbia, Ukraine and others in the Middle East.

It backs internal regime change by instigating young intellectuals, according to a report by German news magazine Der Spiegel in June 2008.

Every year since 1972, Freedom House has released a report assessing political rights and civil liberties around the world. Their biased assessment ranks countries as "Free," "Partly Free" and "Not Free."

Human Rights Watch was originally called Helsinki Watch. It was created in 1978 during the Cold War to scrutinize and criticize "the crimes" that were being committed by the former Soviet Union and its allies. That Cold War ideology has long played a role in the kinds of priorities and advocacy that the institute engages in.

A report by a Switzerland-based website us-politik.ch points out that most of NGOs in the US are actually "GoNGOs," which means these NGOs are organized by the US government. Freedom House and NED are listed as "GoNGOs."

"GoNGOs" are funded by the US government, so they work at the will of the US and help publicly defend US intervention, according to the report.

Since smearing China has become "politically correct" in the US, US NGOs now work with media, think tanks and US politicians to hype sensitive topics, especially those on China's Xinjiang, Tibet and Taiwan. They have tried hard to make trouble for China and to contain China, analysts said.

Giving financial support to secessionist groups in Chinese territories is one way US NGOs meddle in China's affairs. NED granted $670,000 in 2018 for projects related to Xinjiang, a region it referred to as "East Turkestan," a term used by secessionist forces. More than half of the money went to the World Uyghur Congress, an infamous separatist organization.

In 2018, NED offered $4.75 million in support of so-called human rights activists in the Chinese mainland.

NED has sponsored publications and radio broadcasts by secessionist Tibetans in exile, helping them to record so-called human rights violations and cultivate a new generation of secessionists. It gave about $630,000 to such programs in 2018 alone.

According to Hong Kong news outlet wenweipo.com, NED increased its investment in Hong Kong after the "Occupy Central Movement" in 2014. It spent some $1.3 million to sponsor Hong Kong-based groups from 1990 to 2018. Between 2015 and 2018, an average of $450,000 was spent on the city to instigate sabotage.

According to NED's own data, it spent more than $1.16 million to Hong Kong from 2016 to 2018. A majority of the sponsorship went to Solidarity Center (SC) and National Democratic Institute for International Affairs (NDI), which NED referred to as core grantees.

Jimmy Lai Chee-ying has been sponsoring opposition organizations and lawmakers via his media group Next Digital Ltd, which is running a deficit. His company is another subsidiary of NED.

Drawing dissidents over to their side, maintaining close relations with infamous separatists and separatist groups, and releasing so-called neutral reports to cooperate with media to smear China are methods adopted by these NGOs, experts said.

In 2019, NED conferred its Democracy Award on three organizations including The World Uyghur Congress and Tibet Action Institute, an organization of secessionist Tibetans in exile. Since 1991, NED has given many awards to dissidents.

An expert on human rights who asked for anonymity told the Global Times that Human Rights Watch often releases reports accusing China and other developing countries of human rights violations but seldom notes severe human rights situations in the US.

"Their reports are never neutral and are always made for political reasons. Their Xinjiang reports, for example, are not fact-checked and accused China of oppressing 13 million Uyghurs in Xinjiang," said the expert, noting that Sophie Richardson, China director of Human Rights Watch, often re-tweeted fake news or rumors about Xinjiang on her Twitter account.

Human Rights Watch has always been enthusiastic about criticizing other countries and regions and pays close attention to topics on juridical fairness, racial discrimination, extortion, and confession by torture.

However, the organization ignores cases of police beating African-Americans to death in the US or the infamous abuse of detainees in the Guantanamo Bay detention camp.

Kenneth Roth is the executive director of Human Rights Watch and has been regarded as a hard-core member of the organization. In the end of 2009, 118 scholars publicly criticized Human Rights Watch's report and Roth's remarks on Venezuela for being full of hypocrisy and misinformation.

A letter jointly released in May 2014 by more than 130 scholars calling on Human Rights Watch to close their revolving door to the US government noted that many members of the Human Rights Watch are former CIA agents and former US officials. The organization's standard on human rights is in accordance with the US diplomatic policies and interests, thus damaging its credibility and independence.

The US and some Western countries have used human rights as a tool to implement their foreign policy and adopt double standards when accessing human rights situations, keeping "neutral" when a country closely follows the US and fiercely accusing a country when it goes against the US, said Qian Jinyu, executive dean of the Human Rights Institution of Northwest University of Political Science and Law in Shaanxi Province.

US NGOs including the Human Rights Watch always deliberately ignore China's developments on human rights protection and hype some problems to cater to the stereotypes and prejudice of some people in the West, Qian told the Global Times.

He noted that China's sanctions on these US NGOs may make them more transparent in dealing with China.

But driven by political interests, some may interfere with China's affairs more frequently to earn more support.