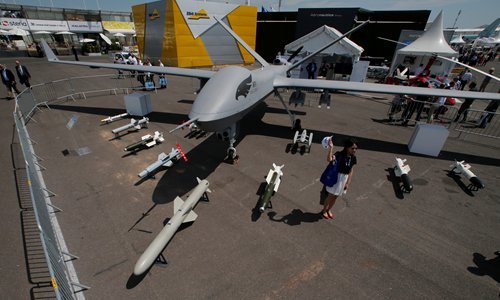 Air Commodore Ibikunle Daramola, the Director of Public Relations and Information of the Nigerian Air Force Headquarters, was quoted by the report as saying that Nigeria has joined China and the UAE as the only countries operating the Wing Loong II unmanned combat aerial vehicle.

The two Nigerian Air Force Wing Loong IIs, which can stay airborne for 31 hours in intelligence, surveillance and reconnaissance mode and 26 hours in offensive roles, will add significant value to counter-insurgency and anti-banditry operations, the official said.

A Chinese military expert told the Global Times on condition of anonymity that the arms sale will further open up the global military drone market for Chinese defense firms, particularly in Africa.

China's drones have unique advantages on the international arms market, due to mature drone technologies, complete systems for setups, a variety of types and sizes of drones, much lower prices compared to Western products, and complete service chains including training and maintenance, the expert said.

In small scale conflicts, Chinese drones have carried out accurate reconnaissance and precision strikes on targets even in complicated terrain and weather conditions, Wang said, noting that this makes Chinese drones combat-proven.

Users of Chinese drones can rapidly boost their combat capabilities in domestic security issues and in regional conflicts, Wang said.

The Wing Long series also includes the original Wing Loong I and the upgraded Wing Loong I-D. As of December 2018, AVIC has exported 100 Wing Loong series drones since 2010, Xinhua said in a separate report at that time. More drones are believed to have been exported over the past two years.