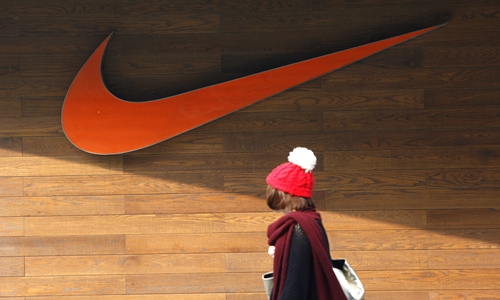 A pedestrian passes by a Nike store in Beijing. (Photo: cnsphoto)

Embattled Nike caused widespread criticism on the Chinese internet as a sales worker in Kunming, Southwest China's Yunnan Province, allegedly discriminated against a migrant worker's family, dealing a further blow to the brand's sales performance in one of its most important markets following the Xinjiang cotton incident.

A 44-year-old migrant worker named Mao Zhigao and his wife took their three children to a Nike store in Kunming on August 13 afternoon. When they accompanied their daughter to pick clothes at the women zone, their junior son, aged 9, ran to them with tears in his eyes. The son said that he had picked two clothes but the saleswoman grabbed the clothes from him and put them back on the shelves, ctdsb.net, a news portal affiliated with Hubei Daily Media Group reported on Friday.

Mao believed that the Nike saleswoman had discriminated against his family because of the torn clothes he wore on that day.

"To safeguard the dignity of their son, Mao's wife got into physical confrontation with the saleswoman," the report said, adding that there were several scratches on his wife's neck.

With the help of the policemen, they obtained a video clip of what happened to their child. When the family confirmed that the saleswoman grabbed clothes from their son, Mao immediately called Nike's hotline to complain about their encounter at the store and hoped the worker could apologize, the report said.

But they received no immediate response. Only six days later, they received a phone call from a Nike staffer responsible for the region. The staffer apologized to the family in the call and invited them to visit the store again, but they refused.

According to a report by xxcb.cn, Nike said in a statement that the company made a sincere apology to the family and has fired the sales worker. In a video posted on Chinese Twitter-like microblog Sina Weibo on Friday, Mao said he wants no compensation from Nike and will never shop at Nike stores in the future. "The incident has cast a deep psychological shadow," he said.

The hashtag "A Nike employee that discriminated against migrant workers has been fired" trended on Sina Weibo. Netizens expressed criticism toward the Nike sales person, and many called for a continuous boycott of the brand for its involvement in the Xinjiang cotton incident.

Nike is among a number of Western retailers including Adidas and H&M that have been facing a backlash in the Chinese market over their previous support to the Western-led boycott on cotton sourced from Northwest China's Xinjiang Uygur Autonomous Region over groundless claims of forced labor.

The brand's fourth-quarter earnings in greater China of the fiscal year stood at $1.93 billion, missing analysts' expectations of $2.25 billion.