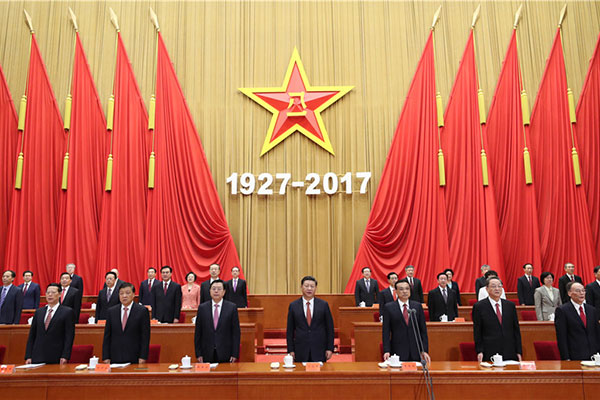 Senior leaders of the Communist Party of China (CPC) on Friday agreed that the proposal to amend the country's Constitution should only include "changes to part of it, not revision on a large scale."Members of the Political Bureau of the CPC Central Committee at a meeting stressed that upholding the Party's leadership and reflecting the will of the people should be the principles for amending the Constitution.Xi Jinping, general secretary of the CPC Central Committee, presided over the meeting.The amending of the Constitution must follow due process, be based on broad consensus, and ensure the Constitution's consistency, stability and authority, participants in the meeting agreed.They listened to a report about opinions collected from Party members and those outside the CPC on a draft proposal by the CPC Central Committee on the amendment.They held discussions on the document and decided to further revise the draft according to the discussions and to submit the revised draft to the second plenary session of the 19th CPC Central Committee, to be held from Jan. 18 to 19.The current Constitution has played an important role in the process of reform, opening-up and socialist modernization drive as well as the Party's governance of the country, said a statement issued after the meeting."The Constitution has been proven to be a good legislation that fits in China's reality and meets demands of the times," the statement said.The Constitution has established a series of fundamental systems, principles and rules for China and introduced a number of basic policies, including the CPC's leadership, the state system as a socialist state under the people's democratic dictatorship led by the working class and based on the alliance of workers and peasants, as well as the system of people's congresses.The CPC leaders agreed that the systems, principles and policies established by the Constitution should be fully implemented for the long run.The CPC has always placed great importance on the authority and effect of the Constitution, which reflects the common will and basic interest of all Chinese people, the statement said. "The CPC holds that law-based governance is meant to be based on the Constitution in the first place."The CPC has made effective political and institutional efforts to guarantee and supervise the implementation of the Constitution, the statement said.The statement noted that amending the Constitution is a major event in the country's political life and a major decision of the CPC Central Committee.It is necessary to constitutionalize the important achievements of the Party and the people in advancing theoretical, practical and institutional explorations, the statement said.It stressed holding high the great banner of socialism with Chinese characteristics and fully implementing the spirit of the 19th CPC National Congress in amending the Constitution.The amending process should take Marxism-Leninism, Mao Zedong Thought, Deng Xiaoping Theory, the Theory of Three Represents, the Scientific Outlook on Development, and Xi Jinping Thought on Socialism with Chinese Characteristics for a New Era as the guide, it said.