CHINA No order from central gov't to HKSAR over fugitive bill

No order from central gov't to HKSAR over fugitive bill 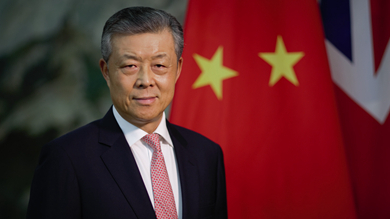 The authorities of the Hong Kong Special Administrative Region (SAR) did not receive any instruction or order from Beijing to introduce the now-suspended fugitive bill, said Chinese Ambassador to Britain Liu Xiaoming in a BBC interview on Sunday.

"It's an initiative launched by the Hong Kong government to make Hong Kong system more perfect, to improve the legal system," Liu said of the amendments to the Fugitive Offenders Ordinance and Mutual Legal Assistance in Criminal Matters Ordinance.

The proposed changes were suspended after they received mixed reaction from the Hong Kong society and triggered demonstrations, mostly peaceful but in some cases violent. On one occasion last Monday, protesters stormed the Legislative Council (LegCo), smashing windows, defacing rooms and damaging the security and communications systems, despite the halt in discussions on the changes.

The ambassador has also delivered the central government's unswerving adherence to the principles of "One Country, Two Systems," "Hong Kong people governing Hong Kong," and the high degree of the region's autonomy.

"On every step of the way, we let the Hong Kong government handle [its own affairs]," Liu said, adding that he had full confidence in Hong Kong's ability to resolve problems.

"And it shows that, they are capable of handling this situation."

The Chinese diplomat reiterated his strong opposition to the UK interfering in Hong Kong's internal affairs, saying they are "obstructing the legal process." Earlier this week, at a press conference held at the Chinese embassy in London, Liu told the British government to take its "hands off Hong Kong and show respect."

That presser followed British Foreign Secretary Jeremy Hunt's call for Beijing to honor the Sino-British Joint Declaration, which was signed in 1984, warning that "there will be serious consequences if that internationally binding legal agreement were not to be honored."

"It is the British government that is trying to interfere, voicing support for the demonstrators. When these rioters stormed the LegCo, they even said: 'You can't use this violence as a pretext for repression'," Liu said.

Liu noted that Beijing does not want a diplomatic clash with London but it rejects the "Cold War mentality" displayed by some British politicians.

The ambassador also explained the significance of the bill.

"The chief executive and the Hong Kong government want to make Hong Kong a safer place rather than a safe haven for fugitive criminals," Liu said, adding that the region has yet to make extradition agreements with more than 170 countries and regions.

"So if some people commit a crime outside of Hong Kong and return to Hong Kong, Hong Kong cannot punish them," he said. "And that bill can unplug the loopholes."