No plan to clone humans after macaque success: Chinese scientist 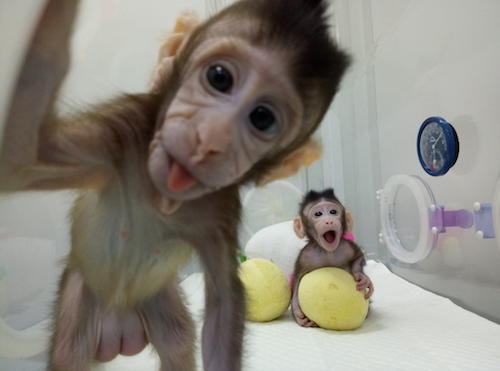 The Chinese research team that was the first to successfully clone macaques has asserted no plans to conduct similar research on humans, in response to ethical discussions after the breakthrough.
"We have no plan to clone humans, and social ethics would by no means allow that practice," said Muming Poo, co-author of the macaque study, which was published on the website of the scientific journal, Cell.
As technology for the cloning of primates has been solved, theoretically humans can be cloned, said Poo, who directs the Institute of Neuroscience (ION) and Center for Excellence in Brain Science and Intelligence Technology, the Chinese Academy of Sciences.
However, the macaque study was aimed at better understanding and treating human brain diseases, such as the Alzheimer's and autism, he said.
The cloning of macaques would greatly reduce the number of monkeys used for animal testing in labs, Poo said, adding that pharmaceutical enterprises in the United States and Europe import tens of thousands of monkeys a year for drug trials.
The technology is also expected to help preserve endangered animals, for example, golden monkeys, Poo said.
"Just like nuclear power and artificial intelligence, cloning technology is also a double-edged sword," said Sun Qiang, director of the ION Nonhuman Primate Research Facility.
Sun called for international regulations to prevent and ban the inappropriate use of cloning technology.