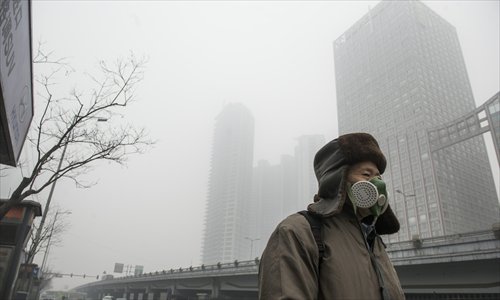 A man wearing a mask walks along a smog-shrouded street in Beijing, the capital of China, on January 29, 2013. (Photo: Global Times)

The El Nino weather pattern may lead to more smog in North China, experts said citing weaker north wind caused by El Nino, the China Youth Daily reported on Monday.There is a 75 to 80 percent chance of an El Nino developing by February 2019, although it is not expected to be a strong event, according to the latest update from the World Meteorological Organization (WMO).Zhou Tianjun, a research fellow from the Institute of Atmospheric Physics of the Chinese Academy of Sciences, said that if the prediction by the WMO is accurate, the southern part of China will experience warmer and more humid weather.El Nino is a naturally occurring phenomenon involving fluctuations of ocean surface temperatures in the equatorial Pacific, coupled with changes in the overlying atmospheric circulation. It has a major influence on weather and climate patterns across many parts of the world.Liu Yanju, a senior research fellow from the National Climate Center, said that El Nino has a great influence on the smog in northern China during the winter.According to monitoring data from the National Climate Center, during the winter in an El Nino year, there will be an anticyclone in the northwest Pacific Ocean, which makes it easy for pollution to move to North China."With the increasing sea temperature in the next months, the El Nino weather pattern will be stronger and smog will occur more often in North China compared to previously," Liu said.He Chao, a professor from Jinan University in South China's Guangdong Province, said that during winter of an El Nino year, there is more rain in southern China, which decreases the smog, and El Nino also weakens the north wind, which decreases its power to disperse pollution.