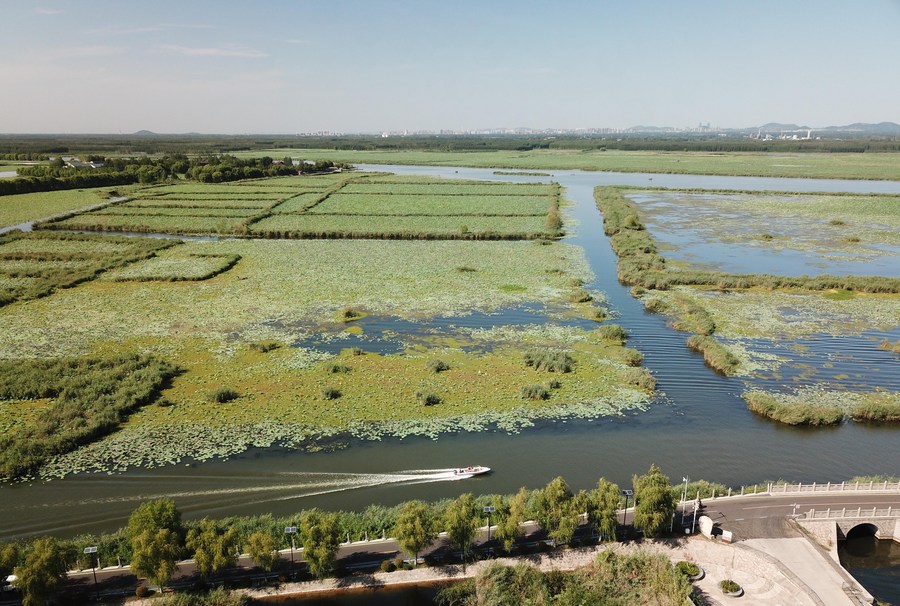 Weishan Lake is the largest freshwater lake in northern China and a hub of the Beijing-Hangzhou Grand Canal -- a world heritage site. However, local traditional industries used to cause serious pollution in the lake.

The heavy pollution was a wake-up call to the locals -- a stark reminder that natural resources should be cherished and used in a more sustainable way.

Weishan and three other lakes together form Nansi Lake and the locals often refer to Nansi Lake by its signature Weishan Lake.

About four decades ago, Nansi Lake was home to the Baer's Pochard, a national first-class protected diving duck in China. However, these lovely little elves gradually disappeared.

People soon found the answer as to why these ducks disappeared. There were 4,000 sewage stations along the 53 rivers which run into Nansi Lake, pouring waste water into the lake. At that time, Weishan Lake was filled with nothing but odorous water, filthy foam and dead fish.

In recent years, a combination of administrative, juridical and technological measures has come into play for the restoration of the ecological environment. Water area occupied by aquaculture was reduced, some enterprises were closed down or relocated, and the pollution discharge standards were gradually raised.

Regional cooperation mechanisms were also established. All cities and counties in the Nansi basin signed agreements on joint pollution prevention and ecological compensation.

In February 2021, people were surprised to re-encounter the Baer's Pochard over Nansi Lake. The water quality has improved dramatically, as evidenced by the return of wild birds.

To safeguard the freshwater lake, more environmental protection moves have followed the local protection policy of "returning ponds back to the lake," which means fishery activities are kept under strict control around the lake. In recent years, the fish farming areas around Weishan Lake have been reduced by 218,700 mu (about 14,580 hectares).

In contrast to the overdeveloped fishery in the past, the local government has developed a new model of ecological fish farming, which is also used to develop the rural tourism.

In early autumn, in Gaolou Township, Weishan County, green lotus leaves are growing everywhere in Weishan Lake. Lotus roots have little impact on the quality of water, for they need few pesticides. The remaining parts of them, after being reaped, can become food for crayfish, helping save feed costs.

Weishan Lake now covers an area of 1,266 square km with excellent water quality, as the local government practices the concept of "lucid waters and lush mountains are invaluable assets," and promotes the high-quality development of fisheries.

In a newly-built modern fishery industrial park in Weishan County, intelligent breeding robots are not the only stars. Physical and biological filtration, disinfection, oxygenation as well as denitrification facilities have functioned in combination to realize the modernization of the fishery.

According to Mou Changjun, director of the county's fisheries aquaculture experiment center, funds amounting to 1.62 billion yuan (about 232 million U.S. dollars) have been invested in the industrial park. Nine high-standard circulating water breeding workshops have been built in the center. With a total water space of 12,000 cubic meters, the park's annual breeding capacity can reach 5 billion fish fries.

In July, Weishan Lake was graded as a national 5A tourist attraction and the number of visitors attracted to the lake soared to 300,000 in that month.

Daguan Village is the gateway to Weishan Island, the largest island and the most popular tourist destination around the lake. "About 60 to 70 percent of all our villagers are involved in tourism businesses including running restaurants, hotels, and selling lake specialties. Our village's collective economy has developed to an entity which can generate an annual income of more than 600,000 yuan," said Yin Zhaoshan, Party chief of the village.