The city of Dandong, which borders North Korea in Northeast China's Liaoning Province, was hoping to welcome North Korean leader Kim Jong-un's train on Saturday, and the city had apparently put on a light show on the landmark China-North Korea Friendship Bridge and enhanced street patrols, say local residents. 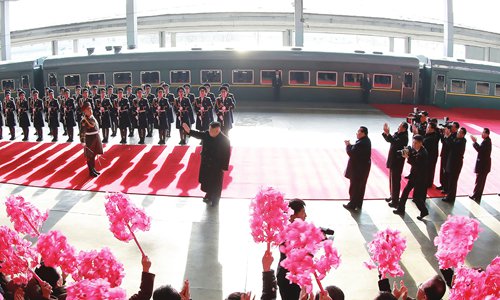 According to media reports, Kim set off by train to Vietnam on Saturday for his second meeting with US President Donald Trump in Hanoi on February 27 and 28.

No details of the North Korean leader's travel arrangements have been officially released.

South Korean news agency Yonhap, however, reported on Saturday that a train, with Kim likely on board, was due to arrive in Dandong around 9:40 pm on Saturday, and it was expected to arrive in Beijing on Sunday.

A display of lights was seen along the China-North Korea Friendship Bridge which links the two contries around 8 pm on Saturday, a local resident told the Global Times.

He said that normally the lights are turned off to save energy, and are seen only when "important guests" arrive.

Lights of all the guest rooms in the Dandong Zhonglian Hotel, which is next to the bridge, were turned off on Saturday night. This was another sign that "important figures" from North Korea were coming to the city, local residents say.

A resident contacted by the Global Times said that police were seen patrolling the streets on Saturday evening, while another resident said several streets had been cordoned off at around 10 pm.

If Kim has chosen to travel by train and expects to arrive in Hanoi on February 25, he would have needed to depart Pyongyang sometime Saturday, Lü Chao, a research fellow at the Liaoning Academy of Social Sciences, told the Global Times.

The distance between Pyangyang, capital of North Korea, and Hanoi, capital of Vietnam, is more than 4,500 kilometres by train.

If Kim makes the entire trip by train, China will have a lot of work to do to make proper track and hospitality arrangements, said Lü.

It's unlikely Kim will change to a high-speed train while traveling through China. "The North Korean leader's special train is armed and bulletproof, and Chinese high-speed trains cannot meet those requirements," Lü noted.

Kim's train will stop at the Vietnamese border station of Dong Dang, where he will disembark and drive 170 kilometres to Hanoi by car, Reuters quoted sources as saying on Wednesday.

Lü said it is possible for the North Korean leader to take a train through part of China but then take a flight for the last leg of his journey to Vietnam.

The distance between Pyongyang and Hanoi by air is 2,700 kilometers and it takes 3.5 hours on a special aircraft, according to Yonhap.

The North Korean leader's travel time by train would likely be more than over 48 hours, according to the Tass News Agency.