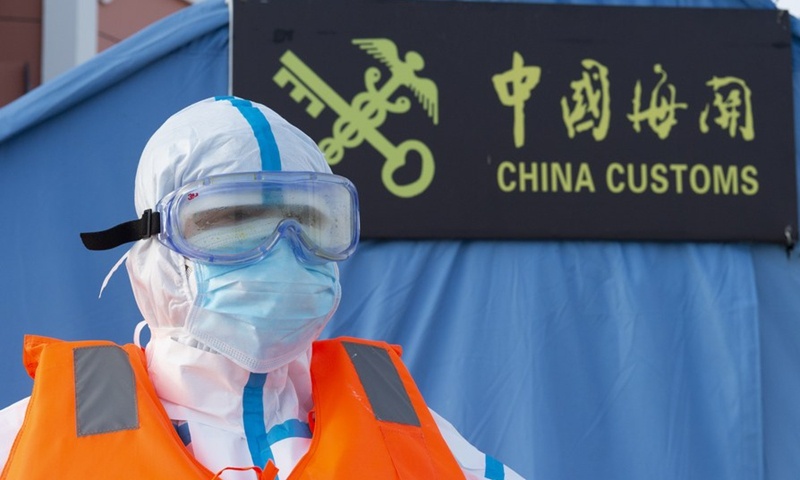 A member of staff prepares to inspect an inbound ship at the port of Fuyuan in northeast China's Heilongjiang Province, Aug. 13, 2020. The port of Fuyuan, which mainly exports vegetables, fruits and engineering machinery and imports wood, soybeans and flour, has been carrying out strict measures against COVID-19, making sure that all personnel are healthy and all goods are disinfected while maintaining a smooth transportation process. (Photo: Xinhua)

China's exports jumped to record levels in November, offering fresh evidence of the world's second-largest economy's solid recovery from the COVID-19 pandemic that continues to ravage many major economies, while slower growth in imports also underscored persistent pressure on domestic demand from the virus.

During the month, exports jumped 21.1 percent year-on-year, stronger than October's growth rate of 11.4 percent and beating market expectations of around 12-percent growth, according to data from the General Administration of Customs (GAC) on Monday. That brings November's exports to a record high of $268 billion. 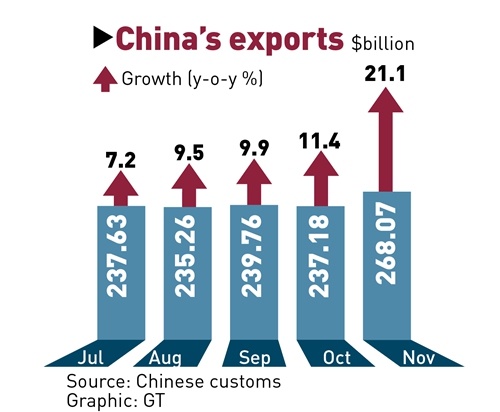 "The strong rebound is another indication that the Chinese economy remains firmly on a solid recovery trajectory," Cao Heping, an economist at Peking University, told the Global Times on Monday, noting that China's manufacturing sector is back in full swing, as factories in other countries continue to be hit by the pandemic.

The record exports were supported by strong foreign demand for medical supplies and other pandemic-related products, including electronic devices for working from home. In the first 11 months, exports of medical equipment jumped 42.5 percent year-on-year, while home appliances exports rose by 20.6 percent year-on-year.

"It looks like the capability of China's role as the world's factory is on full display," Cao said.

Strong demand for Chinese products also came from almost all major economies, with exports to the Association of Southeast Asian Nations, which remains China's top trading partner, rising 5.8 percent. Exports to the EU and the US grew by 5.7 percent each.

"The strong demand will likely persist through the first quarter of next year, as the pandemic continues to hit other economies, and the exports will offer great support to China's GDP growth," Tian Yun, a vice director of the Beijing Economic Operation Association, told the Global Times on Monday, noting China's GDP growth will see a strong rebound next year.

Some Chinese economists predicted that China's GDP could grow by 2 percent this year and by 8-9 percent in 2021. In the fourth quarter of 2020, GDP growth could reach 6 percent, compared with 4.9 percent in the third quarter, according to Tian.

However, Tian said that the slow recovery in imports in November also showed lingering pressure on domestic demand. In the month, total imports grew 4.5 percent year-on-year, down from 4.7 percent growth in October.

"We need to pay attention to slow rebound in imports because that says a lot about domestic demand, including consumption and investment," Tian said.

The record growth of exports coupled with slower import growth resulted in a sharp surge in China's trade surplus. In November, the surplus jumped 102 percent year-on-year to a staggering $75.42 billion.

The trade surplus with the US - a sensitive figure for US President Donald Trump who waged a relentless trade war with China over the US' massive trade deficit with China - also expanded nearly $6 billion from October to hit $37.42 billion in November.

Cao said that the unabated COVID-19 in many countries and the US-China trade tensions also weighed on China's imports, as the supply of some foreign goods was disrupted. "I think the slower growth in imports has much to do with the pandemic and trade tensions," he said.

While growth in overall imports slowed, imports of certain items increased significantly. Meat imports grew 65.6 percent in the first 11 months of the year, while soybean imports grew 15.2 percent. China has been expanding its purchases of US agricultural products, including soybeans, under the phase one trade agreement.

Despite the COVID-19 pandemic and trade tensions, China's foreign trade has great potential in the coming years, given the nation's robust manufacturing sector and favorable market conditions overseas with a range of trade agreements, including the recently signed Regional Comprehensive Economic Partnership, according to Cao.

"The pandemic hit China's trade very badly early in the year, but 2020 has turned out to be a great year for China's trade, not just in terms of growth but also all the [free trade agreements]," he said.