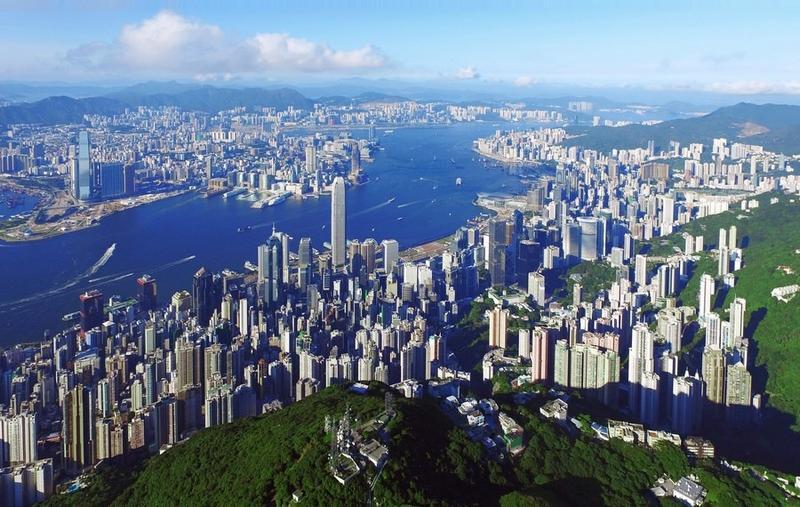 An aerial photo taken on June 27, 2017 shows the scenery on both sides of Victoria Harbour in Hong Kong. (Photo: Xinhua)

HONG KONG - The decision by the National People's Congress (NPC) on improving Hong Kong's electoral system serves to plug the electoral loopholes of Hong Kong and will benefit for its long-term prosperity and stability, various sectors in Hong Kong said.

The NPC, China's top legislature, on Thursday adopted a decision on improving the electoral system of the Hong Kong Special Administrative Region (HKSAR). The decision was passed by an overwhelming majority vote at the fourth session of the 13th NPC.

Tam Yiu-chung, a member of the NPC Standing Committee, said that improving the electoral system of the HKSAR can help the local Legislative Council (LegCo) avoid being stormed and paralyzed so that normal operation of the HKSAR government will be ensured.

The adopted decision will help bring long-term prosperity and stability to Hong Kong and enable the steady and sustained implementation of "one country, two systems", said Tam.

Hong Kong should be administered by patriots and pledging allegiance to the country is a universal fundamental requirement, she said.

According to Starry Lee Wai-king, chairperson of the Democratic Alliance for the Betterment and Progress of Hong Kong, Regina Ip Lau Suk-yee, chairperson of the New People's Party, Kenneth Fok Kai-kong, vice chairman of the All-China Youth Federation, the NPC decision is a necessary and timely move to plug the loopholes of the current electoral system, ensure "patriots administering Hong Kong", and facilitate Hong Kong's transition from chaos to stability.

Jonathan Choi Koon-shum, a member of the Standing Committee of the Chinese People's Political Consultative Conference (CPPCC) National Committee, said that the NPC decision helps expand the political participation of all sectors in Hong Kong, which guarantees the democratic rights of Hong Kong residents.

Lam Kin-ngok, a member of the Standing Committee of the CPPCC National Committee and chairman of the Hong Kong Trade Development Council, and Chan Hiu-fung, head of the Hong Kong and Mainland Legal Profession Association, said after the implementation of the NPC decision, Hong Kong will improve the governance efficiency, get greater trust and support from the central authorities, and better integrate itself in the national development landscape.

Chan Ching-chuen, an academician of the Chinese Academy of Engineering and honorary professor of the University of Hong Kong, said the related contents concerning Hong Kong in the 14th Five Year Plan is like putting a pair of wings to Hong Kong's development, one is a safe and free environment, the other is development opportunities.

Yuen Mo, chairman of the Chinese General Chamber of Commerce of Hong Kong and Ho Hon-kuen, chairman of Education Convergence of Hong Kong, expected the HKSAR government to push for cooperation of various sectors of the Hong Kong society in improving the local electoral system and to start the work related to the needed local legislations at an early date.