CHINA NPC to decide on legislative operation in HK over deferral

NPC to decide on legislative operation in HK over deferral 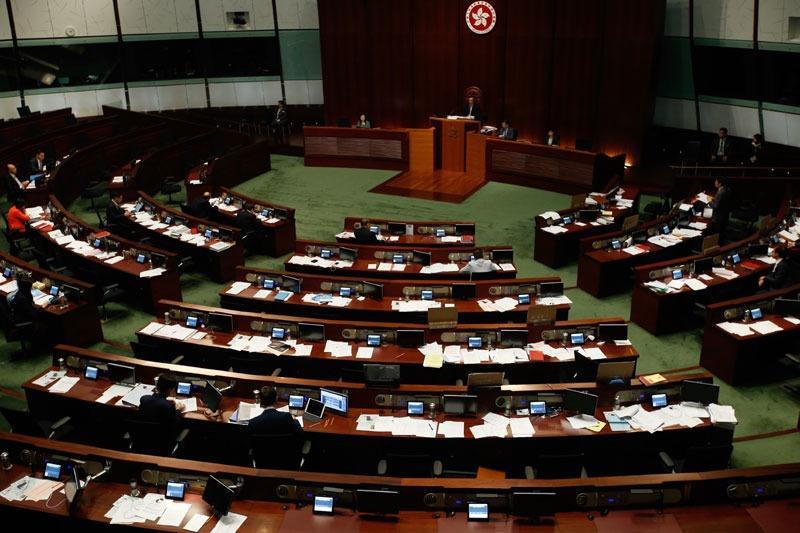 Lawmakers attend a meeting at the Legislative Council in Hong Kong, on June 14, 2018. (Photo: CHINA DAILY)

China's top legislative body has started deliberating a bill during its four-day meeting since Saturday to decide on the arrangements of the normal operation of the Hong Kong Legislative Council after the postponement of its election.

The State Council has submitted a bill to the Standing Committee of the National People's Congress requesting the top legislature to make a decision on the continued operation of the sixth Hong Kong LegCo after the election for the seventh LegCo, originally scheduled for Sept 6, was postponed for one year due to the novel coronavirus pandemic.

In a report submitted to the central government on July 28, Hong Kong Chief Executive Carrie Lam Cheng Yuet-ngor said the postponement was made due to the recent COVID-19 situation in the city and asked the central government to make relevant arrangements for the vacancies in the Legislative Council in the coming year.

He said the State Council believed the postponement decision was made based on Hong Kong's Emergency Regulations Ordinance and is necessary and appropriate considering the current development of the COVID-19 pandemic in the region. It is also in line with public interests and can protect public safety while guaranteeing a fair election.

The State Council issued a letter to Lam on July 29 stating that the central government supported the postponement.

The NPC Standing Committee making relevant decisions on the vacancies in the Legislative Council after the postponement in line with the law was necessary to ensure the normal functioning of the Hong Kong government and society and to maintain the prosperity and stability of Hong Kong, according to the State Council.

"For the NPC Standing Committee to look at it is in the best interests of Hong Kong, to tell us the best way forward," Tang said. "This is a legal, rational and logical way to address the legislative vacuum."

Hong Kong officials have welcomed the NPC Standing Committee's deliberation. Hong Kong NPC Deputy Ip Kwok-him, who is also an executive councilor, said the deliberation on the operation of the Legislative Council is "justified and legitimate", as only the top legislative body is entitled to make such a decision.

Ip said whatever decision is made, he hopes Hong Kong legislators can set aside political disputes and focus on anti-pandemic issues to help the city overcome the virus with minimum losses.

Rita Fan Hsu Lai-tai, former president of the Legislative Council and a former NPC Standing Committee member, said it is a timely decision to discuss the issue before the council's current term ends on Sept 30.

"It is the best time for the NPC Standing Committee to deliberate and consider all possibilities and consequences," Fan said.

Hong Kong has seen a resurgence of the pandemic since early July, with 1,852 additional COVID-19 cases reported between July 8 and July 30, a 140 percent increase from the total number of cases recorded over the previous six months, Lam said at a news conference.