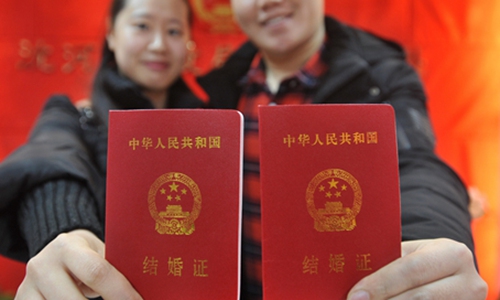 The number of registered married couples hit a 10-year low in China in 2019, said the Ministry of Civil Affairs (MCA) on Sunday, attributing the reason behind the drop to people's changing views on marriage and the decline in the marriageable population.

Around 9.47 million couples tied the knot in 2019, marking the first time the number of registered married couples was below 10 million, said Yang Zongtao, an official of the MCA, at a Sunday conference.

He said that China's marriage rate has been declining since 2014 due to the decline in the population of suitable marrying age. China has implemented the one-child policy since the 1970s and the 1980s. The decline in the number of newborn babies during that period is the main reason for the current drop in marriage rates, said Yang.

Another reason is that with the development of the economy and society, many people's concept of marriage has changed, Yang noted, adding that it is now common practice for people to marry late or even stay single for their whole lives. Moreover, as more young people are now better educated, they continually postpone their marriage, resulting in many people of marriageable age not getting married.

The declining number of people getting married has led to a declining number of newborns, which has a negative impact on the development of society, said Yang. He said that the relevant departments will map out policies to guide people to have positive concepts of love and marriage, and hopes that all of society will create beneficial conditions and care about marriageable people's problems.

Zhou Haiwang, a deputy director from Institute of Population and Development, Shanghai Academy of Social Sciences, told the Global Times on Sunday that the drop in population born in the mid-1990s is the major reason for the decline of marriage rates in recent years. "But the decline is periodic. With the marriageable population increasing, marriage rates will pick up again in a few years."

Meanwhile, 4.15 million couples registered for divorce across China in 2019, according to MCA, adding that the statistics for divorce rates are still being calculated.